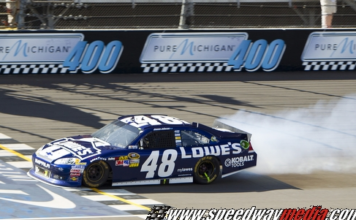 [/media-credit]Is Hendrick Motorsports bending the rules? Brad Keselowski thinks so. It’s not beyond the realm of possibility. Of course you remember all those times Crew Chief Chad Knaus was suspended and fined? Certainly, like when you were in school, once guilty and always suspected was the rule. That may be part of it but Jimmie Johnson coming from the back of the pack to leading the race  until his engine expired has lots of folks wondering.

Keselowski commented during the race on how Hendrick cars used what he called “tricks” with their cars. Jack Roush and winner Greg Biffle mentioned at Michigan how they “fell behind” on some things, especially on Carl Edwards’ cars and had to get up to speed on certain things. It has opened up a new can of worms, but is it sour grapes or is it a legitimate gripe? Maybe the Hendrick Motorsports cars have people who just are smarter than other team’s engineers and technicians. No, do not shoot the messenger.

“There’s parts and pieces that move on the car after inspection that make the (Hendrick) cars more competitive,” Keselowski said. “Some guys have it and some don’t. There’s a question as to the interpretation of the rule.”

One thing is certain, Keselowski is outspoken and doesn’t pull any punches. He has been watching the HMS cars all season long, and his inability to compete with them over the last few races has him frustrated. Remember this is the same man I wrote about last week after a battle with Marcos Ambrose at Watkins Glen. He doesn’t mind getting beat, but he wants to be on an even playing field. He pointed a finger at his own organization, Penske Racing for racing fairly without pushing the envelope between getting by with something and getting caught.

“As a group at Penske racing, we have not felt comfortable enough to risk that name and reputation that roger has over those parts and pieces. Others have, which is their prerogative,” Keselowski said. “Living in the gray area …We’re going to have to make a re-evaluation of that internally to decide if that’s the right way to go.”

I found it interesting that after the race, NASCAR took six or seven cars back to their R&D center to inspect them. “Sometimes, it’s easier to take the whole car than just the engine,” Robin Pemberton said in an interview with Sirius-XM radio. What cars they took was a mystery at the time of this column.

Ron Fleshmanhttp://www.ris-news.com
Ron Fleshman has followed NASCAR racing since attending his first race at Martinsville Speedway in 1964. He joined the Motor Sports Forum on the CompuServe network in the 1980s and became a reporter for Racing Information Systems in 1994. In 2002, he was named NASCAR Editor for RIS when it appeared on the World Wide Web as www.motorsportsforum.com. He can now be found at www.ris-news.com. Ron is a member of the American Auto Racing Writers and Broadcasters Association. You can find Ron following and reporting on the top three NASCAR divisions each week. As a lifer in his support of racing, he attends and reports on nearly 30 events a year and as a member of the motor sports media, his passion has been racing for 47 years. He lives with his family in rural West Virginia and works in the insurance industry when not on the road to another track.
Previous article
Cale Gale Bristol Motor Speedway Event Preview
Next article
Pure Michigan 400 Review: Bizzare Day at Michigan