Surprising and Not Surprising: Advocare 500 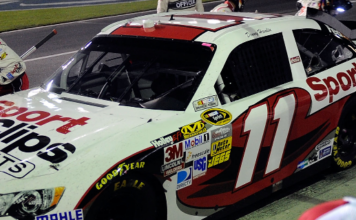 [/media-credit]From daylight to darkness over the Labor Day holiday weekend, here is what was surprising and not surprising in the 53rd annual Advocare 500 at Atlanta Motor Speedway.

Surprising:  While stock car racing often focuses on the skills of the driver, the race winner surprisingly took little credit for his first ever Atlanta win, instead attributing the victory to his crew chief and team.

Denny Hamlin, in the No. 11 Sport Clips Toyota, scored his 21st career victory and his fourth victory of the 2012 season. And with all that, he locked himself not only into a Chase berth, but a top seed with his multiple victories.

“This has been something in the works for a very long time,” Hamlin said. “I have a lot of wins in my career because of two very important guys.”

“One is Darian (Grubb, crew chief) and the other is Mike Ford (Hamlin’s prior crew chief),” Hamlin continued. “Mike put together 80% of a championship winning team, and Darian has just filled that gap and put the rest of the pieces of the puzzle together.”

“The pit crew nailed it,” Hamlin said of his team’s Atlanta performance. “They were just on it all day long.”

“I’ve never seen our crew just so happy to be at the race track every single week.”

Not Surprising:  Yes, regrets they have got a few, particularly runner up Jeff Gordon and fourth place finisher Martin Truex Jr.

“I’m just mad at myself right now,” the driver of the No. 24 Dupont Chevrolet said after almost catching the race winner during the green, white, checkered finish. “I guess I’m just getting soft in my old age.”

“I’m too nice because, I don’t know, 15 years ago I would have just moved him right up the race track,” Gordon continued. “I don’t know why I didn’t do that.”

The driver of the No. 56 NAPA Shocks Toyota was also full of regrets after leading in the waning laps until the final caution came out for Jamie McMurray’s crash.

“Just spun the tires,” Truex said of his restart. “It just wasn’t meant to be, I guess.”

“It’s tough losing when you haven’t won in a long time,” Truex continued. “We were close.”

“It just sucks we couldn’t get it done tonight.”

In spite of his regrets about not winning, Truex Jr. did lock himself into the championship Chase, as well as locking into a three year contract continuation with Michael Waltrip Racing.

Jeff Gordon, on the other hand, moved up one position in the point standings to 13th, but still remains outside of wild card contention and will have to finish ahead of Kyle Busch in the Richmond race in order to capture that Chase spot.

Surprising:  While usually the first one to grab the microphone and most certainly one of the most verbal drivers, whether in the media center or on the grid, Carl Edwards was surprisingly at a loss for words as his engine, as well as his Chase hopes, seemingly went up in smoke.

“I don’t even know what to say,” the driver of the No. 99 Subway Ford Fusion said. “This is not the interview I wanted to do after the race.”

“I love this race track but it looks like a piston or something broke,” Edwards said regarding his engine woes. “It started making noise with about 25 to 30 laps to go.”

“I mean, I just can’t believe this,” Edwards continued. “That’s just how our season has been going and I don’t know what the reason is.”

Edwards dropped two positions to 14th in the point standings after his 36th place finish at Atlanta.

Not Surprising:  In spite of a most bitter Nationwide race battle, involving water bottle throwing and cheek ‘patting’, both drivers put aside their differences to finish top-5 at Atlanta, resulting in two Chase clinches.

Keselowski, behind the wheel of the No. 2 Miller Lite Dodge, finished third, scoring his second top-10 finish at Atlanta. Harvick, piloting the No. 29 Rheem Chevrolet, finished in the fifth spot.

And yes, both drivers pronounced their finishes good.

“Yeah, just a solid night,” Keselowski said. “Once again the 2 team stepped up, made great changes, and we are just proud of that effort.”

“I’m proud to say we clinched our spot in the Chase.”

“This was just a great night for our Rheem team,” Harvick said. “Things are going in the right direction and thanks to this solid run, we have clinched a post in the Chase.”

Surprising:  As if losing one of his primary sponsors, Office Depot, was not enough, Tony Stewart added insult to injury by falling like a rock from his pole starting spot to finish 22nd, one lap down.

“We just couldn’t get a handle on this thing tonight,” the driver of the No. 14 Office Depot/Mobil 1 Chevy said. “I was just to free.”

“We chased it all night,” Smoke continued. “We’ll go back to the shop, tear it apart and see what the deal is.”

Stewart remains in the tenth spot in the point standings.

Not Surprising:   While Stewart struggled, teammate Ryan Newman affirmed his mission after the race, which saw the driver of the No. 39 Army Medicine Chevrolet finish 35th after an on-track incident with five-time champ Jimmie Johnson and fall out of wild card contention.

“All I know was we ran out of room on the restart there,” Newman said. “It wasn’t my fault but it was just racing.”

“In the big picture, tonight’s result hurt us relative to the Chase,” Newman continued. “But the US Army soldiers we represent are known for their refusal to accept defeat.”

“The battle is certainly not over,” Newman said. “Our mission is clear.”

Surprising:  While Newman may have seen it as just racing and Sam Hornish Jr. was just caught up in it all, Jimmie Johnson seemed surprisingly befuddled by the wreck on Lap 269, as in his mind, he was just easing on down the race track.

“I think the No. 39 was on the outside and the No. 22 was next to me; we just all converged at one spot,” Johnson said. “All I know is I was riding down the road and left plenty of room on the outside of me and got turned head on into the wall.”

The driver of the No. 48 Lowe’s/Kobalt Tools Chevrolet finished 34th and fell two positions in the point standings to fourth. Johnson was, however, already locked into the Chase competition.

Not Surprising:  Danica Patrick can finally claim ‘mission accomplished’ after checking off her ‘to do ‘list’ of finishing the race with all of the fenders intact on her No. 10 GoDaddy.com Chevrolet.

“Yeah, that was what we were supposed to do today,” Patrick said of her 29th finish in her first race at Atlanta in a Cup car. “We were just in that phase of get the laps done, feel it out, run different lines, bring the car home, finish the race and try and learn a bit as we go.”

“I think that was a good step for me,” Patrick said. “We did what we meant to do.”

Surprising:  Dale Earnhardt Jr.’s crew chief Steve Letarte has been called many things, but what his current driver called him was a bit surprising.

“Steve Letarte is really experienced and did a lot of crafty stuff to get us back into position,” Dale Junior said. “That’s about the only thing I think we can take away from that track.”

The driver of the No. 88 Diet Mountain Dew/National Guard Chevrolet already locked into the championship show, finished 7th in the Atlanta race before the Chase. He now is second in the point standings, just eight points back from leader Greg Biffle.

Not Surprising:  In spite of the penalty cloud still hanging over their heads, Paul Menard, in the No. 27 Quaker State/Menards Chevrolet, and crew chief Slugger Labbe pulled of an eighth place finish.

“We kept making the car better,” Menards said. “As the sun went down, we got better, made the right adjustments, and came away with another top-10.”

Surprising:  Kasey Kahne seemed absolutely surprised that he didn’t fall further than 11th in the points with his 23rd place finish.

“We just really missed it tonight,” the driver of the No. 5 Hendrickcars.com Chevrolet said. “The harder I drove, the worse I was.”

“But we’re still in 11th and have two wins and I think we’re sitting decent.”

Not Surprising:  Forget sexy, Kyle Busch is the wild card and he knows it. And he also knows that Jeff Gordon is most likely the competitor that he will have to beat to keep that wild card standing.

The driver of the No. 18 Wrigley Doublemint Toyota finished 6th at Atlanta, gaining one position in the point standings to 12th, the second wild card position.

“Overall the night was good for us,” Busch said. “Had to pass a few cars and got by a few cars to finish sixth.”

“I’m not saying that I’m for sure going to be in the Chase at all – anything can happen,” Busch continued. “Jeff Gordon is no slouch at Richmond either and I feel like that’s the guy we’re racing.”

“We’ll just have to see how it all plays out.”