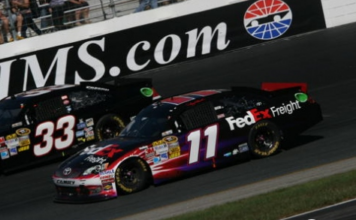 [/media-credit]From late-arriving pit crews to the second time around for the Cup Series at the mile track in Loudon, New Hampshire, here is what was surprising and not surprising from the second Chase race, the Sylvania 300.

Surprising:  While being in Victory Lane is always special, it was a surprisingly big moment for the winner of the Sylvania 300, his team and his team owner.

For Denny Hamlin, driver of the No. 11 FedEx Freight Toyota, it was truly a big moment as he delivered on his promise, via tweet, to win the race.

And it was a major accomplishment for his team, who after overcoming mistakes of the previous race and during their qualifying lap at New Hampshire, rallied around each other and their driver to score the victory.

But most of all, it was a huge moment for team owner Joe Gibbs, who achieved a milestone, his team’s 100th NASCAR Sprint Cup win, at the Magic Mile. The 100 wins were scored by Tony Stewart with 33, Denny Hamlin with 22, Bobby Labonte with 21, Kyle Busch with 20, Dale Jarrett with 2 and Joey Logano with 2 wins.

Joe Gibbs Racing is now only one of six teams in NASCAR history to achieve the 100 victory mark.

“It was a huge day for us,” Coach Gibbs said. “Bobby Labonte came into victory circle and I appreciated Bobby, Dale Jarrett, Jimmy Makar, everybody when we first started, Tony Stewart, so it took a lot of people down the road.”

“But, certainly, gosh, thinking back on my 21 years – just doesn’t seem like it was that long ago and you realize that we’ve got a hundred wins.”

“That was a huge deal for us.”

Not Surprising:  Runner up for the second week in a row, Jimmie Johnson, continues to not only rack up the points, but count each one most carefully, right to the points lead.

“We had a great race car, just not an amazing car like the No. 11 had,” Johnson said. “To only leave seven points on the table in two races is pretty good.”

“We missed the win last week and this week and we didn’t lead the most this weekend,” Johnson continued. “But it is probably seven points total.”

Surprising:  Brian Vickers did his own surprising Denny Hamlin impersonation, slicing and dicing his way from the back of the field after an engine change to a ninth place finish.

“Really proud of the guys – everyone at MWR, Toyota, just this 55 crew,” said the driver of the No. 55 Freightliner/Jet Edge Toyota. “All the guys did a great job.”

“We had a car good enough to go and race with them for a little while.”

Not Surprising:  In spite of still being 45 points behind the leader and in the 12th Chase position, this driver continues to keep the faith, just like every other four-time past champion should.

Jeff Gordon, in the No. 24 Drive to End Hunger Chevrolet, started on the pole and finished 3rd at New Hampshire Motor Speedway.

“It was a really solid effort,” Jeff Gordon said. “It’s a shame what happened to us in Chicago last weekend because I think we would have back-to-back top fives.”

“There is no doubt we can get ourselves back into this.”

“There at the end we chattered all four.”

“On a long run, we had about a 10th place car, which is probably a little bit better than we usually do here,” Kenseth, driver of the No. 17 Zest Ford Fusion, said. “But on short runs, we weren’t very good at all and then we got that caution there at the end and that didn’t work in our favor.”

“We weren’t that great overall.”

Not Surprising:   As has his season gone, so did the New Hampshire race play out. Kyle Busch had a great outside pole start go south with engine woes yet again.

And while his crew chief Dave Rogers attempted to put the best spin on it, Busch was less then complimentary behind the wheel of the No. 18 M&M’s Toyota.

“Unfortunately, we picked up a ‘miss’ under the hood,” Rogers said. “We just stayed out there and rode it out, and got the best finish possible.”

When told by his crew chief that he could not fix the car and to just ride it out, Busch said simply “Imagine that.”

Surprising:  The two Michael Waltrip Racing teammates in the Chase had diametrically opposite experiences at the Magic Mile this past weekend. Clint Bowyer, in the No. 15 5-Hour Energy Toyota, finished fourth but Martin Truex Jr., in the No. 56 NAPA Auto Parts Toyota, finished 17th.

“We had a solid race car,” Bowyer said. “But we needed a little bit more.”

“There’s a lot of racing left,” Bowyer continued. “It was a solid finish and kept us in the game going to Dover.”

Not Surprising:  While Stewart Haas Racing had a seemingly solid day, with Tony Stewart finishing seventh and teammate Ryan Newman finishing tenth, both were disappointed when the checkered flag flew.

“It might’ve been a solid result, but we need to be better than that,” Stewart said simply.

Surprising:  Kasey Kahne, driver of the No. 5 Farmer’s Insurance Chevrolet, had a surprisingly consistent run at the Magic Mile. He finished in the same place as his number, position five.

“We had another consistent day,” Kahne said. “We have been pretty consistent so far so the first two are good for the Chase.”

“Hopefully, we can keep it going and get a little faster if we want to catch those other guys,” Kahne continued. “That would be pretty cool.”

Not Surprising:  With a thirteen place finish and an issue with his pit stop, it was no surprise that the Dale Earnhardt, Jr. was in a state of dislike.

“I didn’t like the car in practice and didn’t really like it all weekend,” Junior said of his No. 88 AMP Energy/Diet Mountain Dew/National Guard Chevrolet. “We’ve got to get our stuff together to compete with these guys.”

Surprising:  Regan Smith, celebrating his 29th birthday and finishing 16th, got a real surprise. He found out that he was being replaced in his No. 78 Furniture Row/Farm American Chevrolet.

“You just have to keep plugging away,” Smith said. “You need to figure out a way to make the best of the situation.”

Not Surprising:  Brad Keselowski, scrappy as ever, could only talk about beating, banging, clawing and digging after his 6th place finish in the Blue Deuce.

“There was a lot of clawing in the race,” Keselowski said. “We’d have liked to have been a little faster but we still had a decent day.”

“Like my 2 crew does every week, they just keep digging and made something happen.”

When asked about his position in the point standings, now just one point behind Jimmie Johnson, Keselowski was direct and to the point.

“One point doesn’t seem too bad,” Keselowski said. “We’ll go to Dover and give ‘em hell.”