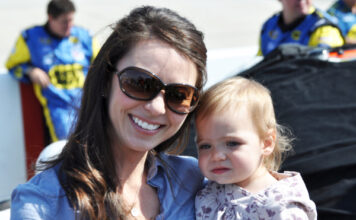 [/media-credit]Nicole Biffle is one busy young woman, as wife to Chase contender Greg and mom to 15 month old Emma. And while obviously completely committed to both of those roles, she is also passionate about her work with the Greg Biffle Foundation.

Nicole started the Greg Biffle Foundation with her husband in 2005 with the mission of creating awareness and serving as advocates to improve the well-being of animals by engaging the power and passion of the motor sports industry.

One of her ‘pet’ projects is the NASCAR Pets Calendar and she has just wrapped up work on the 2013 calendar, featuring many drivers including Kyle Busch, Jeff Burton, Ricky Stenhouse, Jr., and Joey Logano. It also features NASCAR media members Shannon Spake, Rutledge Wood, Jeff Hammond, John Roberts and Chris Myers.

“So we just finished our 2013 calendar and it’s really cool,” Biffle said. “This year we have Danica Patrick, the King and Kyle Petty, and media and drivers of course.”

“It’s fun because this year we have our daughter Emma in the calendar,” Biffle continued. “So, it’s completely different.”

“It’s funny because when it comes out after taking the picture so long ago, she looks so different since then.”

The NASCAR Pets Calendar has been the fundraising hallmark for the Greg Biffle Foundation. The response to the inaugural edition of the calendar made it the best selling item on NASCAR.com and in 2009, Greg’s sponsor 3M got on board to take it to the next level.

The 2013 edition of the calendar is already on sale in various outlets, including 30 Petco stores, Mooresville, NC vet clinics, animal welfare organizations nationally and again on NASCAR.com.

According to Nicole Biffle, the Foundation took another bold step to raise money recently by auctioning off a 2012 Ford Raptor truck designed by her husband. The truck sold for $80,000, with all of the proceeds benefitting the Foundation.

“With that Barrett Jackson auction we just did, we also raised money as well,” Nicole Biffle said. “The truck was really cool.”

“I was watching it on TV and I was so nervous,” Biffle continued. “I’m very thankful to the lady who bought it. That was very nice of her and that will help a lot of animals.”

“The great thing is that the dog they had there in that rescue, there were a lot of inquires about adopting him,” Biffle said. “So, having him there brought some attention to not only him but his shelter too.”

Nicole Biffle is also passionate about another upcoming event to benefit the Foundation, their annual mountain retreat fundraiser.

“We have our Foundation event, our mountain retreat event, after the Charlotte race,” Biffle said. “We do that at our mountain property.”

“It’s an exclusive event and we invite about nine drivers and we make of teams,” Biffle said. “We invite them and they go on the dirt track and shoot skeet.”

“We have an archery course set up and we do trail rides,” Biffle continued. “It’s really a lot of fun.”

“We raise money through sponsorships and the participants pay to attend,” Biffle said. “It is a competition so the drivers are always competitive, especially on the dirt track, but we also give awards for the best shooter and things like that.”

“We also added the night before a poker tournament and a casino night just for fun,” Biffle continued. “Of course, people are generous enough to donate their winnings back to us which is so nice.”

“We go through them and it is so difficult because there is so many,” Biffle said. “We look at what we’ve got and we tend to give to those that have little so they can keep their doors open.”

“I had to hire an assistant to help me with the grant requests because my brain wasn’t working with what my heart was saying and I would have given to everybody,” Biffle continued. “It’s just hard but that’s obviously what the Foundation is for.”

Nicole Biffle is also passionate about another endeavor, serving on the Board of the Friends of the Animals organization, where she serves as President and Greg as Vice President.

“Greg and I are involved with the Friends of the Animals,” Biffle said. “That’s to build an adoption center in Mooresville.”

“That is really, really going well,” Biffle continued. “We are making progress and the community backing is astounding.”

“I’m pretty excited,” Biffle continued. “I think it’s going to be a big thing for us.”

As with every mom, however, Nicole Biffle’s passion must now be shared and spread around, from her Foundation work to her roles as wife and mother. And like every busy mom, she works hard at trying to balance it all.

“It’s different now that I’ve got Emma because I can’t focus as much time as I did in the past,” Biffle said. “I love being with her.”

“We just try to balance it out and I’m grateful for good help at the Foundation and good board members at the Friends of the Animals.”

Oh and by the way and on one final note, Nicole Biffle is also passionate about her husband Greg, who is currently competing for NASCAR’s highest honor the Sprint Cup. And she is very passionate in supporting him, along with Emma, in that endeavor.

“I would love for Greg to win the championship this year,” Nicole Biffle said.”Being the first to win in all three series would be amazing.”

“It would be awesome to have our little family to celebrate that.”

For more information about the Greg Biffle Foundation or to purchase a 2013 calendar, visit gregbifflefoundation.com.