Championship Chase: Down to Three? 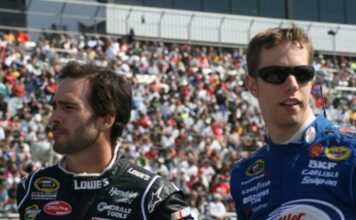 [/media-credit]Maybe it’s just me, but I can’t see much difference in the Chase format than the regular season. It looks like the season will come down to Brad Keselowski, Jimmie Johnson, and Denny Hamlin. Consider this. Keselowski leads Johnson by five points. Hamlin is 16 points behind, which mean he has to hope that those two have to finish 20 places below him to have a chance. That’s only about three places per race, but if anyone believes that Johnson is going to be that bad when the final races are good tracks for him…well, I’ve got ocean front property in West Virginia to sell you. It gets worse.

It’s not much different from the old system. Yes, maybe we had a champion crowned early, like Kenseth in 2003 (which probably was the reason for the Chase), but does it make any difference? Yes, you can point to last year, when Tony Stewart made a miraculous charge to win, but I contend that this will be rare and unusual. In most years, like so many years, it will be the same old faces doing the same things and winning the championship. I feel like its window dressing, but let me be the last one to say that (sorry, I already did). The gimmick worked for a year, but what about this year?

So much bandwidth and so many hours on television and radio hours have been wasted debating the chances of Jeff Gordon (48 points behind) and Dale Earnhardt Jr. (39 points behind). Neither have a reasonable chance unless they break out of their norms and get hot. That’s not likely as it is the N BA, MLB, and the NFL. That’s the fault of the system. Stick and ball games are based on emotion and athletic ability, but in NASCAR, it has a lot more to do with resources and momentum. It’s a classic study of the haves and have-nots. Certainly the Earnhardt and Gordon teams have the resources and talent, but the momentum is the problem. Gordon has that momentum, but being so far behind, he has depend on the failure of others. It’s the same with Earnhardt.

Things could change, especially after Talladega, which is the wild card, but for now, it looks like it’s Keselowsksi, Johnson, and Hamlin, with a strong nod to Johnson. We’ll see if that’s the case after a couple more races. But if anyone thinks that anyone after fifth place has a chance, well, you have to go against history. And that isn’t wise. With history on our side, and considering last year being an aberration, we already know that’s a 33% chance, we know who the championship will be. In the meantime, does anyone care that Brad Keselowski won the race at Dover? That’s the Chase. All those things that could be and never look that at the obvious. All to ignore the obvious. At least for now.

Ron Fleshmanhttp://www.ris-news.com
Ron Fleshman has followed NASCAR racing since attending his first race at Martinsville Speedway in 1964. He joined the Motor Sports Forum on the CompuServe network in the 1980s and became a reporter for Racing Information Systems in 1994. In 2002, he was named NASCAR Editor for RIS when it appeared on the World Wide Web as www.motorsportsforum.com. He can now be found at www.ris-news.com. Ron is a member of the American Auto Racing Writers and Broadcasters Association. You can find Ron following and reporting on the top three NASCAR divisions each week. As a lifer in his support of racing, he attends and reports on nearly 30 events a year and as a member of the motor sports media, his passion has been racing for 47 years. He lives with his family in rural West Virginia and works in the insurance industry when not on the road to another track.
Previous article
The best weekend of my life at Dover
Next article
Nicole Biffle Shares Passion for Work of Greg Biffle Foundation