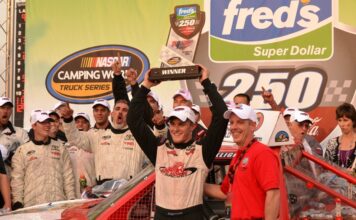 “As you know, it’s been a long road to get to this victory. Two different teams and a lot of adversity, but today I was put with some of the best people I’ve ever worked with and some of the best people I’ve ever raced with. And, it starts at the top with Tom DeLoach (team owner) and this whole Red Horse Racing team. My crew chief Chad Kendrick right here and this entire team that we assembled mid-season to go after this championship when my situation changed.” Kligerman said.

It wasn’t easy for Kligerman.  He battled through a bad pit stop, vibration and battery issues.

“I can’t thank enough people for this win. There’s a ton of people that have made this possible to get to this point in my career. I can’t say enough about these guys. We fought every single possible thing you could fight. We had a vibration, we had a battery go down and had no alternator and we just went for it there at the end. Thank you to Johnny Sauter because he made that possible. That was pretty awesome. I can’t say enough about these guys. We’re going to go and fight for this championship for sure.” Kligerman said.

This was the same truck that John King won with at Daytona International Speedway earlier this season. This was only Parker’s seventh start with Red Horse, but has been a threat to win each time out. Today also gave him his fifth top five in those seven starts.

Kligerman started ninth and led once for two laps, the final two, the fewest led by a winner at Talladega.

After being released from the No.29 team earlier this year, Parker says he “…wasn’t sure if he would even still be in NASCAR” All of those worries are now over! He has made himself a solid championship contender in the NCWTS.

Point leaders Ty Dillon and James Buescher seemed to be near each other all day and they finished the day with Buescher finishing third and Dillon finishing fourth, the points however remain the same showing Dillon with a one point advantage.

Roger Holtsclawhttp://www.nationalmotorsportsnetwork.com
Roger has over 24 years experience as a mechanic and crew member in NASCAR at many levels including Cup, Nationwide and Truck Series. He has also competed as a driver at many short tracks around the Southeast including one start the USAR Hooter's Pro Cup Series. Roger is now embarking on a motorsports journalism and photography career and is co-owner of HMP Photo. Follow me on Twitter @rogerholtsclaw Email me: roger@speedwaymedia.com
Previous articleBayne and Warriors in Pink Ford Fusion to Start From The Fourth Row at Talladega
Next articleSRT Motorsports – RAM NASCAR Camping World Truck Series Race Final Quotes – Talladega