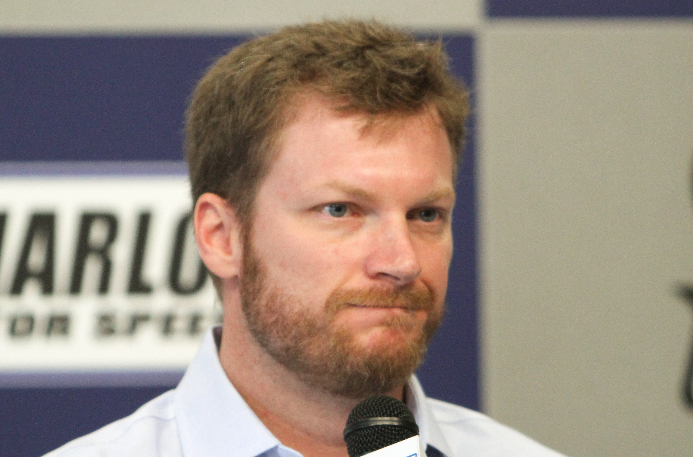 [/media-credit]Dale Earnhardt Jr. will not be racing in this weeks NASCAR Sprint Cup Series race at Charlotte Motor Speedway and the following week’s race at Kansas Speedway.

Earnhardt Jr. suffered and concussion after an accident during testing at Kansas.

“I guess I will just start out with ah, were this all kind of began.  We had a test at Kansas. About 5 weeks ago and we blew a right front tire.  Going into turn 1, I remember everything about that accident and everything after that accident, but I knew that I didn’t feel….. you know you know your body and you know how your mind works and I knew I something was just not quite right.  But I decided to just try to push through and work through it.  I’d had concussions before and knew exactly kind of what I was dealing with.”

Despite knowing he was hurt, Earnhardt Jr. felt it was okay to continue on and was feeling much better by Talladega last week.

“I felt pretty good after a week or two and definitely 80, 90 percent by the time the Chase started, and by the time we got to Talladega I felt 100 percent, felt really good.”

On the final lap of Sunday’s race at Talladega, Earnhardt Jr. was involved in the “big one”.

“In the accident at the end of the race I was hit in the left rear quarterpanel.  Sort of an odd kind of a collusion where the car the car spun around really quick and sort of disoriented me and I knew that I sort of regressed.” Earnhardt Jr. said.  “I knew as soon as it happened that I had re-injured myself.”

“I knew as soon as it happened that I had re-injured myself.  It was not even half of the impact that I had a Kansas, but it was enough to cause me some concern.”

“So I went a couple of days wondering how my body would react and sort of waiting for it to process what was happening.  About Wednesday I was still having some headaches.  That was really the only symptoms I was having.”

“So I took it upon myself.  I contacted my sister.  We talked about seeing a neurosurgeon and we ended getting steered towards seeing Dr. Petty.  Meet with him….ran through a couple of tests, everything was checking out.  Did a MRI, everything looked good there.”

“But I was really honest with him about how I felt and whole process from Kansas all the way on.  He (Dr. Petty) spent the night thinking about what we discussed and everything we did.  He couldn’t clear me to race this weekend.  I trust his opinion, that’s why I went to see him.  He has been a good fried of mine for a long time.”

“I believe when he tells me that I do not need to be in the car.  That I need to take a couple of weeks off….. that’s what I need to do.”

“the one symptom that is more important than all the tests is headache, and as long as there’s any headache, the brain is not healed, and until that’s healed and had some time to rest and then you provoke it again and can’t make it happen again, then that’s ‑‑ then you feel like you’re on the road to recovery.” Dr. Petty said.

Earnhardt Jr. did not see anyone after the Kansas accident.

“No I didn’t see anybody at Kansas.  I regret not seeing somebody after that happened.  I was stubborn.  I have had concussions before and thought I knew what I was dealing with….I felt like I was capable of doing my job.”

Heading into Atlanta, Earnhardt Jr. talked to his crew chief Steve Letarte about how he was feeling.

“I called Steve (crew chief).  We talked about how I was feeling and I told him that I really felt pretty good but I really wouldn’t know I would be able to compete until I got into the car.”

“I was honest with Steve. I told Steve when we get to Atlanta and I don’t feel good, I am gonna be honest with you and tell you that we need to have something in…..as a backup plan for me to get out of the car.  I wasn’t going to drive the car if I felt like I was gonna deal my crew chief and my team a short hand that weekend.”

It was not as hard of as hit at Talladega as it was at Kansas, and the was what concerned Earnhardt Jr. the most.

“I think we got the data, but it was around 40 G’s, and the shot at Talladega was only around 20 G’s. It wasn’t really that big of a wreck, and the fact that I felt the way I did was what concerned me after the accident at Talladega because it wasn’t that hard of a hit.”

When asked his he thought the cars were safe enough, he said he has no worries about that.

“Oh, the cars are fine. There’s just some things that you can’t control. I don’t know that you can have a race car that’s completely 100 percent safe. But there’s been so much ‑‑ so many advances in the last 10 or 12 years that have made this sport incredibly safe. So I have no worries about that.”

Earnhardt Jr. does not blame Talladega at all for the concussion.

Earnhardt Jr. does not have any plans on being at the race this weekend at Charlotte.

“I don’t have any plans of being here this weekend. I think that I’d be more of a distraction to the team and their efforts in the race. I think they’ve got a good opportunity to have a good run this weekend, and I feel like that, to minimize the distraction would help them out.”