A Superstar’s Daughter Brings Home the Seriousness of Head Injury 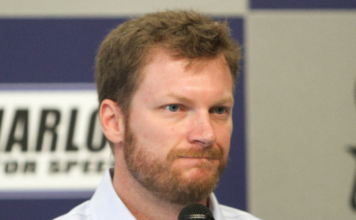 [/media-credit]Many read my last article where I congratulated Dale Earnhardt, Jr. on deciding to step away after his two recent concussions. Little did I know that there was another person in the same corner on this issue. Just a day after I wrote the story, I saw what I call “the letter.” It was a letter to Earnhardt from Amanda Gardstrom. Gardstrom is the daughter of NASCAR legend Fred Lorenzen. In the letter, she also commends Earnhardt. She knows all too well what can happen when proper medical care isn’t given after a concussion. You see, Fred Lorenzen now resides at a nursing home, and dementia rules his day.

The first race I ever attended was a 1964 race at Martinsville Speedway. Fred Lorenzen won that day. I also was in the stands in 1972 when he ran his last race at the same speedway. It’s no surprise to readers of this page that I have long advocated Lorenzen’s inclusion in the NASCAR Hall of Fame. He never ran for a championship because in those days it really didn’t matter. Each race was a championship and to many teams, running the entire schedule was a little much, so teams like Holman Moody, the Wood Brothers, and others ran only selected races. It’s interesting that drivers of those cars, David Pearson, Cale Yarborough, and even Bobby Allison, had such a terrific winning percentage while in those cars. Lorenzen won 26 races from 1961-1967 in only 111 tries, roughly a win every four races. He was the first driver to win $100,000 in a year and the first to win at all the major tracks (back in those days, that meant wins at Daytona, Darlington, Charlotte, Atlanta, and Rockingham). He was one of the best.

What brings all this back home is that Lorenzen’s daughter is now making the fans and officials of NASCAR aware of just how serious this problem is. If you search the internet, you can find that Gardstrom has been talking about this since 2008. She has been pretty much ignored during this time and only Earnhardt, the most popular diver on the circuit could bring her message to light. Once again, you just have to applaud Junior for his actions and give a tip of the hat to Gardstrom for putting the dangers in perspective.

Though we’ll never know until Lorenzen passes and a brain autopsy is preformed, whether the crashes he had at Daytona and Darlington caused his dementia, but the symptoms seem to indicate that this is the reason. Just maybe Gardstrom and Earnhardt have done enough to raise awareness in NASCAR, just like other events have raised awareness in the NFL and other sports about head injuries. Championships and points are very important to drivers, teams, sponsors, and fans, but if it endangers the quality of life for competitors, is it really worth it all? Hopefully some lessons have been learned. I certainly hope so.

Ron Fleshmanhttp://www.ris-news.com
Ron Fleshman has followed NASCAR racing since attending his first race at Martinsville Speedway in 1964. He joined the Motor Sports Forum on the CompuServe network in the 1980s and became a reporter for Racing Information Systems in 1994. In 2002, he was named NASCAR Editor for RIS when it appeared on the World Wide Web as www.motorsportsforum.com. He can now be found at www.ris-news.com. Ron is a member of the American Auto Racing Writers and Broadcasters Association. You can find Ron following and reporting on the top three NASCAR divisions each week. As a lifer in his support of racing, he attends and reports on nearly 30 events a year and as a member of the motor sports media, his passion has been racing for 47 years. He lives with his family in rural West Virginia and works in the insurance industry when not on the road to another track.
Previous article
ARCA LAP BY LAP: Alex Bowman wins Kansas Lottery 98.9; Chris Buescher wins the Championship
Next article
Alex Bowman wins Kansas Lottery 98.9 in thrilling late race pass; Chris Buescher wins championship