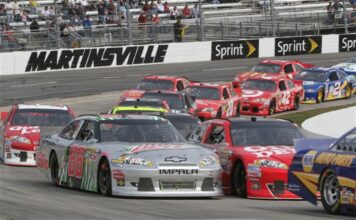 [/media-credit]How could there not be some form of mayhem at the Martinsville Speedway last Sunday? The fact that the green flag fell on 43 cars lined up on a half mile track, shaped like a paper clip, alone said strap in and hang on tight. When the checkers fell on lap 500, it was fairly evident why a five time champion was looking like a six pack. His season long rival for the championship scored an impressive comeback run to at least keep the standings close. Unfortunately,their season long rival watched his title hopes evaporate with the failure of a petty cash car part. When the Tums Fast Relief 500 was concluded, one driver opened a bottle of champagne while many other opened a bottle of Tums. With those thoughts in mind, let’s begin with:

HOORAH. Jimmie Johnson, and his #48 Hendrick Motorsports team, once again showed us why they’re championship contenders with their eye on that coveted sixth title. Johnson led a race high 193 laps of the Tums Fast Relief 500 and scored his fourth win of the season and a record tying 7th win at Martinsville. He started the weekend second in the championship standings, seven points behind leader Brad Keselowski. He finished the weekend emerging as the new points leader with a two point advantage over his championship rival.

WAZZUP. On Lap 440, Race leader Jimmie Johnson was attempting to pass Juan Pablo Montoya in an effort to lap him. At the time Johnson’s team mate, Jeff Gordon, was in second and charging hard in an effort to claim the race lead. When Johnson realized that passing Montoya was taking too long, he tapped his rear bumper two times. Montoya’s car spun around and came perilously close to hitting Johnson. It’s very rare that you see Johnson lose his patience during any Sprint Cup race and he was lucky that he was able to drive by the spinning Montoya without getting collected into the wreck. Getting involved in that wreck would have been devastating to Johnson’s title run and could have even handed the championship to Keselowski on a silver platter.

WAZZUP. Brad Keselowski’s qualifying run at Martinsville netted him a 32nd starting berth. Qualifying has been a gray area for this team as of late and it’s a situation that needs to be addressed and rectified very quickly with only three races left in the Chase.

HOORAH. Through some determined driving, Keselowski worked his way to the top ten and was on his way to becoming a major player in the outcome of the race.

WAZZUP. With 25 laps left in the race, a blown engine brought out the caution flag and it was major decision time for the teams regarding pit stops and tire needs. At this point in the race there were 18 cars on the lead lap. Keselowski asked his crew chief, Paul Wolfe, if he would mind if he made the final decison regarding a pit stop. After getting the green light, Keselowski’s call was to stay on the track. He anticipated that the five cars in front of him would come to pit road for at least two tires, while the majority of the cars behind would elect to stay out to gain track position. It was a hero or zero call that didn’t quite work out. 16 cars, of the 18 on the lead lap, came down pit road for tires. Keselowski and Dale Earnhardt Jr, who also didn’t pit, lined up on the front row for the restart with well worn tires, Neither one of them remained there very long.

HOORAH. Again, through determined driving, Keselowski managed to finish sixth and place himself within two points of Johnson. Expect the title run between this pair of drivers, with only three races left in the Chase, to get very exciting.

WAZZUP. Denny Hamlin lives just a few miles down the freeway from the Martinsville facility. That sense of home track advantage, along with four previous wins at the paper clip, got him listed as the pre race favorite to win by nearly everyone you could name. He was also regarded as a major player in the Chase profile. He began the day third in the standings and only 20 points from the top. He finished the day fifth in the standings, 49 points out of first, and will now have to wait to next year to make that coveted run at the NASCAR title he so desperately wants to win.

WAZZUP. Denny Hamlin found himself having to deal with a triple layer of Martinsville Mayhem. The first two incidents involved an unbelievable two consecutive penalties for speeding on pit road which killed his track position. However, this young driver impressed us all by getting up on the steering wheel and racing his back to the front of the field. That effort completely unraveled on lap 392. While racing in third place, Hamlin’s Toyota suddenly lost power and came to a complete stop on the track. After retreating to the garage area, the problem was determined to be a faulty master switch which is used to distribute power to the cars massive electrical harness system. The final result was a devastating 33d place finish. The retail cost of this master switch was later reported to be around $30. The cost of being eliminated as a championship contender is going to be $5 million plus.

WAZZUP. Hamlin found himself charging from the back of the field during this truck race. He, along with two other drivers, were sent to the rear of the starting grid after, of all things, missing the mandatory driver’s meeting. In this day and age, when NASCAR national touring teams employs the use of large entourages, you would think that at least one person would have looked at their watch and yelled “Denny, driver’s meeting NOW.”

HOORAH. After sitting out two races to recuperate from the effects of dual concussions, Dale Earnhardt Jr returned to the driver’s seat of his #88 Hendrick Motorsports Chevrolet much to the relief of his massive fan club known as the Junior Nation.

WAZZUP. With ten laps remaining in the race, Earnhardt found himself parked against the wall following a crash not of his making. Sam Hornish Jr clipped Carl Edwards who in turn clipped Earnhardt. Prior to the incident, Earnhardt was running a strong race and was frequently in the top five. After the race he said it felt good to be back in the car and then said “I was just pissed off about how we finished that race. That was really ridiculous.”

HOORAH. Aric Almirola brought his Richard Petty Motorsports Ford to a fourth place finish. This young driver has landed himself on the radar of many NASCAR observers largely because of his presence on practice and qualifying charts. The top five finish at Martinsville couldn’t come at a better time for Almirola. His contract with RPM is up this year and now reports say he’s “THIS” close to signing a new deal with King Richard Petty.

HOORAH. Brian Vickers scored his latest top ten finish at Martinsville after concluding his part time schedule with Michael Waltrip Racing. This driver’s future is looking very bright for 2013. It’s already been announced that he will return next year and share the driving duties of MWR’s #55 Toyota with Mark Martin and Michael Waltrip. There also a lot of talk that says Vickers will be running for the NASCAR Nationwide Series championship next year for Joe Gibbs Racing.

HOORAH. Veteran driver Bobby Labonte finished ninth in the final Martinsville standings in his JTG Daughtery Racing Toyota. This was huge for this team who sorely needed a performance like this.

HOORAH. The final accolade goes to the Texas Motor Speedway for those clever television spots promoting their upcoming NASCAR weekend. The short and sweet, 15 second, commercials, using the theme no limit, wild asphalt circus, were very humorous. This is yet another example of how speedway President Eddie Gossage, and his marketing staff, are always willing to think and work outside of the box.