Keselowski Is For Real 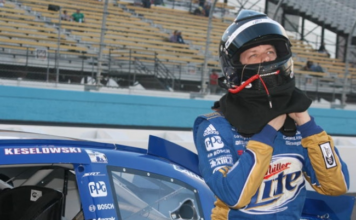 [/media-credit]A couple of years ago, I had to wonder what Roger Penske was thinking. I mean, giving Brad Keselowski a ride in a great car? What was he thinking? Here was the guy who hit everything but the pace car in the Nationwide Series, won a race at Talladega by punting Carl Edwards into the stands, and cussed like a sailor. The Captain had to be crazy. Crazy like a fox.

So here we are and Keselowski is in the driver’s seat. A 20-point lead translates to a 100 point lead under the old system (you know, the one Bob Latford created and served us well forever), and though it’s not certain, a 15th place finish on Sunday will make him the Sprint Cup champion for 2012. No drama this year, or so it seems. But as Lee Corso might say maybe this is a little too fast.

Last year, Carl Edwards came into Homestead with a slim lead only to have Tony Stewart win the race against all odds to snatch the championship from Edwards against all odds. That’s why I’m not declaring this championship this week. Ask Jimmie Johnson about a tire failure. Ask the late Davey Allison about a commanding point lead (if we could and how much do we wish we could). As Yogi Berra said, it’s not over until it’s over. And it isn’t over for the next our days, but the proverbial fat lady is singing. Who would have thunk it?

These days, Keselowski is still as brash, and from all indications, still cusses like a sailor, but he also is one heckuva driver. He’s proven it this season by winning races and, with his crew chief, has proven that he is willing to gamble for the final goal. He has shown maturity that no one could ever imagine. Also, remember this is a team in the midst of transition from Dodge to Ford. No matter what anyone says, that has to be a distraction, and still here he is on the verge of a championship. It would be bittersweet for SRT, Dodge’s racing arm, and the engine program at Penske, which will go away at season’s end. It’s quite of an accomplishment no matter what happens on Sunday in south Florida, but it’s not enough.

Many think Johnson can somehow pull this one out. Today, my Twitter field was bombarded with over 1,200 tweets from Johnson and Keselowski fans, most of them from Johnson fans (and I still don’t understand why subscribing to Johnson’s and Keselowski’s feeds has me getting anyone’s tweets about the two drivers on my feed). NASCAR should be proud of this despite the fines of Monday. As some wise man said, there is no such thing as bad publicity. My feeling is the fine was more about Brad’s language in the media center than his tweeting under a red flag, but no matter, It is what it is. Under the dictatorship that NASCAR, you are fee to pick and choose rules as you please, and they do it frequently. It’s just the way it is.

I tend to think Keselowski will win the Cup. Why? Simply because he is in the lead and drives for a great team that will not let him fail. Of course I’ve said this before, and like this last year, the impossible happened, so you never know. But, I know this for sure. The kid see a championship within his grasp again and many times after that. Jimmie Johnson had better reach up and get those belts tight (as Larry McReynolds would say). He has competition.

Ron Fleshmanhttp://www.ris-news.com
Ron Fleshman has followed NASCAR racing since attending his first race at Martinsville Speedway in 1964. He joined the Motor Sports Forum on the CompuServe network in the 1980s and became a reporter for Racing Information Systems in 1994. In 2002, he was named NASCAR Editor for RIS when it appeared on the World Wide Web as www.motorsportsforum.com. He can now be found at www.ris-news.com. Ron is a member of the American Auto Racing Writers and Broadcasters Association. You can find Ron following and reporting on the top three NASCAR divisions each week. As a lifer in his support of racing, he attends and reports on nearly 30 events a year and as a member of the motor sports media, his passion has been racing for 47 years. He lives with his family in rural West Virginia and works in the insurance industry when not on the road to another track.
Previous articleMERCURY & WALKER’S MARINE GO FOR RIDE WITH EDDIE SHARP RACING IN NCWTS FINALE
Next articleWill safe be sorry? Stenhouse and Keselowski control destinies heading to Homestead