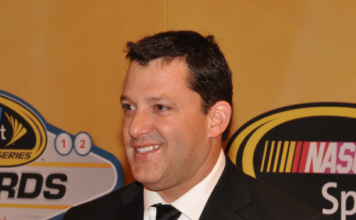 With the 2012 champion Brad Keselowski officially crowned, it was time for Tony Stewart to close the door on being the past champion, give new the new champ a little advice, and move on to the exciting events of the 2013 season.

“I feel good,” Stewart said in the media room after making his ninth place remarks at the banquet in Vegas. “I’m not used to being done by now.”

“I get to go back and enjoy everybody’s speeches and not be nervous about giving my own.”

Of the new champion to whom he has now passed the baton, Stewart has just one word. He finds Keselowski simply “refreshing.”

“It’s nice to see somebody that speaks from the heart,” Stewart said. “That’s the way all of us should.”

When asked if he and past five-time champion Jimmie Johnson had been indoctrinating the new champion Keselowski into his new role, Stewart noted that “Brad has had a busy enough week.”

“It is a long week for a champion,” Stewart said knowingly. “You wouldn’t trade it for anything obviously but by Thursday night you’re starting to get worn out.”

“And you can see it in Brad’s eyes that he’s getting tired.”

“The one thing that Jimmie and I sat down and told him was to enjoy every minute of it,” Stewart continued. “It seems like when you look at the schedule in the morning you think, “Oh my God, they’re wearing me out,” but every moment you have to enjoy and have fun with it because there are 40 plus drivers that want to be where you are this week.”

Stewart also had a few words of advice for the media when it came to their treatment of the new champion Keselowski.

“To be perfectly honest, I hope you (the media) continue to treat Brad the way that you are now,” Stewart said. “That gives him the opportunity to be himself and that’s what the fans want to hear.”

“I’m so scared that at some point somebody is going to turn on him,” Stewart continued. “And then it goes downhill from there.”

“So, I hope you guys in the media keep doing what you’re doing,” Stewart said. “I’m proud that you are giving him the chance to be open and I think it’s great for our sport.”

“The sponsors and the fans really enjoy that,” Stewart continued. “I think there’s always a lot more positive stuff than negative each week but sometimes that gets overshadowed.”

“I hope Brad is able to keep doing what he’s doing.”

Although the NASCAR season has officially come to an end with the banquet, Stewart said he has just a little bit more racing to do before closing out 2012.

“I’ve actually still got three races before the end of this year is over,” Stewart said. “I’m going to be almost at 95 races.”

“I’m excited about that,” Stewart continued. “That’s still what I love to do.”

While in Vegas to celebrate the new champion, Stewart took a little time out to raise money for charity, at both Keselowski’s and Jimmie Johnson’s PR rep’s expense. During the After the Lap celebration at Planet Hollywood, both Stewart and Johnson pledged donations in order to see champ Keselowski and Kristine Curley share a dance together on stage.

“Yes, it’s been a fun week and we always have a lot of fun with our PR reps obviously,” Smoke continued. “It was a fun moment.”

Stewart also took the opportunity to reflect on many of the past season’s accomplishments, from those of his competitors to his own team and drivers.

“There were a lot of those individual examples this year that were noteworthy and made for a good year.”

“I think winning Las Vegas was great for Stewart-Haas Racing,” Smoke said. “To win at a track we hadn’t won at before was special for me personally.”

“To get Ryan another win and see Danica progress and gain confidence towards the end of the season was great too.”

Stewart admitted that as much as he has enjoyed his reign as 2011 champion and the past year, he is most certainly looking forward to the new season ahead. One of the biggest challenges will be adjusting to the new car, which was just unveiled earlier in the week by Chevrolet.

“It can be big,” Stewart said of the new 2013 Chevrolet  SS. “Anytime you start with anything completely new, it’s an unknown variable.”

“So, it’s something that’s going to take a lot to figure out.”

“Nobody knows who is going to find the right combination with this new car,” Stewart continued. “So, until we get a couple races, we won’t know.”

“Even with that, a lot will change during the season.”

“You have to establish a base first,” Stewart said. “The hardest thing is getting cars built right now.”

“We’re sitting there with a race shop full of bare chassis that don’t have sheet metal on them yet,” Smoke continued. “And here we are at the beginning of December, so we have a lot of work to do in a short amount of time.”

While he may be stressing about the 2013 season and building new race cars, Stewart has been most excited about other promises that the next year will hold. One area of excitement is that several sponsors have extended their commitments to his team and the other is that the Truck Series will be racing on dirt at his beloved Eldora track.

Stewart-Haas Racing recently announced that four sponsors will return in the New Year for Ryan Newman and his SHR No. 39 team.

“Obviously, we’re very proud to have WIX Filters, Outback Steakhouse, Aspen Dental and Code 3 Associates back with our race team,” Stewart said. “We work really hard to deliver on the racetrack, but we work just as hard to understand each one of our sponsor’s businesses so we can help them accomplish the goals they have, be it in racing or with their customers.”

“It’s great seeing these partnerships grow and we look forward to another year of success with each of them.” And finally, Stewart will most look forward to serving as host as the NASCAR Truck Series, which will make its dirt debut at Eldora Speedway in Rossburg, Ohio. The half mile track, owned by Stewart, will be the host to the first of two Wednesday night races, with the Eldora race being held the Wednesday before the Indy weekend.

“It’s just really a dream come true for us not only as a promoter but to imagine that 42 years later we’re going to be taking a national NASCAR series back to a dirt track at Eldora Speedway is a huge honor for us,” Stewart said.

So, what will Stewart miss most as he closes the 2012 season and opens the door to the 2013 season? Well, one thing is certain and that is that he will not miss the close encounters of the media kind, with the exception of the off microphone conversations at least.

“Oh God no,” Stewart replied when asked if he would miss the media, many with whom he has had a somewhat mercurial relationship.

“But as much as I like to battle with you all season, there are a lot of times when we don’t have microphones and we all talk about different things other than racing,” Stewart said.