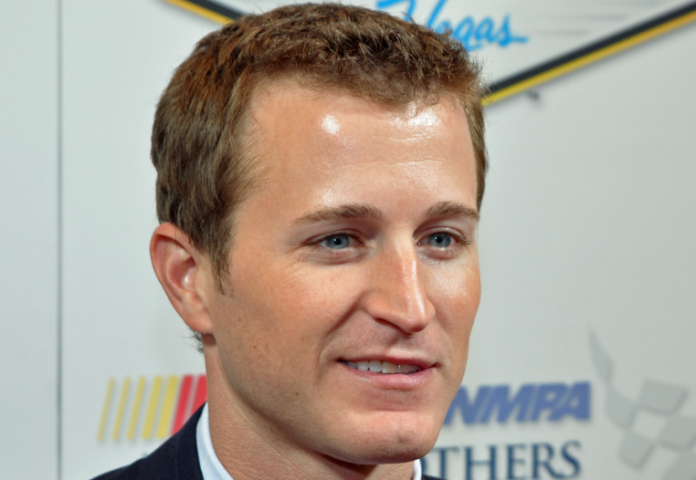 [/media-credit]As Kasey Kahne completed his first full season with Hendrick Motorsports, finishing fourth in the Chase standings, the 32 year old driver had just one thing on his mind.

“I want to win more,” Kahne said simply after giving his speech at the NASCAR championship banquet in Las Vegas.

This was Kahne’s third time qualifying for the Chase, doing so after a two year hiatus. Although rough at first, Kahne rallied later in the 2012 season to finish with two wins, one at Charlotte and the other in the other at Loudon, and four poles.

“It’s been great to be back in Vegas this year,” Kahne said. “I took two years off so it felt really good to be back from where we started the season.”

“The way we put it together as a team and made the Chase was awesome,” Kahne continued. “It would have been terrible to miss the Chase and have the other three in it.”

Kahne has enjoyed every minute of his time with Hendrick Motorsports this year. He especially treasured the 200th win for HMS, as well as his own win shortly after at the Coke 600, which was team Hendrick’s 201st.

“Being part of the 200th win was awesome and Jimmie (Johnson) deserved to win that one,” Kahne said. “Then 201 a few weeks later felt really good and made me feel a part of HMS now that we have a win.”

By his own admission, a big part of Kahne’s success has come about thanks to his partnership with long-time crew chief Kenny Francis, who has followed the driver through various team moves over the years. Kahne paid tribute to Francis in his banquet speech and in his remarks afterwards.

“We’ve been a lot of places and ended up at HMS,” Kahne said to Francis. “Thanks for sticking with me.”

Kahne also paid tribute to the skills that Francis has brought to Hendrick Motorsports, particularly his expertise at the mile and a half tracks. But he and his team have also benefitted immensely from the HMS approach and integration of all four race teams.

“I think Kenny (Francis) brought some things front-end wise that all the teams ran and really liked throughout the season,” Kahne said. “That was a big gain.”

“Everything that HMS, from the drivers to crew chiefs to those building the cars, added so much to what myself and Kenny had in the past,” Kahne continued. “It’s been great to be a part of all that and be given so many great tools.”

One of Kahne’s biggest pleasures this past year has been participating, twice, in the HMS time-honored tradition of ringing the bell back at the shop after a race win.

“It was great,” Kahne said. “There were a lot of people that I didn’t even know existed.”

“We went into some shops that I hadn’t been to before,” Kahne continued. “Every employee gets excited when we ring the bell.”

“Everyone gets a shirt or sticker,” Kahne said. “It’s nice to be a part of that.”

“I’m proud to be a part of the company where everyone is working towards the same goal, getting all four teams the chance to win.”

As with most of the top-ten drivers, Kahne admitted that making his fourth-place finishing speech at the banquet was one of his least favorite things to do. In fact, he admitted that he would much rather be working out and maintaining his intense fitness regime than speaking in front of his racing peers.

“It’s definitely not what I enjoy doing,” Kahne said after making his speech.” I’d much rather be involved in working out, training.”

“That doesn’t make me near as nervous as talking to those people at the banquet,” Kahne continued. “I feel good about myself when we train.”

Kahne did, however, enjoy his time in Vegas, especially getting to know the new champion, hanging out with some of some of his fellow competitors, and celebrating with the fans.

“I don’t know Brad (Keselowski) real well, but I’ve talked to him a little bit all year long,” Kahne said. “He’s a good guy and I like what he’s done.”

“I’m impressed with how he has driven the car and how he’s involved in a lot of things,” Kahne continued. “I have a lot of respect for the guy.”

“I have a lot of favorite moments from Vegas,” Kahne said. “I think driving the cars on the Strip was a high point.”

“There were a lot of fans watching and so that was exciting,” Kahne continued. “Enjoying it with these guys and getting to spend time with them has also been great.”

“At the track, we don’t get a lot of time together so away from the track, we’ve all had some fun,” Kahne said. “I’ve had a blast with (Kevin) Harvick and (Clint) Bowyer.”

But most of all, Kahne is looking forward to putting all of the bad luck from the beginning of the 2012 season far behind him and capitalizing on the latter part of the season as he looks to 2013.

“There were a few of those bad luck moments this past season,” Kahne said. “We had speed and would run upfront but then something would happen.”

“As soon as the luck changed, we put together a pretty decent season,” Kahne continued. “It was a good season and we came from a ways back.”

“To build on that next year at a stable organization will be great.”