Clint Bowyer ‘Happy to be Second’ 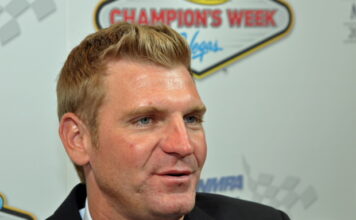 [/media-credit]While it may have been Clint Bowyer’s first season ever with Michael Waltrip Racing, it was the best season of his career.

And the driver of the No. 15 5-Hour Energy Toyota couldn’t be happier, finishing second in the Chase standings, just 39 points behind champion Brad Keselowski and a mere one point ahead of third place finisher and five time champ Jimmie Johnson.

“Can you believe I beat Jimmie Johnson?” Bowyer said in the media session following his runner up speech at the banquet. “It was a whopping one point.”

Bowyer most likely never dreamed that he would finish the year so strongly, especially after leaving Richard Childress Racing at the end of 2011 and signing with new team Michael Waltrip Racing.

“Those were nerve-racking times in the winter last year,” Bower said. “I had lost my ride at RCR and walked into a new program with a lot of unknowns.”

“But I had a lot of confidence in what was going on,” Bowyer continued. “They paired me with Brian Pattie (crew chief) and a lot of good people and that’s what it takes to be successful.”

Bowyer made the Chase with three victories in the year, including wins at Sonoma, Richmond and Charlotte. He also scored ten top-5 and 23 top-10 finishes for the 2012 season.

Bowyer’s first win was one of his sweetest, coming at the road course of Sonoma, where he had never won before. He dominated that race, leading 71 or the 112 laps.

“It was awesome,” Bowyer said of that first victory for MWR.”I run well at Sonoma.”

“It’s one of those tracks where I’m comfortable from the very first laps I run,” Bowyer continued. “It just came effortless.”

Bowyer has also learned to enjoy fuel mileage racing, winning his next two races at Richmond and Charlotte by saving gas and playing that strategy.

At Richmond, Bowyer recovered from a spin midway through the race due to a cut tire in a close encounter with Juan Pablo Montoya, saved fuel at the end, and went on to Victory Lane. This win put Bowyer in the sixth position to start the run for the championship.

“Thank you, Juan Pablo, for wrecking me and then winning me the race,” Bowyer said exuberantly. “It’s a good way to bounce back headed into the Chase after the bad race last weekend in Atlanta.”

Bowyer’s third win, also in fuel conservation mode, came at Charlotte in October. The driver actually ran out of gas during his burnout celebration and walked with team owner Michael Waltrip to Victory Lane.

For Bowyer, these three wins, as well as finishing second in the Chase were the capstones for his successful season.

“My season highlights were all about winning,” Bowyer said. “Winning on my worst race tracks, a mile and a half and a road course.”

“That says a lot about what we’ve got going on as a race team.”

Unfortunately for Bowyer, however, there were also some lowlights of the season that have, according to the driver, almost overshadowed all of the accomplishments. And those lowlights involve fellow competitor and four-time champion Jeff Gordon.

Interestingly, Gordon and Bowyer have had an interesting relationship throughout the season, clashing on the track but yet also having good runs together at the same time.

When Bowyer won at Sonoma, he spied a picture of Jeff Gordon, five-time Sonoma winner, in the media center after the race, and noted how much bigger that made his win there.

“I looked up and Jeff Gordon was there on the wall, won this race many times, he’s a champion of this sport and I just beat him,” Bowyer said. “You have no idea…I’m a young racer from Kansas.”

Bowyer’s Richmond race was also intertwined with Gordon’s in that, while Bowyer stood in Victory Circle, Gordon scored his own brand of victory with Bowyer, beating out Kyle Busch for the final spot in the Chase.

But it was the altercation with Jeff Gordon at Phoenix, the next to the last race of the season and in the Chase, that has consumed all of the attention, much to Bowyer’s chagrin.

At that race, with Gordon intentionally crashing Bowyer late in the race, leading to a melee in the pits, and Bowyer’s now infamous run to catch Gordon, the spotlight shifted from accomplishment and finishing second place to the newest rivalry in the sport.

“It’s a bad thing,” Bowyer said. “I want to get this behind me because I’ve had such a great year.”

“And I hated that happened at the end of the year because that’s all you guys in the media wanted to talk about,” Bowyer continued. “That’s the story, but that’s what sucked for me, knowing how good of a year we had, how much pride we had, and because of a stupid thing there, that’s what we’re talking about, not how we ran in the Chase and in the season.”

Does Bowyer think that the Phoenix altercation with Gordon cost him the championship? Although still smarting from it all, Bowyer definitely acknowledged that there were other factors that led to his second place Chase standing finish.

“No, we got behind at Talladega and never really bounced back,” Bowyer said. “I knew that was going to be a hard one to overcome, especially as hard as Jimmie and Brad were running.”

“But, look at the way we ran in the Chase,” Bowyer continued. “A bad race was sixth, you know.”

“When you’re running like that, it’s pretty rare,” Bowyer said. “And if we can continue to build on that like I think we can, it gives me a lot of confidence and a lot of pride.”

And that pride and sense of accomplishment is what Bowyer fully intends to focus on for the remainder of 2012, the offseason, and into the New Year.

“When we made the Chase, my realistic goal was to be in the top five,” Bowyer said. “To exceed that…you can’t ask for more.”

“I’m with a group that I can really enjoy,” Bowyer continued. “Anytime you’ve had success the way we’ve had success, you’re bound to have fun and build confidence within yourself.”

“I feel like this year I ran the way I was capable of running and it was super-cool to be a part of it.”