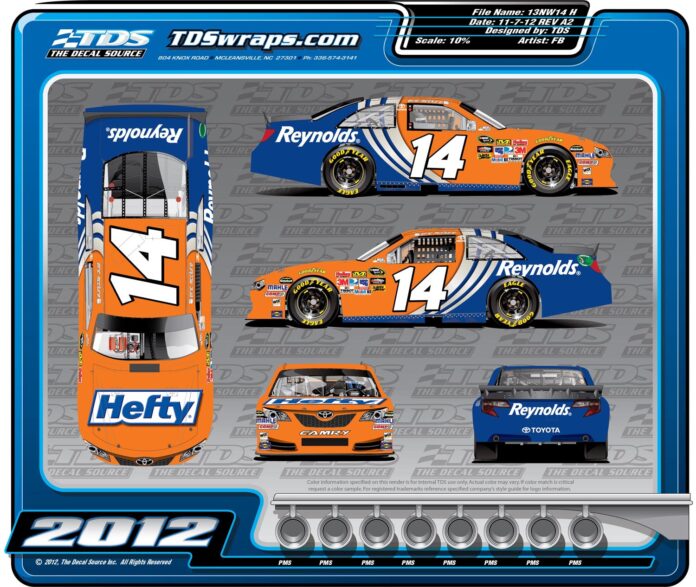 Team McClure, Inc. and TriStar Motorsports NC, LLC announced today that Eric McClure will return to the TriStar organization for the 2013 NASCAR Nationwide Series (NNS) season, driving the familiar orange and blue No. 14 Toyota Camry in all 33 scheduled events. McClure, 34, made his NNS debut in 2003 and will make his 200th start at the season-opener on Saturday, February 23, 2013 at Daytona International Speedway. In his two years with TriStar Motorsports, McClure has recorded one top-15, eight top-20, and 30 top-25 finishes. Additionally, he earned a career-best season-ending points finish of 16th following the 2012 season.

McClure’s long-time partner in NASCAR competition, Reynolds Consumer Products (RCP), is also returning for the 2013 season. With its Hefty® and Reynolds® brands, RCP will continue to serve as primary sponsor in all 33 scheduled events. In their eighth consecutive year as sponsor, the Hefty® brand not only remains as one of the longest-running sponsors in the Nationwide series, but the partnership with McClure also boasts one of the longest active driver-sponsor combinations as well.

NASCAR veteran Wes Ward will continue to lead McClure and the Hefty®/Reynolds® Racing™ team during the 2013 season. This will mark Ward’s 23rd year of NASCAR competition and his second with the 34 year-old driver.

“I’m excited about returning to TriStar Motorsports for the 2013 season and couldn’t be more honored to have the continued support of Reynolds Consumer Products,” stated McClure. “We have had a great relationship with Mark (Smith) and his family the past two seasons so it made the most sense to return to the organization for the upcoming season. We made great strides in our performances the past two seasons and although the 2012 season was an up and down year for me personally, we stuck together as a team and were able to end the 2012 season on a high note. I look forward to what the 2013 season has in store for me.”

Mark Smith, owner of TriStar Motorsports, reiterated McClure’s excitement. “This is the first time in Eric’s career that he has stayed with an organization for more than two years and that is not only a testament to TriStar Motorsports, but also to the success we have had together on the track, especially the last quarter of the 2012 season. I am honored Eric and the Hefty® and Reynolds® brands decided to come back for the 2013 season and I am looking forward to the continued success on the track this season.”

Two of the most trusted household brands, Reynolds® and Hefty®, joined together as Reynolds Consumer Products in 2010. While the establishment of this new company made it official, the truth is that Reynolds® and Hefty® products have been found side-by-side in the kitchens of American families for more than three generations.

The creation of both the Reynolds® and Hefty® brands is the direct result of American ingenuity mixed with a bit of elbow grease. Reynolds Wrap® Foil was invented after the use of aluminum for military purposes diminished after World War II and became a new staple for American kitchens. Hefty® Waste Bags were first developed with excess material from an early plastics innovator, creating another household essential.