Reed Sorenson: “We Have a Shot To Win” 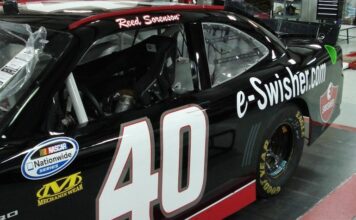 Reed Sorenson began his NASCAR career with Ganassi Racing in the No. 41 Dodge in 2005. He was immediately a force to be reckoned with, scoring his first victory at Nashville Speedway from the pole and crossing the finish line 14 seconds over the competition. He went to victory lane once again at Gateway and lead the standings by 51 points and finished the season fourth overall.

Beginning a full-time schedule in the Cup series and double duty in the Nationwide series in 2006, Reed completed the season 10th in Nationwide standings and earned five top-10 finishes in Cup. In his rookie Cup season, he became the youngest pole winner at Indianapolis Motor Speedway at the age of 21.

His career went from the best of highs to the worst of lows when Sorenson was released from driving duties at Turner Motorsports in October 2011. After taking Turner Motorsports to victory lane and to third place in the championship standings, this came as a shock to the NASCAR world. Turner gave no excuse for the release.

Now at the age of 27, Sorenson finds himself racing full-time in the Nationwide series once again with The Motorsports Group, much to the excitement of his fan base. “I came in and he told me his plan as far as trying to make his race team better and trying to improve his race team with his engine program that he’s started up – he’s hoping that’s a step forward compared to last year and what he had. You know, he kind of filled me in on – this is the year where he’s going to try and put everything he possibly can into the race team and making it better. I felt pretty encouraged about that and we just talked a few more times and said alright let’s do it.”

Formerly known as Key Motorsports, TMG currently fields the #40, 42, 46 and 47 entries in the NASCAR Nationwide Series. Curtis Key is approaching his 20th anniversary as a team owner in NASCAR’s top three divisions.

“I hope this year will be the best that this team has ever ran”, Sorenson said when I asked about his expectations for the 2013 season. “I hope that I can bring, as a driver, more experience than they’ve (TMG) had in the past. We know what we’re up against; we’re not a Cup team, as you can see. I mean you’re here, this is a small operation with a handful of people and we all know that – anybody from me, to Curtis, to the guys working down there(in the shop), we know what we’re up against.”

Unlike most teams, TMG was not able to test their cars in the off season or at Daytona in January. Despite the odds against them, Sorenson is up for the challenge and has a positive outlook.

“Going into Daytona, the way the racing is there, I feel like we have a shot to win. I love racing there and I’m going there to win. After Daytona, we kind of have to see where we’re at and see what we need to work on. Our expectations, I guess, to put it in a simple form, is to go out there and run well and figure out where we need to get better and do that.”

The No. 40 is going into Daytona on the right foot with a primary sponsor of E-Swisher for the DRIVE4COPD300. Instead of smoke, e-Swisher electronic cigarettes emit a vapor that evaporates in seconds, with only a faint scent that doesn’t linger. The e-cigarettes are infused with high-quality nicotine, giving you the full satisfaction of a regular cigarette.

“We’re excited about them, they’ve never been in the sport, it’s a new product,” said Sorenson. “Their excited about their new product and telling people what it is. They will be at the race, so that’s exciting. I’ve been a part of bringing a new sponsor into the sport in the past (with Discount Tire) and they’re still in the sport, so hopefully this is a relationship that can last and we can build on it in the future and I’m excited about them. When you have a new sponsor coming in your kind of want to show them all about NASCAR and what it’s about and how they can get their monies worth out of it. We’ll do the best job we can to show them a good time and show them NASCAR is a place they need to be.”

Going into the restrictor-plate track of Daytona, Sorenson has one top-five and three top-10 finishes with zero DNF’s.

To keep up with Reed and his No. 40 TMG team, be sure to follow him on Twitter @ReedSorenson7 and @TMG_team40.

SM Staff
Previous article
Breaking Barriers and Blazing Trails; Danica Rockets to 500 Pole
Next article
It’s Hard to Like a Winner! What Does the Fan Base Really Want?