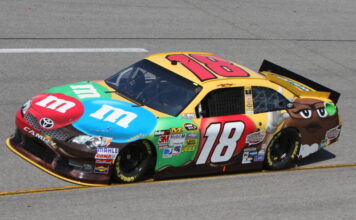 After a blazing fast weekend at Kansas Speedway, the NASCAR world sets its sights on Richmond International Raceway and the second night race of the year for the NASCAR Sprint Cup Series and NASCAR Nationwide Series. As one of the few short tracks on the circuit, Richmond always provides great racing in each series and this weekend’s events should be no exception, especially with the Sprint Cup drivers getting their first shot at this track in the new Gen6 car.

For the third time this season, the Sprint Cup Series makes its way to a short track and will take on the 3/4 mile Richmond International Raceway under the lights on Saturday night for the first night-time short track race of the season. Will Joe Gibbs Racing and Hendrick Motorsports continue their stranglehold on Victory Lane with the new Gen6 car, or will we see a new contender emerge after 400 laps in the Toyota Owners 400?

Who To Watch: With four wins in 16 races at Richmond along with 12 top fives, 13 top tens, one pole, 891 laps led, and an average finish of 5.4, Kyle Busch leads all active drivers with the best statistics at this track. After a terrible weekend last week in Kansas, this race could be just what the doctor ordered for Busch to get back to his winning ways.

The rest of the drivers in the top ten statistically at Richmond (Mark Martin, Dale Earnhardt, Jr., Jeff Gordon, Carl Edwards, and Jeff Burton) could also be threats here Saturday as they have a combined seven wins and average finishes of 15.0 or better.

One last note of importance that could come into play here is that Toyota has won seven of the last eight races at Richmond, will we see their dominance continue or will Chevrolet or Ford have something to say about it?

Friday night’s running of the Nationwide Series’ ToyotaCare 250 will be full of Sprint Cup regulars coming in to see if they can steal the show away from the Nationwide regulars. Sounds like a recipe for some great racing pitting the Nationwide drivers running for points against their Sprint Cup counterparts who just want the trophy and the win.

Who To Watch: To say that Kyle Busch has been dominating the field this season in the Nationwide Series would be an understatement and Busch is poised to continue that dominance in Friday night’s race. Heading into the weekend, Busch has four wins, nine top fives, 12 top tens, three poles, 772 laps led and an average finish of 6.7 in 15 starts at Richmond. However, another Sprint Cup regular hot on his heels at Richmond is Kevin Harvick, who has six wins, 15 top fives, 18 top tens, two poles, 1089 laps led, and an average finish of 7.0 in 23 starts. Following behind Busch and Harvick is a slew of Nationwide regulars, including: Brian Vickers, Reed Sorenson, Austin Dillon, Justin Allgaier, Trevor Bayne, and Parker Kligerman, all of whom have average finishes ranging from 12.4 to 15.0.