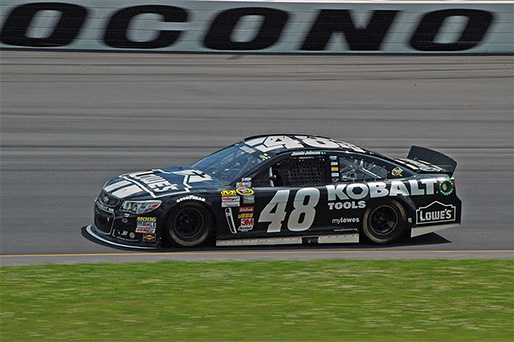 1. Jimmie Johnson: Johnson dominated at Pocono, leading 128 of the first 160 laps, and won the Party At The Poconos 500. His sizable lead in the point standings is now even larger, a 51-point cushion over Carl Edwards.

“The depth of my domination cannot be overstated,” Johnson said. “There was a party in the Poconos, but there was no parity.”

2. Matt Kenseth: Kenseth finished 25th at Pocono after late-race incident with Juan Montoya caused a spin and a loss of track position. Kenseth fell two spots in the point standings to sixth and trails Jimmie Johnson by 103.

“At least we didn’t have an engine failure,” Kenseth said. “Toyota Racing Development has really worked tirelessly on their engine program. Unlike their engines, they just won’t quit.”

3. Carl Edwards: Forced to make an unscheduled pit stop to check lug nuts, Edwards finished 18th at Pocono, equaling his worst finish of the year. He remained second in the point standings, and now trails Jimmie Johnson by 51.

“In the Party In The Poconos,” Edwards said, “we were hoping to party like it was ’99.’

“Johnson has been so dominant, there are those who think he will run away with the championship. That’s ludicrous. He can walk away with it.”

4. Kevin Harvick: Harvick overcame an early pit road speeding penalty to take ninth at Pocono, earning his sixth top-10 result of the year. He is fifth in the Sprint Cup point standings, 87 out of first.

“Jimmie Johnson has three wins,” Harvick said. “I have two. I’m keeping him in my sights. I may be the only driver standing between Johnson and a sixth Cup. He knows I’m coming; Richard Childress knows I’m going.”

5. Kyle Busch: Busch, in the M&M’s No. 18 Toyota, came home sixth at Pocono, joining teammate Denny Hamlin, who finished eighth, in the top 10.

“The ‘Party In The Poconos 400’ was presented by Walmart,” Busch said. “Luckily, we were warned to look out for ‘falling prices.’”

6. Dale Earnhardt, Jr.: Earnhardt finished third at Pocono, posting his fourth top 5 of the year. He is fourth in the Sprint Cup point standings, 82 behind Jimmie Johnson.

“As you may know,” Earnhardt said, “I’ll have a Superman paint scheme on my car at Michigan. As the man most known for his winless streaks, I’m more likely to see Lois Lane than Victory Lane.”

7. Clint Bowyer: On a tough day for Michael Waltrip Racing, Bowyer finished 15th in the Party In The Poconos 400. Bowyer remained third in the point standings, 69 behind Jimmie Johnson.

“I’m still looking for my first win of the year,” Bowyer said. “The law of averages says my winless streak should soon be a thing of the past. Much like a TNT commercial break, it has to end soon.”

8. Kasey Kahne: Kahne suffered early drive train problems from the start at Pocono, resulting in a disappointing 36th. He dropped one place in the standings to eighth and is 121 out of first.

“There was no Party In The Poconos for me,” Kahne said. “The No. 5 Hendrick car ran like crap. So, you could say our engine was a party ‘pooper.’”

9. Brad Keselowski: Keselowski led four laps early at Pocono but faded to 16th, continuing an uneventful season for the defending Sprint Cup champion. He is ninth in the point standings, 123 out of first.

“You probably saw me make an incredible save after contact with Tony Stewart,” Keselowski said. “I believe I can top that save, but only if I can ‘save’ my season.

“I was docked six points for failing inspection at Dover last week. But I’m trying to keep my head up. When it seems like your losing points every week, it’s difficult to remain ‘positive.’”

“Last week at Dover,” Stewart said, “Jimmie Johnson got ‘Smoked.’ This week at Pocono, he returned the favor, to the entire field.”