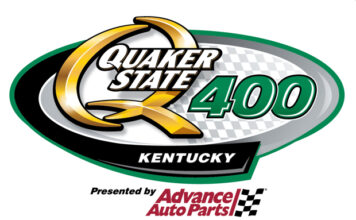 After a weekend of turning left and right at the road courses at Sonoma and Road America, the NASCAR Sprint Cup Series and NASCAR Nationwide Series, joined by their NASCAR Camping World Truck Series counterparts, head back east to the 1.5 mile Kentucky Speedway for the second tripleheader of the season. This time around all three races will be under the lights of this oval that is a relative newcomer to the schedule, having only hosted all three series for the past two years.

As the Sprint Cup Series heads into Kentucky Speedway for a Saturday night showdown under the lights, the series reaches an important milestone for the season. This weekend’s race marks the beginning of the 10 races before the start of the “Chase for the Sprint Cup”. The so-called “Race for the Chase” sets off a mad dash for drivers trying to accumulate wins and rack up points to either make the Chase or improve their position in the standings for a better seed once the Chase starts. There are also a couple of unknowns surrounding this race since the teams have a slim notebook on setups for this track since it has only been on the schedule since 2011 and the Gen6 makes its Kentucky debut this weekend as well.

Who To Watch: Austin Dillon made his first two starts at Kentucky in 2012 and has a perfect record thus far at the track with two wins, two top fives, two top tens, two poles, 257 laps led and an average finish of 1.0 in his two starts. If Dillon can continue his Kentucky magic, the No. 3 Chevrolet will be tough to beat Friday night.

For the first time in three weeks, the Camping World Truck Series heads back to the track to kick off the weekend tripleheader with their race on Thursday night. As in the Nationwide Series race, a couple of Sprint Cup regulars, Kyle Busch and Brad Keselowski, will be running this race to try and complete the tripleheader weekend. With that in play, we will see a battle between the up and comers that are regulars in this series and the Sprint Cup regulars that have reached the upper echelon of the sport. Who will win out between the two? Tune in Thursday to find out.

Others to keep an eye on include rookies Jeb Burton and Darrell Wallace, Jr, both of whom have never raced at Kentucky and Sprint Cup champion Brad Keselowski, who will be driving his own team’s truck and trying to capture the Truck Series win that has eluded him thus far in his career.