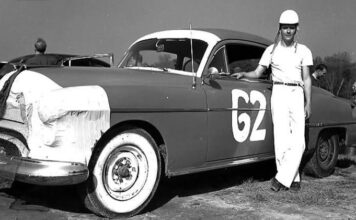 NASCAR was born in the southern United States so it may surprise you to learn that in 1950 it was a young man from New York who won the Grand National Championship – the forerunner to today’s Sprint Cup Series.

Bill Rexford also has the distinction of being the youngest driver to ever win a Cup Championship, winning the title at the age of 23.

Rexford began his racing career in the 1940s. He worked in his dad’s Chevrolet dealership while competing at local tracks. After serving two years in the United States Navy, he continued racing until he caught the eye of racing promoter, Ed Otto. Otto encouraged Rexford to make the move to NASCAR in 1949.

In 1949, NASCAR’s inaugural season, Rexford made three starts and finished 12th in the standings.

The next season he competed in 17 races, including the first Southern 500 at Darlington, South Carolina where he finished fourth.

By season’s end, he was in a battle for the championship against Fireball Roberts. A blown engine almost cost him the title. However, luck was on his side when Roberts, who was racing for the win, blew his engine less than 50 laps from the finish.

Rexford won the crown and became NASCAR’s second champion in its premier series but the title was not without controversy.

Lee Petty should have easily captured the championship but was stripped of approximately 800 points for racing in non-NASCAR sanctioned events. If not for that point reduction, Rexford would have lost his claim to fame.

During the 1951 season, Rexford won the pole at Canfield, Ohio but later crashed and suffered minor chest injuries. He only competed in 11 NASCAR sanctioned races that year and competed in his last Grand National race in 1953.

On March 18, 1994 Rexford passed away after several months of illness.

Rexford is the only series champion that was not included among NASCAR’s 50 Greatest Drivers in 1998.

1995 Inducted into the Friends of Auto Racing Hall of Fame

1997 Inducted into the Chautauqua Sports Hall of Fame

Angela Campbell
A native of Charlotte, NC, Angela (Angie) was first introduced to racing by her father. An avid fan of NASCAR, she found a way to combine her love of racing with her passion for writing. Angie is also an award-winning member of the National Motorsports Press Association. Follow her on Twitter @angiecampbell_ for the latest NASCAR news and feature stories.
Previous articleScott Dixon and Team Ganassi Make Indy History at Pocono with Win; Podium Finish
Next articleThe Charlotte Motor Speedway: A Clash of Tradition and History Make Up This Gem