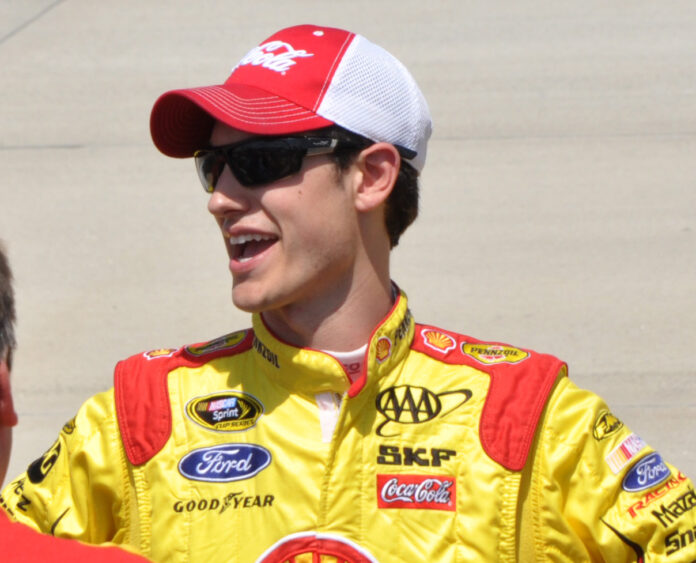 Joey Logano announced the fulfillment of a dream come true today at New Hampshire Motor Speedway with the establishment of a foundation bearing his name at a track which means so much to him.

“We’re here to announce the formation of the Joey Logano Foundation, which is something that I’ve been wanting to do the last few years,” the driver of the No. 22 Shell Pennzoil Ford said. “This is a great race track to announce this, being my home track here in New Hampshire.”

With Logano being able to fulfill his dream job behind the wheel of a Cup car for Penske Racing, he now feels in the position to help others achieve their dreams. And he hopes that his NASCAR fan base will be right there with him helping others.

“I feel like I’ve been very blessed and to be able to drive a race car for a living is a dream come true for me,” Logano said. “I realize that not everyone is as fortunate as myself so what I want to do with my Foundation is directly impact people’s lives to make them better, whether that’s fixing someone’s roof or helping a soldier who came back from Iraq outfit his home for a wheelchair.”

“Whatever that is, I want to be able to do that,” Logano continued. “And I want the NASCAR fans to help point out who these people are and then we will help them.”

Logano is already busy fulfilling the dreams of others through his brand new Foundation. In fact, the first event of five more to come will happen right at the Magic Mile this weekend.

“Our first event is actually this weekend,” Logano said. “We have the Connecticut State Police Crime Squad, who investigated the Newtown school shooting, here this weekend.”

“I was in Las Vegas for the race and walking around the Caesar’s Palace shops when a group of guys recognized me,” Logano continued. “I found out they were part of the Crime Squad at Newtown.”

“I really wanted to do something for Newtown at the time but I didn’t know what to do because there were a lot of people helping out,” Logano said “But I wanted to find the people that were getting lost in the shuffle.”

“After talking with these guys, I realized that they were the guys that were getting lost in the shuffle,” Logano continued. “With New Hampshire Motor Speedway’s help, we’ve been able to bring 200 of them up here with their families to enjoy an all-American NASCAR race.”

“I’m really excited about that as the first deal we’re going to do and we have four more coming up, at Atlanta, Charlotte, Michigan, and Phoenix.”

Logano has also had some help with making his Foundation dream come true. Some of his major partners in his new endeavor include Coca Cola, the NASCAR Foundation, and his sponsor Shell Oil Company.

“This organization wouldn’t have started without the Coca Cola’s Chug for Charity program,” Logano said. “It helped me out with my charity donations and to have them help me start this is a dream come true.”

“Also, with NASCAR, we will be doing some online auctions with the NASCAR Foundation, some for race experiences which will be cool,” Logano continued. “Obviously Shell Pennzoil has also helped and backed me one hundred percent.”

Tom Swindell, NASCAR Director of Racing Operations, presented Logano with a $10,000 check on behalf of the NASCAR Foundation, as did the Shell Oil Company, who also presented their young driver with a $10,000 dream gift.

“I’ve been around Shell for a long time, thirty-three years, and I’ve watched what we’ve done for charity and kids in the community,” Paul Stanifer, Shell Oil Company General Manager, said. “For him at his age to decide to do what’s right for the community is kind of phenomenal.”

“It fits well with us because our customers live in the communities,” Stanifer continued. “So, this will be a national fit.”

“We’re going to throw a lot of resources to Joey and try to engage our wholesalers in areas that are important to us,” Stanifer said. “That will be a nice fit because it’s more about people helping people.”

While Logano is most excited about making his Foundation dream a reality, he also hopes to have a dream finish at New Hampshire Motor Speedway. And the driver of that No. 22 Penske race car is counting on his recent tire test at the track to help him to do just that.

“This has been a hit or miss track for me,” Logano admitted “I have either run decent or really struggled here.”

“This is a very difficult race track to make a car work,” Logano said. “There will be a few cars that can do it and they will stand out.”

Logano is certainly hoping that he will be one of those race cars standing out at the Magic Mile. But even more important to the young driver is that he can do something good by making dreams come true for others.

“This Foundation is not about me,” Logano said. “My name is on it, but that is to bring awareness to it.”

“This Foundation is about other people and about how we can help other people,” Logano continued. “This was the right time for me to do this.”