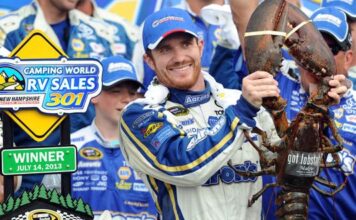 On a steamy day in New England where the action on the track was just as hot, here is what was surprising and not surprising from the Camping World RV Sales 301 at New Hampshire Motor Speedway.

Surprising:  While usually on target, Chad Knaus’ prediction of his driver motoring through the pack to the front only partially came true. Johnson, who started dead last in his No. 48 Lowes Chevrolet due to failing post qualifying inspection, made his way through the field to finish just shy of the top-five in the sixth spot.

But although his prediction of a last to first performance was not fulfilled, crew chief Knaus felt that he and team 48 had made the statement they wanted to make in light of their inspection failure.

“We made the best of a bad situation and that’s all you can do,” Knaus said. “We wanted to make it a non-issue and I think that’s exactly what we did.”

With that top-10 finish, Johnson remains solidly in the points lead as well, 56 points ahead of runner up Clint Bowyer.

Not Surprising:  Just as the chemistry between Knaus and Johnson led to a decent run after adversity, it was not surprising that the chemistry between Rodney Childers and Brian Vickers achieved their dream of taking the Michael Waltrip Racing’s No. 55 Aaron’s Dream Machine to Victory Lane.

Vickers, who battled back from life-threatening blood clots to race again, credited his relationship with crew chief Childers, which has spanned almost his entire lifetime, as making the difference in his win at the Magic Mile.

“I can remember the day Clyde (Vickers, Brian Vickers’ father) walked into our go-kart shop in Cornelius, North Carolina and said he wanted to buy his eight-year-old kid a go kart,” Childers said. “So, we got it together overnight and they came and picked it up the next day and then a good friend of ours helped Brian get started.”

“I just thank God for the chance and opportunity to come back and this team and Rodney believing in me and giving me a second chance,” Vickers said. “That’s a testament to the whole team and everyone at Michael Waltrip Racing.”

Surprising:  Joey Logano, a former New Hampshire winner, was surprisingly the first caution of the day, blowing a tire and spinning out on Lap 4 of the race. This is the second race in a row where tire failure has contributed to the No. 22 Shell Pennzoil Ford team’s struggles.

“The left rear tire blew out,” Logano said. “It isn’t like we touched anyone and rubbed it to make it go down, it just blew out.”

Logano has a right to be mad, as he finished 40th and even more important took a significant hit in the point standings, losing three positions and falling to 18th.

Not Surprising:  Whether it was the combination of the heat or the grueling schedule as the garage readied for the first weekend off in a very long time, it was not surprising that tempers were flaring on the one-mile track and that there were more cautions in this one race than in the past three New Hampshire races combined.

The most caustic exchange happened right after the race end when Kyle Busch had some choice words for Ryan Newman and vice versa.

“Newman is the biggest stupid idiot out here and a big ogre,” Busch said. “I’m glad he’s out of a job.”

“I’m just afraid if I re-arranged his face I might fix it,” Newman responded. “He’s frustrated finishing third or wherever he was after hitting me.”

“He’s a heck of a talent but he’s not very bright,” Newman continued. “I’ll leave it at that.”

Surprising:  Just when it appeared that Stewart-Haas Racing was on the upswing, another surprisingly bad day occurred in New Hampshire.

Smoke ran out of gas on the final lap to finish 26th, Patrick wrecked into her Rookie of the Year competitor to finish 37th, and Newman had his aforementioned tangles with the Busch brothers and finished 39th.

“Thought we were about three quarters of a lap to the good,” Smoke said. “Obviously didn’t get as much gas saved as I thought we would.”

“I feel bad,” Patrick said. “What can I say? We were having a reasonable race and just didn’t mean to do it.”

“The worst part is that I didn’t want to take anybody with me.”

Not Surprising:   The unfortunate struggles of Denny Hamlin continued at New Hampshire, with a lug nut issue and a 21st place finish. The driver of the No. 11 FedEx Toyota sits 25th in the point standings, very far out of Chase contention.

Surprising:  One of the surprises of the race was Aric Almirola, driver of the No. 43 Smithfield Ford, who finished fifth thanks to some good pit strategy and a great call from atop the box.

“When everybody else stayed out that gave us the opportunity when everyone else came to pit to make it on fuel,” Almirola said. “And we stayed out.”

“That was a great call by Todd Parrott (crew chief),” Almirola continued. “It is a great way to go into the off weekend.”

Not Surprising:  At a track that he loves, Jeff Burton finished top three to no one’s surprise. And with his good finish, Burton pronounced that he was still in Chase contention, contrary to everyone’s perception.

“We had a really good car,” the driver of the No. 31 Caterpillar Chevrolet said. “A lot of people have given up on this team but we haven’t given up on ourselves.”

Surprising:  Brad Keselowski and company showed his championship caliber by bouncing back at the Magic Mile. The driver of the Blue Deuce finished fourth, in spite of the ‘grueling race.’

“We fought hard all day and came home with a fourth so that was a decent day,” Keselowski said. “Not the win I wanted for sure.”

“But it is still a solid day though and something to be proud of.”

Not Surprising:  While all the drivers complained about the difficulty of the track and race, Carl Edwards not surprisingly termed it a battle field.

“That was a hell of a battle,” the driver of the No. 99 Fastenal Ford said. “Everybody fought really hard the whole time and we ended up with a top-10.”

“We were able to get a good finish out of a crazy day.”

Surprising:  Even with having to stop in the middle of the race track to avoid the Newman/Kurt Busch crash, Matt Kenseth pulled off a surprisingly good finish. The driver of the No. 20 Dollar General Toyota finished in the ninth position.

“I had a good car, probably the best car I’ve ever had here,” Kenseth said. “Kind of lost track position when Kurt cleaned out Newman.”

“I had to stop and miss that wreck.”

Not Surprising:  After a grueling race and first part of the season, everyone needed to relax according to Jeff Gordon, who managed to salvage a tenth place finish after a challenging race at New Hampshire.

“Everybody, no matter whether you’re leading the points or running where we are in points or 30th in the points, everybody has to take moments to step away and relax a little bit and regroup,” Gordon said. “And so, this off-weekend will be good for everybody.”

SM Staff
Previous article
From A Hospital Bed To Victory Lane; Brian Vickers Has Persevered
Next article
Dillon and Jones at odds after Iowa altercation