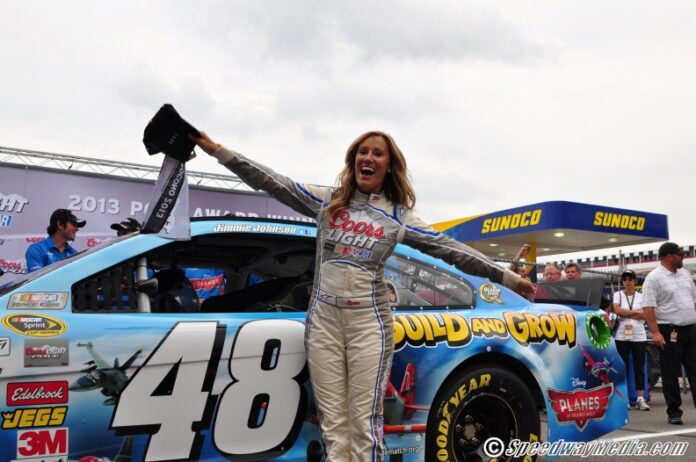 In addition to tackling the ‘Tricky Triangle’, testing schedules, and making the championship Chase, the stars of NASCAR, from Jeff Gordon to Jimmie Johnson and Danica Patrick, also took some time to talk kids in the midst of their on-track activities.

Even Miss Coors Light Rachel Rupert got into the kid-friendly act after qualifying was completed for the GoBowling.com 400.

Jimmie Johnson, Pocono pole-sitter, five-time champion and current points leader, was all about kids when it came to talking about the new paint scheme on his No. 48 Lowe’s Planes Chevrolet, which features all kinds of kid-friendly characters from the new Disney movie ‘Planes’.

“The paint scheme is really cool,” Johnson said. “It’s great to have them on the race car.”

“It gets my daughter excited.”

Johnson also had the future fans of the sport of NASCAR on his mind as well, especially hoping that his cool new paint scheme might just attract the next generation.

“The way I became a fan was going to the race track as a kid,” Johnson said. “If we can capture young eyes and have them watch a race for whatever reason, if it’s a cartoon that they enjoy or a movie from Disney that they enjoy, it’s helpful.”

“It’s fun to have the car look different and everything that kind of spins off from it,” Johnson continued. “We have had very fast race cars when we have had the Disney movies on our race car.”

Johnson almost sounded like a kid himself when he talked about meeting comedian Dane Cook, star of the animated film ‘Planes’ and voice of the character Dusty, a little crop duster with a ton of heart. Johnson is also pretty stoked for the ‘Planes’ inspired flyover as well.

“Excited for the opportunity that Dane Cook is going to be here this weekend, which will be fun,” Johnson said. “I’m sure he will make some people smile and laugh.”

“From what I understand, the fly over is going to be exciting too with the plane from the movie,” Johnson continued. “All in all, just a fun way to tie it all in.”

“I think it’s good for the track, good for Lowe’s, good for myself, good for NASCAR and hopefully we get some new young fans out of it.”

Jeff Gordon, who will be celebrating his 42nd birthday at Pocono this weekend, also had kids on his mind. In fact, he even speculated if his own children, daughter Ella and son Leo, would follow in his footsteps to become racers in their own rights.

“My daughter, I kind of want to wait and see what kind of interest level she has,” Gordon said of Ella potentially jumping behind the wheel of a race car. “Just knowing the things she’s interested in, I don’t see her being one, but she is very competitive.”

“My son just loves race cars already at a very young age,” Gordon continued. “He reminds me of myself.”

Gordon also admitted that Leo reminds him of himself in terms of initially not being interested in being in a race car, but then once in it, falling absolutely in love with it.

“That’s kind of how he is,” Gordon continued. “Not really the first one to just go jump in at it, but once he does, he’s pretty excited about it and he does very well.”

Gordon admitted that, if his children do race, he will be one of those worrying parents as he watches each of them compete.

“It’s nerve-wracking for me to consider and think about that option because every parent that I talk to says that it’s like the worst torture you could ever have because you’re just no in control,” Gordon said. “That’s your child so you have this fear of just them not winning or getting hurt, all these things that you didn’t think about when you were doing it.”

Even Danica Patrick, driver of the No. 10 GoDaddy Chevrolet got into the mix of kid talk, although it was certainly not about any children of her own.

Patrick was sharing her discussions with the new CEO of GoDaddy Blake Irving when the subject of kids came up in the mix of the new business relationship talk.

“We’ll Blake loves racing which is good,” Patrick said. “He’s got a lot of great ideas and a lot of big plans for GoDaddy.”

“His son is really into cars and that’s always a good thing when someone like that likes racing,” Patrick continued. “But you know, it’s still about making that relationship work and making sure there is a return on investment for what they’re doing.”

So, is the next generation of NASCAR fans, drivers and sponsors ready? If Jimmie Johnson, Jeff Gordon and Danica Patrick have anything to do with it, the future of the sport does indeed seem kid-friendly, at least for this race weekend at Pocono.