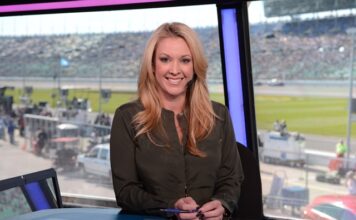 While the contenders for the NASCAR Chase may still be uncertain at present, there are two NASCAR personalities who are most certainly looking forward to the special event, NASCAR Contenders Live Sponsored by Toyota and Sprint, where fans will formally meet the twelve Chase competitors.

Nicole Briscoe, ESPN analyst, and her colleague and NASCAR Hall of Famer Dale Jarrett will both take lead roles in the NASCAR Contenders Live event at Chicago’s Navy Pier in the Grand Ballroom from 1:30 to 3:00 PM CT on September 12th. The event, back by popular demand for the second year in a row, will be featured prior to the first Chase race at Chicagoland Speedway.

NASCAR Contenders Live will begin with Dale Jarrett sitting down in front of the fans with NASCAR President Mike Helton to discuss how NASCAR will approach officiating of the final races to decide the Sprint Cup championship.

“I think the biggest thing that I’m excited about in the NASCAR Contenders Live event is creating a little excitement with the fans before the get to see the twelve Chase drivers,” Jarrett said. “Mike Helton and myself have been around this a long time, have experienced a lot and seen a lot of things happen and this is an opportunity to set things up for the fans and to give them a perspective from the NASCAR-side of the Chase.”

“We’ll talk about what NASCAR expects from the drivers and even what they may or may not tolerate just because it’s kind of the playoffs,” Jarrett continued. “I wasn’t a big fan of the Chase when Mike Helton first talked to me about it but I’ve become a huge fan of it because it is exactly what our sport needs.”

Jarrett is excited to talk to Helton about the Chase format, as well as other aspects of the Chase scenario itself.

“NASCAR knows that every driver involved will make a great champion for the sport but they want to make it as fair as they can make it,” Jarrett said. “I want to ask Mike if they scrutinize with these twelve teams any more than others.”

“I’ll talk to him about the pressure ramping up in NASCAR control to make calls and are they more lenient or strict with those Chase drivers as they battle for the championship,” Jarrett continued. “I think it’s great for the fans to see the NASCAR side of it.”

“We’re very fortunate in our sport to have someone like Mike Helton who understands about everything involved in our sport,” Jarrett said. “He can answer and talk on all different levels and I think the fans appreciate that.”

Jarrett is not only looking forward to discuss the Chase format with Helton but also sharing his thoughts with the NASCAR President on the Chase itself.

“From my side, even though I’m going to do most of the questioning, there will also be opportunities to throw in my ideas on the Chase,” Jarrett said. “Right now we have no idea who is going to be in the Chase and that’s a great thing.”

“For us in television, it gives us the next three weeks to keep up with and talk about all the scenarios.”

Jarrett has some ideas about who may be a favorite for the Chase, but is also intrigued by the wide-open nature of the Chase to date.

“You have to make Jimmie Johnson a favorite but after what happened this past week, you have to wonder just how much anyone can be considered a favorite,” Jarrett said. “We say this every year, but the competition does get stronger each year.”

“There are more teams capable of putting together a ten race stretch where they do things right,” Jarrett continued. “It literally could come down to four or five drivers at Homestead to win the race and take the championship.”

“And it might take like a Tony Stewart a few years ago winning the race to win the championship.”

“I’m more excited about this year than I ever have been because you have drivers trying to make history and those that are looking for that first ever opportunity,” Jarrett said. “And then you look at someone like Kurt Busch at what some would consider a small team showing his muscle.”

“And you have his brother Kyle Busch, who wants to do well in the Chase just so we will quit asking him about it,” Jarrett continued. “So, there are a lot of great storylines and I think it’s pretty wide open.”

So what advice would the NASCAR veteran give to the drivers who will be competing for that coveted Sprint Cup?

“Although I’ve never raced for the championship in this format, I know what this time of year is like when you are racing for a championship,” Jarrett said. “The biggest thing is to embrace the moment in these final ten weeks.”

“You like to think that you will be in that position again but the reality is that you may not,” Jarrett continued. “It’s not that you can get rid of the pressure because that pressure is there every week but have to have fun with it.”

“Have a good time because if you can’t do that, it’s not worth doing.” In addition to sharing his words of wisdom for the twelve special drivers and lobbing questions at the NASCAR President, Dale Jarrett thinks that the NASCAR Contenders Live event is special for one other reason.

“With this event, the thing that intrigues me is the opportunity for the fans to see the drivers as they prepare for the Chase,” Jarrett said. “There will be serious questions but there will also be some fun.”

“I love the fans interactions with the drivers.”

After his portion of the program concludes, Dale Jarrett will hand the baton over to his ESPN colleague Nicole Briscoe for the main event of introducing the Chasers to the fans.

“I am the host of NASCAR Contenders Live, which for me is super-exciting because it’s more of a relaxed event,” Briscoe said. “The drivers are away from the track and not in that competitive place so you get to have more fun with the guys.”

“Plus the fans are involved and that is the most fun.”

While Briscoe approaches every aspect of her job seriously, she has not yet developed the questions that she will ask of the Chase drivers and for one very good reason.

“At this point, we don’t even know the bottom half of the Chase,” Briscoe said. “I can pretty much guarantee Jimmie Johnson and I think this weekend a few more drivers may lock into the Chase.”

“But the rest, I swear will be decided on that last lap at Richmond.”

Like Jarrett, Briscoe acknowledges that the NASCAR Contenders Live event is one where the drivers’ personalities can shine. And she too has the opportunity to relax a bit herself and let the fans see her personality as well.

“The fans want to see the drivers’ personalities and I’ll let them go wherever they want to go,” Briscoe said. “It’s totally an opportunity for me to let my hair down as well.”

“I enjoy the personality side of it because that makes this so interesting and different.”

Does Briscoe expect some interplay between the drivers as they come out to be questioned by her?

“I think there will be some trash talking because the drivers will come on in groups,” Briscoe said. “You will have those different personalities up there and that will make it be the event.”

Just like Jarrett, Briscoe is also most intrigued with the whole notion of the Chase because in her mind, it is ‘one giant question mark’ at present.

“I think when I look at the season right now to me it is one giant question mark on how the Chase will play out and who will make it,” Briscoe said. “You look at Joey Logano who just won and he got closer but that doesn’t guarantee him a wild card.”

“Then you look at a guy like Martin Truex Jr. who was so excited after his win at Sonoma and then look at how the next races have played out,” Briscoe continued. “Then you have to look at the question marks around Kurt Busch in terms of what is he going to do next year and what can the little team that could do.”

“And then if you look at the top of the points, what Jimmie Johnson has done so far is really quite remarkable.”

“He is one of the greatest drivers that the sport has ever seen and I have so much respect for what he has done,” Briscoe said. “So, I look at who can compete against Jimmie Johnson and is there anyone that can run with him?”

“That’s my question mark about how this is going to play out.”

Fans who wish to participate in NASCAR Contenders Live Sponsored by Toyota and Sprint can visit www.NASCAR.COM/ContendersLive to purchase tickets for $10 dollars and to enter the Contenders Live sweepstakes for a chance to win a new 2014 Toyota Tundra CrewMax Limited, as well as other prizes.

SM Staff
Previous articleKenny Wallace in the No. 29 American Ethanol Toyota Camry for Bristol
Next articleKyle Busch uses late caution to razzle Bristol with some dazzle