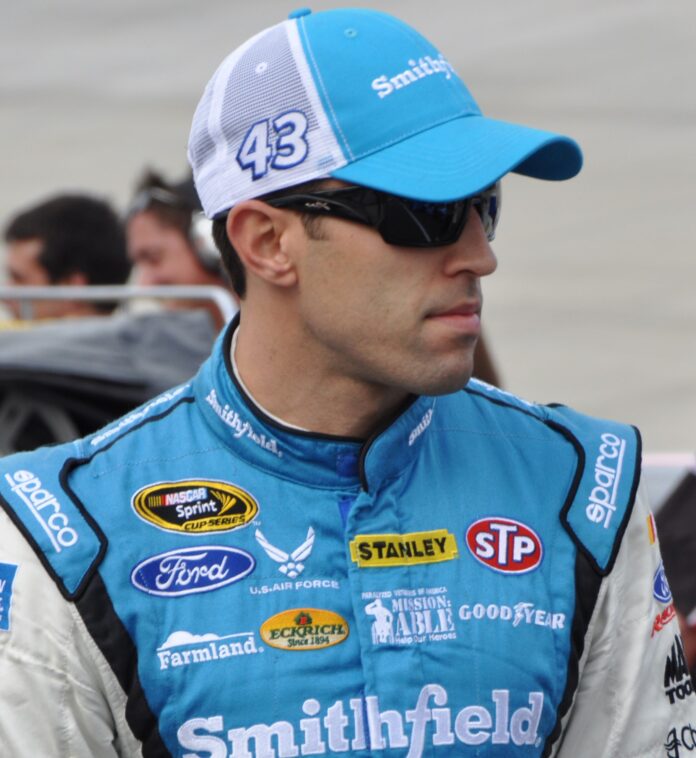 Aric Almirola has a smile on his face and a spring in his step as he continues to bring home the bacon for in his No. 43 Smithfield Foods Ford for Richard Petty Motorsports.

And he could not be happier as he prepares to race at the ‘Monster Mile’, which he firmly admits is his favorite track on the circuit.

This will be Almirola’s ninth start at Dover International Speedway, where he won in the Truck Series in 2010 and where he posted his best finish of sixth in 2012.

“This is my favorite track just because I’ve had success here,” Almirola said. “I’ve had really good runs here and won my first Truck race here.”

“I’ve run really well in the Cup car here and have had good runs in Nationwide cars here as well,” Almirola said. “For whatever reason when I show up here, I run good.”

“That makes you really like a place,” Almirola continued. “So, I always get excited about coming here because I know I have a shot to run good.”

“I do circle this on my calendar.”

So, what is it that makes Almirola so crazy about the Monster Mile?

“Each turn is different,” the driver of the famed Richard Petty Motorsports No. 43 car said. “It’s crazy but the thing that makes it so special is the sensation of speed is unlike anywhere else we go.”

“There’s a lot of race tracks where we run 200 miles an hour and it doesn’t feel that fast,” Almirola continued. “And here, we only run 170 or so and it feels like we’re going 250 miles per hour.”

“It feels super-fast and it is a challenge to keep your focus,” Almirola said. “The race track will suck you in and that’s why it’s called the Monster.”

“It will bite you,” Almirola continued. “It’s very easy to overdrive this place and be too aggressive.”

Although a challenging track, Dover is also special to Almirola because of what his sponsor does to help those in need. This race weekend, Smithfield and Weis Markets partnered to donate 40,000 pounds of protein to the Maryland Food Bank, which is part of Smithfield’s “Helping Hungry Homes” program

“Smithfield does so much and it’s really important,” Almirola said. “This weekend, they gave 14,000 pounds between pork and bacon and ham.”

“That means a lot to be associated with such a great company and great organization that is willing to take some of the profits they make and give it back to the local communities to help feed people,” Almirola continued. “A lot of us take for granted that we go to bed on a full stomach and not everybody is that fortunate.”

As he looks forward to competing at his favorite track, Almirola admitted that his 2013 season has been going well too, especially in comparison with the previous year.

“We have run really well,” Almirola said. “I’ve been impressed with our improvements, especially over the last year.”

“That is a big testament to what Todd Parrott (crew chief) and all the guys on this team have done, stepping up their game and continuing to produce and give me fast race cars,” Almirola continued. “That’s what it takes at this level to be competitive.”

Almirola also credits his improvement, as well as the team’s, with doing some testing. And although he was not willing to share any of the new things they were trying on the car, he was most enthusiastic about what they were experiencing and looking forward to upcoming tests scheduled prior to season end.

“Doing some of testing, we’ve tried some things out of the box,” Almirola said. “We have a test coming up at Kansas next Thursday and we have a laundry list of things we want to try that we haven’t gotten a chance to try on normal race weekends.”

“We think that may be better or worse but that’s a good opportunity for us to find out,” Almirola continued. “This sport evolves constantly and if you don’t keep up, you get left behind.”

Almirola knows that the spotlight is a bit dimmed on him and his race team since they are not Chase participants. But he is not letting that deter him from achieving the goals that he has set for the remaining few races of 2013.

“Those guys raced for 26 races and put themselves in the position to make the Chase so they deserve to get that attention,” Almirola said. “Then it’s up to us because the only way for us to get the attention back on us is to be really competitive and run good.”

“I don’t race any differently now in the Chase or against the Chase competitors,” Almirola continued. “I race the same because I have just as much at stake as those guys do as far as each and every weekend.”

So, what would be the coup de grace for Almirola this race weekend at Dover?

“We want to get to Victory Lane really bad,” Almirola said. “We’d love to get that 43 car back in Victory Lane.”

“We have great sponsors, with Smithfield Foods, STP and Air Force and we want to get all of those guys to Victory Lane,” Almirola continued. “So, we’re working hard to do that and there have been a lot of late nights at the shop.”

“A win would mean a lot,” Almirola said. “Obviously driving the sport’s most iconic car is really special in itself.”

“But to get to Victory Lane in that car would be an amazing feeling,” Almirola continued. “Richard Petty has won 200 races and he deserves to be in Victory Lane again.”

“He got accustomed and used to being in Victory Lane back then and we want to get him back to Victory Lane and I’d like to bring that win home to him.”