Surprising and Not Surprising: Dover AAA 400 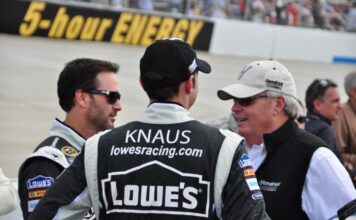 Under picture perfect skies in the Delmarva, here is what was surprising and not surprising in the 44th annual AAA 400 at Dover International Speedway.

Surprising:  Probably the biggest surprise was that the ‘monster’ that usually lurks at the track known as the ‘Monster Mile’ was nowhere to be found.

In fact, at a track where one driver’s misfortune can also collect others in the process, there were but 4 cautions for 21 laps, including 3 cautions for debris and one for fluid on the track from the Blue Deuce of Brad Keselowski.

“I’m not exactly sure what happened but something in the rear end housing went out and burned itself up,” the reigning champ said. “We tried to get off the track as fast as we could with the Miller Lite Ford to not bring out a yellow, but obviously wasn’t quite quick enough.”

“We’re getting all of our bad luck out of the way this year.”

Not Surprising:  When your driver breaks record after record, including surpassing Richard Petty and Bobby Allison for eight wins at Dover, it is not surprising that the crew chief is proud. But Chad Knaus was absolutely effusive when it came time to talk about his driver Jimmie Johnson.

“It’s been an honor to be able to work with Jimmie over the course of the years,” Knaus said. “I think he’s able to pull out some things that are pretty spectacular.”

“He’s able to dig deeper, pull out his cape, make things happen in winning moments of these races that other people cannot do,” Knaus continued. “It’s pretty spectacular.”

“I think Jimmie is probably the most underrated champion we have in this industry,” Knaus said. “He is by far and above the most powerful driver over the course of the last 25, 35 years in this sport.”

Surprising:  Dale Earnhardt Jr. emerged from his second place run at the ‘Monster Mile’ with a renewed confidence and an obvious fire in his belly to get to Victory Lane.

“I feel we’ve been able to really show what our team’s capable of,” the driver of the No. 88 National Guard Chevrolet said. “The changes we’re making, everything seems to be going in the direction you want.”

“We came really close today,” Junior continued. “I don’t feel like today was a highlight for us.”

“I think this is how it’s supposed to be every week.”

Not Surprising:  With his eye out the front windshield, it was not surprising that Joey Logano, who finished third had no idea what happened to his teammate Brad Keselowski. In fact, he did not even want to take the time to find out, adopting his version of a ‘don’t ask, don’t tell’ policy.

“I try not to ask questions,” the driver of the No. 22 Shell Pennzoil Chevrolet said. “I know for me, when I talk on the radio, I slow down a lot.”

Surprising:  In spite of a pit crew swap with RCR-alliance Nationwide team partners, Kurt Busch had issues, again with a loose wheel. The driver of the No. 78 Furniture Row/Denver Mattress Chevrolet finished a disappointing 21st, the second lowest of all of the Chase drivers, losing two Chase positions from seventh to ninth.

“A loose wheel did us in,” Busch said. “Nothing went our way today.”

“This is the Chase and you can’t afford to have these problems,” Busch continued. “We need to regroup and get it together for Kansas next week.”

Not Surprising:   While certainly disappointed to not be in Victory Lane, Kyle Busch was not surprisingly satisfied with his third straight top-five finishes in the Chase to date.

“Certainly, I wish we definitely could have gotten more,” the driver of the No. 18 Interstate Batteries Toyota said. “We were about a fifth to seventh-place car much of the day and we ended up fifth.”

“The Interstate Batteries Camry got what it could out of it.”

Surprising:  As a last minute addition to the Chase, it has been surprising to see Jeff Gordon progress in the way that he has, in fact climbing out of the basement to the fifth place in the standings due to his fourth place finish at Dover.

But even more surprising was the fact that the driver was having such a great time just watching his teammates battle for the win.

“All in all, it was a great day for the Axalta Chevrolet,” Gordon said. “I was having fun.”

“Congrats to Jimmie as he’s so tough here,” Gordon continued. “It was a great job by Junior too.”

“That was fun to watch.”

Not Surprising:  When a driver competing for the championship has mechanical failures, it is not surprising that he becomes one of NASCAR’s biggest losers. But even with that, there is no quit for the driver of the No. 99 Fastenal Ford.

And in this case, Carl Edwards, who experienced a broken left-rear hub, finished the worst of all Chasers in 35th, plummeting from fourth to eleventh in the standings.

“We did not need to have that trouble,” Edwards said. “Something broke in the left-rear, so that’s tough.”

“Overall, we gave it the best effort we could,” Edwards continued. “We don’t quit.”

Surprising:  After convincingly clinching the first two races in the Chase, it was surprising that the driver of the No. 20 Home Depot ‘Let’s Do This’ Toyota pronounced his seventh place finish ‘decent.’

“We kind of missed it today,” Matt Kenseth said. “We got caught with being the last on two tires and restarting on the inside, which was really bad.”

“Still salvaged a respectable finish, but certainly I wanted to do better than that.”

Not Surprising:  Even with his sponsor, 5-Hour Energy, renewing their relationship and in spite of his positive, image-enhancing yoga event for Living Beyond Breast Cancer prior to the race, Clint Bowyer was resoundingly booed by the crowd at the Monster Mile during driver introductions.

The driver of the No. 15 Raspberry5hourEnergyLivingBeyondBreastCancer Toyota finished top ten and moved two positions up in the standings to the eighth spot.

Surprising:  Jamie McMurray followed up his top-five run at New Hampshire Motor Speedway with an eleventh place finish at the Monster Mile. And with that, the driver of the No. 1 Liftmaster Chevrolet pronounced his season ‘pretty good.’

“Yeah, it’s been good,” McMurray said. “I think our cars have been even better than what they were in 2010 when we won some big races.”

“We were able to hit on a few things that has really worked well for us at a variety of different tracks.”

Not Surprising:  With nothing to lose after losing his Chase spot, Martin Truex Jr. was proud of the ‘Hail Mary’ that he and his crew threw at the No. 56 NAPA Shocks Toyota Camry, finishing 15th.

“Chad (Johnston, crew chief) took a real chance with our set up and I am proud of him for it,” Truex Jr. said. “We had nothing to lose and everything to gain.”

“Sometimes you have to think outside the box.”

SM Staff
Previous article
The Final Word – Dover is over, now off to Kansas where Kyle’s dreams go to die
Next article
Travis Pastrana – Kansas Advance