NASCAR BTS: Kevin Hamlin is Calling All the Shots 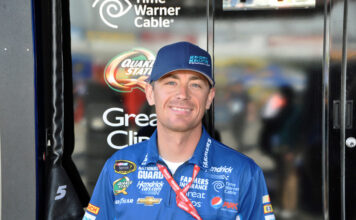 While many in the garage area are busy juggling a multitude of responsibilities, this week’s NASCAR Behind the Scenes (BTS) focuses on Kevin Hamlin, who is calling all the shots from the spotter’s stand to watching over young drivers starting out in their careers.

Hamlin currently spots for NASCAR Sprint Cup driver Kasey Kahne, as well as up and coming drivers Jeb Burton and Brad Sweet. He has also taken over responsibilities for guiding the career of Cole Whitt, who has recently progressed through the ranks to the Cup level.

Hamlin, however, did not start out in these roles until after having his own career as a driver himself, honing his craft in the Pacific Northwest. And for Hamlin, racing indeed has been in his blood.

“It is a family thing,” Hamlin said. “Both my parents drove, so I was born into it.”

“My mom and dad met at a speedway way back when, so I spent my weekends there growing up as a kid,” Hamlin continued. “I raced quarter midgets and then late models and had some success doing that.”

“I won two championships in the NASCAR Northwest Series and then married my high school sweetheart, conned her into moving to North Carolina six months later, and we chased the dream.”

Hamlin continued to pursue his racing career in North Carolina, from an ARCA deal arranged by Brendan Gaughan to a driver development deal with Chip Ganassi Racing. It was then his career took an interesting turn.

“By the time I knew my contract was up and I was doing a lot of start and parks and test driving (I’ve got more laps in a Cup car than I do a Nationwide car or Truck), I decided I wanted to be more involved in a team aspect than race,” Hamlin said. “While I was racing I was also spotting for John Andretti and Travis Kvapil and getting my feet wet at this higher level.”

“That turned into a deal with Clint Bowyer and then Ty Dillon,” Hamlin continued. “And then I went over to Kasey (Kahne) when he was looking for a guy and it has been a good year and a half so far.”

Spotting for Kasey Kahne has led to a whole additional level of calling the shots in his career as Hamlin has developed his relationship with the No. 5 Hendrick Motorsports driver. In fact, he said that the chemistry between them came about almost immediately based on the type of spotting he had done previously for Clint Bowyer.

“I think Clint Bowyer, when I spotted for him, made me into the way I spot now,” Hamlin said. “Clint wanted a lot of information, where other guys are running, where he is getting beat, etc.”

“So, when I did those first few races for Kasey, I just spotted the way I did for Clint and I told him if he needed anything different that we would figure it out as we go,” Hamlin continued. “But he liked what I gave him and it clicked right away.”

“We’ve developed a lingo to where even if I feel like I’m not on my ‘A’ game for whatever reason, he still knows enough the way I do it to know where other cars are around him at all times,” Hamlin said. “Honestly with Kasey it’s been really easy and for whatever reason we hit the ground running.”

Hamlin, like all spotters, has had to learn a different way to call the shots for his driver as a result of what happened at Richmond prior to the Chase. And for Hamlin, life became more complicated but also a bit quieter as well.

“Maybe that’s the way it used to be but the role has really developed into letting the driver know where other guys are at, when they are pitting, and trying to work out strategy,” Hamlin continued. “There was a lot of talking back and forth on the digital radio about what you wanted to do with that.”

“It’s a lot quieter for me now that I don’t have the digital because of what happened in Richmond. “

Thankfully, Hamlin’s worst experience calling the shots was not with current driver Kasey Kahne. But it was so bad, however, that it actually became a You Tube video of how not to react on the spotter’s stand.

“My worst spotting experience was at Bristol with Clint,” Hamlin said. “There was a big wreck getting into (turn) three and I got him through the wreck but stupid me said we’re clear, clear, whew and they were wrecking again right in front of him and Clint ran right into that.”

“So, he chewed me quite heavily for that and guys on the No. 33 team were a rough group back then and they were jabbing me about that too,” Hamlin continued. “I learned until your driver gets with that pace car, your head is still on a swivel trying to watch what is happening.”

“So, that is one of my most memorable not so fun experiences.”

Although spotting for Kahne and others keeps Hamlin very busy, he also is calling the shots in a whole new area of the sport, helping to look after the social and digital properties of several drivers, as well as the careers of several upstarts.

“While I work for Hendrick spotting, my day job is working for Fuel Sports Management group, which is Kasey’s agent and they represent a bunch of different drivers,” Hamlin said. “And I also look after young drivers since I’ve had experience looking out for drivers like the next Kyle Larson.”

“I’m the competition end guy where there are others who are better at the contracts and business aspect,” Hamlin continued. “So, it’s a good little mixture of what we’ve got going.”

“My role there has also progressed into working with Cole Whitt’s day to day stuff.”

“I helped put together the deal with TriStar Motorsports for him and with Swan Racing,” Hamlin said. “So, I’m trying to grow as a day-to-day manager for a Cup driver and trying to learn the business side of the sport as well.”

“As much as I love spotting, am I going to be doing it in fifteen years? I don’t know,” Hamlin continued. “So, you have to have something to do during the week to help support the family.”

“That’s where that new role came in.”

Hamlin is most excited about calling the shots in one other area, that of his family and being with his wife, daughter and son.

“There is a lot going on but it’s nice because if I’m done at three o’clock on Tuesday, I’ll pack up my computer and head home and I can work at home,” Hamlin said. “I have that option so I can see my kids and hang out with my wife and still do that family time thing that is so important.”

“We travel so much that it can really wear on you being away from the family.”

And where would race fans be most surprised to see Hamlin ultimately calling the shots?

“I’m really good at coloring,” Hamlin said with a sly grin. “My daughter Grace, who is five, and my son who is three, like to color.”

“My wife is a stay-at-home mom and works her tail off,” Hamlin continued. “So, for me to just come home and hang out and color is fun.”

“You get me a ‘My Little Pony’ picture and Grace and I can hammer that bad boy out.”

For more information about how Kevin Hamlin is calling the shots behind the scenes or for any expert coloring advice, follow him on Twitter @KevinHamlin.

SM Staff
Previous articleIn the Midst of the Boredom, a Race Broke Out
Next articleMy Chase Predictions With Five Races Remaining