Surprising and Not Surprising: AAA Texas 500 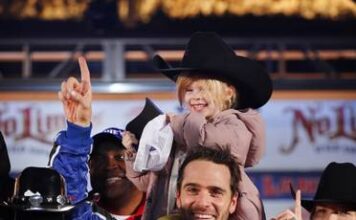 As the race for the six shooters and black cowboy hat moved from afternoon into evening, here is what was surprising and not surprising in the ninth annual AAA Texas 500 at Texas Motor Speedway.

Surprising:  Although no one could argue about the strength of Jimmie Johnson’s performance and victory at Texas, when it came time to discuss the Chase and the battle with Matt Kenseth, now seven points behind Johnson, there were some fighting words involved.

“I have been watching a lot of MMA (Mixed Martial Arts) fighting lately, and you’ll fall into a rhythm and think that somebody has got the fight won, and it doesn’t end that way,” Johnson said. “That’s how this is going to be.”

“Matt didn’t have maybe the best day and still finished fourth,” Johnson continued. “This thing is going to go to the last lap at Homestead.”

“I think this is just going to be a dog fight there,” Rick Hendrick, Johnson’s team owner, said. “I think it’s going to be the last lap at Homestead because the teams are that close.”

“It’s going to be a war,” Coach Joe Gibbs, Kenseth’s team owner, said. “And I just hope we all survive.”

Not Surprising:  Dale Earnhardt Jr. acknowledged Jimmie Johnson’s dominance best, telling his crew chief Steve Letarte that his car won even though he finished second for the third time to his five-time champion teammate.

“He (Johnson) was in a class of his own,” Dale Junior said. “We were joking that he won the DP but we were first in the GT class.”

“They were super-fast and I was super, super impressed with those guys’ car,” Earnhardt Jr. continued. “I’m happy to have a good effort and looking forward to the last couple of races.”

“Hopefully we will get us a win,” Junior said. “We keep getting close.”

Surprising:  Carl Edwards, driver of the No. 99 Aflac Ford Fusion, went from hero, sitting on the pole, to zero, getting knocked out of the race at Texas due to engine failure. Yet even in his disappointment, Edwards surprisingly was still able to pull off a plug for his erstwhile sponsor.

“I think a valve spring broke,” Edwards said. “We don’t usually have a lot of engine trouble.”

“We had such a great weekend going,” Edwards continued. “Aflac has coverage for just about everything but I don’t think they cover sick engines which is too bad.”

Edwards was not the only one with a sick engine as Ford mate David Ragan also lost one, as did Timmy Hill and Bobby Labonte.

Not Surprising:  While speeding penalties are costly enough to the average driver, they were especially costly to two of the Chase competitors, particularly Matt Kenseth, whose penalty no doubt cost him the point’s lead, and Kyle Busch, who battled not only the speeding penalty but also an early crash to finish 13th.

“We were just being too aggressive,” Kenseth said. “That speeding penalty got us behind — we definitely didn’t need that.”

“If I wouldn’t have messed up, maybe we could have ran second.”

“Kyle (Busch) feels horrible because he sped on pit road late in the race,” Dave Rogers, crew chief of the No. 18 Snickers Toyota, said. “He was giving us all he had to give us the best possible finish and we took a little bit more that what was there.”

“This is a team and we’ve got his back.”

Surprising:  While Texas provided a surprising venue to showcase the strength of Penske Racing, with two top-ten finishes, both drivers, however, acknowledged that neither of them had what it took to be stronger than team 48.

“From the start of the race, we moved our way forward,” Joey Logano, driver of the No. 22 AAA Ford said. “Overall we can’t be disappointed with a third place finish but the 48 car was just ridiculously fast.”

“I thought we had decent speed,” Brad Keselowski, driver of the No. 2 Miller Lite Ford, said. “We were leading at one point and the yellow flag came and we pitted and came out ninth, which ended our shot of being able to derail Jimmie if there even was one.”

“His car was so much faster than the field,” Keselowski continued. “It was pretty embarrassing to be quite honest.”

Not Surprising:  The pattern of inconsistency for team No. 24 and driver Jeff Gordon continued, with the win at Martinsville last weekend being negated by the hard hit into the wall after a tire went down at Texas.

“I hit the wall hard,” Gordon said “I just know the left front went down as I was going down the front straightaway.”

Gordon finished 38th, close to 200 laps down, his worst finish since Watkins Glen.

“Although 18th doesn’t sound that great, for a rookie and this team, it’s a great finish and it’s one of the best finishes for these guys,” Kligerman said. “It was a long tough race but the team persevered and everyone fought hard.”

Not Surprising:  Since Greg Biffle never, ever forgets, his love tap of Jimmie Johnson in the waning laps of the Texas race was not the least bit surprising. It did not, however, help him to feel at all better even though he finished twelfth in the race when the checkered flag flew.

“We didn’t get it until it seemed like about 20 to go or whatever that last stop was,” Biffle continued. “We just weren’t where we wanted to be.”

Surprising:  While most, if not all eyes were on the Chase race between Johnson and Kenseth, there were other drivers in the field who literally paid no heed as they were marching to the beat of their own drummers.

“We actually made a lot of gains throughout the weekend,” Danica Patrick, drive of the No. 10 GoDaddy Chevrolet said after finishing 25th. “We never quite got it, but we certainly made progress.”

“I’m excited to get to Phoenix next week,” Patrick continued. “GoDaddy is based out there, so it’s a big race for us.”

With her 25th place finish, Patrick also gained three spots in the point standings to 25th as well.

Not Surprising:  Problems continued on and off the track for Juan Pablo Montoya as he winds up his NASCAR career and prepares to return to the IndyCar Series.

Montoya brought out one of the few race cautions on track due to a tire issue, which was a shredded right front tire according to Crew Chief Chris ‘Shine’ Heroy. JPM was able to soldier on to finish in the 20th place at Texas Motor Speedway.

But off track, Montoya also has problems as Forbes reported that he is in trouble with the US taxman. The IRS is alleging that the driver owes $2.7 million in additional taxes and penalties due to some interesting and complicated deductions, many of which were made prior to his coming to NASCAR and to the United States to live with his family.

Montoya has just two more races in the NASCAR Series and then will return to IndyCar racing but this time to drive for Roger Penske and serve as teammate to Penske driver Helio Castroneves.

Surprising:  After a challenging season of his own, Kasey Kahne actually surprised himself with a top-five finish at Texas Motor Speedway.

“We had a pretty good Time Warner Chevy today,” Kahne said. “We were seventh to tenth most of the race and we worked our way to fifth there at the end.”

“I’m glad we were able to have kind of a flawless race and race all day and make a little bit of ground up at the end.”

Not Surprising:  Kurt Busch’s quest to finish off his season with Furniture Row Racing with outstanding performances is proving most difficult.

“Nothing good to say about this race,” Busch, driver of the No. 78 Furniture Row/Denver Mattress Chevrolet said. “That’s all we had and it was a struggle all weekend.”

“We definitely need a turnaround in the final two races because it has been too good of a year to end on a struggling note.”