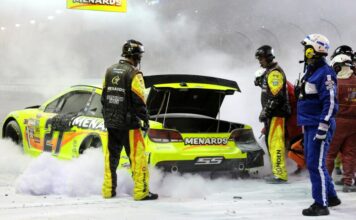 With the crowning of just one last champion to join Matt Crafton, Truck Series Champion, and Austin Dillon, Nationwide Series Champion, here is what was surprising and not surprising in the final race of the season, the Ford EcoBoost 400, at Florida’s Homestead-Miami Speedway.

Surprising:  For someone used to winning championships, especially after his sixth, Jimmie Johnson was surprisingly emotional in Victory Lane, especially as he remembered his grandmother who had passed away and when he saw his wife and daughter Genevieve appear to congratulate him.

“I know there was an angel, at least one, but maybe four angles riding on this car,” the driver of the No. 48 Lowe’s Chevrolet said. “My Grandmother passed away a month or so ago, and I am without grandparents now which is a sad thing.”

“She was my biggest fan.”

Johnson became most emotional when he talked about his wife and mother of his two children Chandra.

“She is the strongest woman on the planet,” Johnson said. “She makes me who I am, and makes me a better man.”

“She does a fantastic job raising these kids and keeping me in line; I am her third kid,” Johnson continued. “I am so thankful to have her as wife.”

“We are going to have a lot of fun and enjoy this moment.”

Johnson finished the Homestead race in the ninth position, which put him 19 points ahead of Kenseth for the Sprint Cup championship. This was the 11th championship for Hendrick Motorsports and makes Johnson only one of three competitors, including Richard Petty and Dale Earnhardt, to win six or more championships.

Not Surprising:  There were at least two drivers, the second and third place finishers at Homestead-Miami Speedway, that along with many fans have one simple wish – that the season would not end.

“For me, when you’re running good, you kind of don’t want the season to end in a way,” Matt Kenseth, runner up in the last race and in the championship, said. “You want to keep going to the track.”

“To me as I get older, the seasons go faster and faster honestly,” Kenseth, driver of the No. 20 Dollar General Toyota, continued. “It was more fun this season so in a way, you don’t want it to end.”

“Ever since I started working with Steve (Letarte, crew chief) and that whole team, I hadn’t wanted the year to end,” the driver of the No. 88 National Guard Chevrolet said. “We seem to get better as the season goes.”

“You would just love to go to another race next week.”

Surprising:  After a surprisingly tough season of injury, recovery and struggles, Denny Hamlin, driver of the No. 11 FedEx Express Toyota, scored his first victory in the last race of the year. This was Hamlin’s second win in nine races at Homestead-Miami Speedway.

“It was just an amazing drive,” Hamlin said. “Just proud of Darian (Grubb, crew chief) and this whole team for giving me a race-winning car.”

“It just gives us huge momentum,” Hamlin continued. “We started kicking things into gear about two months ago and then last week with a horrific effort and that kind of gets your spirits down, but then to come here to Miami and back it up with a win — this is something we can think about for the entire winter.”

Not Surprising:  The reigning champ of 2012, Brad Keselowski, was the highest finishing Ford, bringing the Blue Deuce to the checkered flag in the sixth position.

“We definitely had the car on the short runs, but just weren’t close on the long runs,” Keselowski said of his last race of the season. “If we could have got the long run speed to go with the short run speed, we would have killed them tonight, but we just didn’t have that.”

Even with a solid top-ten finish, Keselowski could not help but reflect on the championship year that ended when Jimmie Johnson hoisted the champion’s trophy.

“A champion is forever,” Keselowski said thoughtfully. “It might not be reining, but you’re still a champion forever.”

“I think Martinsville brought a lot of things to a head and we were able to talk about a lot of things,” Harvick said of the controversy between him and Childress. “Really this was the way I would want to leave with everybody shaking hands and happy that we have been together and been successful together.”

“I can’t wait for our first hunt together as friends,” Harvick continued. “That will be good times.”

Harvick, in his last race with the ‘ole two niner’ finished tenth at Homestead and third in the championship points, 34 points behind six-time winner Jimmie Johnson.

Not Surprising:   In his first year with Penske Racing and with an eighth place finish in the No. 22 Shell/Pennzoil Ford at Homestead, Joey Logano pronounced his year good.

“I had a lot of fun this year and this was my best season personally,” Logano continued. “We’ve got areas we need to improve and we’ll do it.”

Logano also had a significant moment off the track to top off the 2013 season as he got engaged as well.

Surprising:  One of the most surprising moments of the race occurred when Paul Menard, who had sustained damage during a wild restart, came to pit road in flames. The right rear tire then exploded sending parts and pieces flying throughout pit road.

Thankfully no one, including the driver of the No. 27 MOEN/Menards Chevrolet, was injured. Menard, who at times was in the top-five running order, finished 39th.

“That was pretty wild,” Menard said. “We were having a great day.”

“On that restart, everybody kind of checked up and we got some right rear damage and had a flat tire,” Menard continued. “I guess a bunch of rubber got wrapped up underneath around the axle I guess.”

“Came in a couple of times trying to fix the damage and try to get the rubber off,” Menard said. “We didn’t get it all and I guess it just caught fire.”

“I didn’t really know it until there was a little bit of spark coming in the car and landed on the window net, thought that was kind of weird,” Menard continued. “About a lap later they said I was on fire; I lost my brakes, then the damn wheel blew right off (the car).”

Not Surprising:  Even four-time champions can make a mistake or two and Jeff Gordon did just that, spinning his wheels on a restart, with almost catastrophic results for at least one of the championship contenders.

“Yeah, I was trying to get some momentum and he (Denny Hamlin) checked up and it just messed the whole thing up and I got wheel spin,” Gordon said. “That is the second time this year I have done that right in front of Matt (Kenseth) and he has drove right into the back of me and about wrecked us both.”

“The last thing I would want to do in front of Matt is that, but you can’t run into the guy you know,” Gordon continued. “It was a bad unfortunate situation and it just trickles on back from there.”

“It could have been even worse.”

Surprising:  Danica Patrick had a surprisingly good run for the last race of the season and in fact was the highest finishing rookie in 20th. This was Patrick’s eighth top-20 of her rookie 2013 season.

“It’s one thing to have the yellow stripe on the car,” Patrick said. “It’s another thing with all the things being a rookie signifies, which a lot is, ‘I don’t know what I’m doing.’

So I think that’s what I’m most pleased about is, now I’ve done the whole season, I’ve gone to every track and learned a lot about a lot of things — not just cars but about the team — and it just makes me more prepared for the future.”

Not Surprising:  Even with Patrick finishing ahead of him, boyfriend Ricky Stenhouse Jr. still scored the 2013 NASCAR Sprint Cup Series Rookie of the Year honors.

“It means a lot, looking at all the other names that have won this award,” Stenhouse Jr. said. “It definitely wasn’t the season that we wanted, but we slowly but surely got better throughout the season.”

“I was proud of what we did throughout the season, of getting better, qualifying better, having runs up front, and leading laps throughout the year,” the driver of the No. 17 Ford EcoBoost Ford said. “Thought we had a chance at winning some races there, at least being in contention.”

“I was proud of those moments.”

This concludes the Surprising and Not Surprising column for the 2013 season. Thanks for all the reads and comments, have a great holiday season, and cheers to an exciting 2014 season, coming in just 100 days at Daytona!