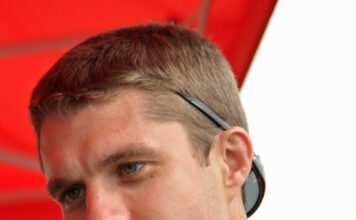 For David Ragan, 2014 is set to be a year full of milestones, from his 100th Nationwide start to his impending fatherhood, with baby Ragan set to arrive this summer.

But as is the case for most racers, Ragan is just happy to be back at the track, even if only for some preseason testing in the Nationwide Series.

“I’m excited for the Daytona Nationwide race,” Ragan said. “I will be racing with the Biagi-DenBeste Racing team.”

“I wanted to run a few Nationwide races to get back in the rhythm of running up front and having some fun in the Nationwide Series,” Ragan continued. “It’s something that I really haven’t had an opportunity to do in the last year or so.”

“I didn’t even realize it would be my 100th start so that was kind of interesting as well,” Ragan said. “It’s something that as the years go on, you look back and say, ‘Man it did go by pretty fast.’

“But definitely the 100th start will be fun to make at Daytona, which is special to me.”

Ragan will be behind the wheel of the No. 98 Curb Records Ford for his milestone start in the DRIVE4COPD 300, scheduled for February 22nd.

“The Nationwide team has built a really nice car,” Ragan said. “We tested down in Dayton for a couple days and thought the car had a lot of speed.”

“We have won a couple of races, a few poles and I certainly want to add another notch in the win column,” Ragan continued. “That would be cool to do in your 100th milestone start.”

Another milestone that Ragan is hoping to achieve is being able to compete in even more Nationwide Series races with this Biagi-DenBeste Racing team.

“We are working hard to attract a few more sponsors to run a few more races,” Ragan said. “This is the kind of team that doesn’t run a tremendous number of races so they can do it a little cheaper than a full-time team.”

“It’s fun and a great opportunity with a Ford Mustang to get back into the Nationwide Series,” Ragan continued. “So, I’m looking forward to hopefully running a few more races with this team.”

While Ragan is looking forward to achieving more milestones at Daytona in the Nationwide Series, he acknowledges that he will have a few challenges to face getting back into that seat. And while he enjoys racing at Daytona, the track has also presented some challenges along the way.

“I enjoy plate racing,” Ragan said. “I didn’t enjoy it the first year or two but I got to learn how to do it well.”

“But Daytona has been a tough track for me,” Ragan continued. “I think I’ve wrecked the last three or four races there.”

Several of the other challenges that Ragan will face in his milestone return to the Nationwide Series is the new ‘no tandem racing’ rule, as well as all the new, fresh rookie faces in the garage area.

“I don’t think that NASCAR will even have a chance to police that no tandem rule because of the configuration of the air intake and the radiator package,” Ragan said. “It’s very similar to the Cup Series so the temperatures will be so high that you won’t be able to even attempt to tandem race.”

“It is just one of those things that NASCAR is adjusting the rules on a bit that I don’t think they’ll have an opportunity to enforce because we can police it ourselves.”

“Also, I’m trying to get to know some of the new guys out there that I’m racing with,” Ragan said. “That’s why it was important to go and do the test.

“A lot of the Nationwide guys I know and know of but I haven’t had the opportunity to race with them,” Ragan continued. “I think it’s important to get to talk to them and let them see me in the car so they recognize who is driving it.”

“That will pay big dividends when we are out there racing for sure.”

Ragan is also looking forward to achieving new milestones on the Cup side of his career, especially being back in partnership for another year with Front Row Motorsports teammate David Gilliland.

“Front Row Motorsports has improved year in and year out since I’ve started there in 2012,” Ragan said. “We’ve got a lot of potential now.”

“Some of our primary sponsors are coming back and we’re excited about that,” Ragan continued. “We’ve worked on our car inventory this off-season and we’ve certainly improved our team.”

“We’re excited to get to Daytona, but really excited to get to Phoenix, Las Vegas, Bristol and see where we shake out in those first few races,” Ragan continued. “I’m looking forward to my third year and having some fun with my team.”

“And if we could slightly improve on our Cup efforts, continue to build relationships with our sponsors and it has a lot of potential to be a milestone year.”

Ragan’s final, and most important, milestone in 2014 is more personal. He and his wife Jacquelyn are expecting a new addition to the Ragan clan.

“We are also having a milestone personally as Jacquelyn, my wife, is pregnant and due in June,” Ragan said. “So, this is going to be a big year off the race track.”

“It’s going to be a fun time but a very busy time,” Ragan said. “But we’re excited and ready to get the year underway.”