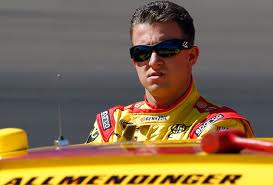 The final stop on the Sprint Media Tour presented by Charlotte Motor Speedway was a double stop with JTG Daugherty Racing and Leavine Family Racing. These two smaller teams are trying to make inroads in the Sprint Cup Series and have high hopes for 2014.

JTG Daugherty is facing many changes in the new year, but leaving Toyota and aligning with Richard Childress Racing and Chevrolet gives the new team new hope. Co-owner Brad Daugherty was extremely pleased with the results of their Daytona test.

“I watched that 195 mph lap at Daytona and I knew things would be better,” Daugherty said. “Not criticizing any of our former partners, but we struggled last year. We had no direction. With RCR equipment, we’re on the right track. We’ve scanned the cars they’ve sent us and are building identical cars in-house. We feel like we have the tools to do what we can to be competitive. Bobby Labonte drove his guts out last year and the result just wasn’t there.”

Daugherty also spoke about signing Allmendinger to drive for the team in 2014.

“I talked to Roger Penske about (Allmendinger), and I told him I wanted to offer him a full time Cup Ride. Roger said, ‘I can live with that,’ and that was that. We feel we have the driver to win races and challenge for the championship.”

Leavine Family Racing will go to war with Michael McDowell as its driver in 2014. The talented McDowell will drive their cars in the Sprint Cup Series in 2014, as he moves over from Phil Parsons Racing, in Ford Fusions with motors from Roush-Yates power.

Ron Fleshmanhttp://www.ris-news.com
Ron Fleshman has followed NASCAR racing since attending his first race at Martinsville Speedway in 1964. He joined the Motor Sports Forum on the CompuServe network in the 1980s and became a reporter for Racing Information Systems in 1994. In 2002, he was named NASCAR Editor for RIS when it appeared on the World Wide Web as www.motorsportsforum.com. He can now be found at www.ris-news.com. Ron is a member of the American Auto Racing Writers and Broadcasters Association. You can find Ron following and reporting on the top three NASCAR divisions each week. As a lifer in his support of racing, he attends and reports on nearly 30 events a year and as a member of the motor sports media, his passion has been racing for 47 years. He lives with his family in rural West Virginia and works in the insurance industry when not on the road to another track.
Previous article
Sprint Media Tour Day One – Stewart-Haas Racing
Next article
INDYCAR NEWS AND NOTES – Jan. 27, 2014