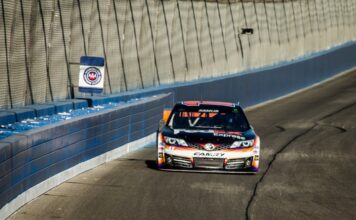 Denny Hamlin had an eventful final corner at Auto Club Speedway last season, to say the least. Hamlin and Joey Logano – who had a dispute the week before at Bristol – battled the entire white flag lap for the win, but eventually touched, putting Hamlin into the inside wall, Logano into the outside wall, and sending Kyle Busch to victory lane.

However, not snatching his first career Auto Club victory wasn’t the major setback for Hamlin. It was the fact the wreck caused him to suffer a back injury, forcing him to sit out of the car for around a month.

Now, a year later, Hamlin is looking for revenge in Fontana, California. And after qualifying 13th it seems he has the capability to convert.

Despite Hamlin wanting to score the victory this weekend, he doesn’t intend on holding a grudge with Logano, even though his season was destroyed by him last year.

“Really worrying about retaliating and holding grudges and things like that takes away from the time you need to be preparing for the upcoming event,” Hamlin explained in the media center on Friday. “When you’re on the track, it’s hard enough to pass in these cars, so you have to concentrate in these cars at all times and not (on), Hey I need to get to this guy or that guy to retaliate.”

With retaliation off his mind, Hamlin has his complete focus on winning this weekend, and he’s confident he can.

“We (Joe Gibbs Racing) look forward to coming here and running extremely well. We had a pretty good first practice, so we’re starting off on the right foot,” Hamlin expressed. “I’ve taken this race and circled it as one where you really would like to get a win and obviously be competitive when it comes Sunday. It’s nice to, instead of retaliating, to end in victory lane.”

Setting all redemption and retaliation aside, Hamlin is still trying to secure a spot in the Chase with a victory. He finished second in the Daytona 500, 19th at Phoenix International Raceway, 12th at Las Vegas Motor Speedway and sixth last weekend in Bristol, Tennessee. Therefore, after an average start to 2014, he’s hoping to solidify himself as a championship contender this weekend.