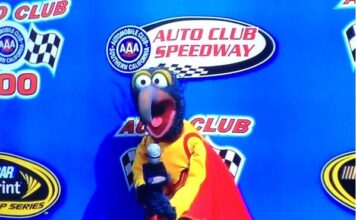 From the unique race command from Muppet star Gonzo to Denny Hamlin’s pre-race trip to the hospital for a sinus infection and vision problems, here is what else was surprising and not surprising from the Auto Club 400 in Fontana, California.

Surprising:  There are not many drivers who, after winning a thrilling race in green-white-checkered fashion, can combine ‘Days of Thunder’ with faith-filled references right out of ‘Talladega Nights’. But Kyle Busch surprisingly managed to pull it all together in his Victory Lane remarks.

“Man oh man.  The first thing that comes to mind when the caution came out with just a few laps to go — that was total Rowdy Burns ‘Days of Thunder’ right there,” the driver of the No. 18 No. 18 Interstate Batteries Toyota Camry said. “There’s a couple laps to go — I’m not pitting.”

“Everybody has to pit, Cole (Trickle), we’re coming down for four tires because there’s a green-white-checkered coming,” Busch continued. “I knew four tires was going to win the race, so I’m glad Dave (Rogers, crew chief) called that.”

“I was able to keep Kyle Larson behind me. Man, what a shoe that boy is,” Busch continued. “If he drove it in further than I did, Jesus must have told him to stop.”

“I just can’t believe it.  I thank the Lord for putting ourselves here and getting us locked in the Chase.”

This was Busch’s 29th win in 334 Cup races but his first victory of the 2014 season. This was his third victory and 12th top-10 finish at Auto Club Speedway.

Not Surprising:  What double file restarts and shortening up the length of the race has done for Pocono Raceway, the rough, aged racing surface with multiple grooves and huge bumps has done the same, if not more, for Auto Club Speedway.

In fact, it seemed like just a few years ago when the track was criticized for boring racing and the grandstands were empty. This Cup race yielded some of the most exciting racing to date, with six and seven cars abreast, in front of a packed house, most of whom barely sat down for the entirety of the show.

Surprising:  Kyle Larson went from thinking he was pretty much going to have a tough day to finishing as the highest running rookie, in P2 no less. This stellar finish came on the heels of his Nationwide victory over none other than Cup race winner Kyle Busch.

“I thought we were in trouble or not be able to get to the front,” the driver of the No. 42 said after the race. “I don’t know where everybody went on that last restart.”

“It went through my mind then that I might sweep the weekend,” Larson continued. “That last run, we got good enough to charge to the front. What a weekend.”

Not Surprising:  Sam Hornish’s new mantra should be ‘have helmet, will drive.’ Originally, the currently unspoken for driver was on standby to drive for Matt Kenseth in the event that his wife Katie went into labor with their third child.

In the end, however, Hornish ended up substitute driving for Denny Hamlin, finishing a respectable 17th in the No. 11 FedEx Express Toyota. This was his best finish since his 13th place run in 2012 at Martinsville.

Surprising:  The normally cool, calm and collected Aric Almirola, driver of the No. 43 Farmland Ford Fusion, had some surprisingly harsh words for competitor No 33 car driver Brian Scott after their accident brought out the fourth caution of the race.

“The 33 was obviously a dart without feathers and coming across the race track,” Almirola said. “Man, he came from all the way at the bottom of the race track and ran into me.”

“He’s not even racing this series for points,” Almirola continued. “He’s out there having fun because his daddy gets to pay for it and he wrecked us.”

Not Surprising:  After tires blew out in practice as well as the race, the debate not surprisingly was on as far as what exactly led to so many tire issues, especially in the left rear.

Brad Keselowski, a driver that suffered particular tire problems in practice and the race, weighed in after the race to share his perspective.

“There were a lot of reasons why we blew a tire today or two or five over the weekend and the field did,’’ Keselowski said after finishing 26th. “I don’t know what to really say about it. As a driver you are left between the choice of driving your car to the limit and blowing a tire out or being a wuss and saving it.”

NASCAR’s most popular driver weighed in with a whole different take on the tire situation.

“I don’t think there is anything wrong with the tire OR the way we choose 2 use them,” Dale Earnhardt Jr. tweeted after the race. “My bet is it’s the bumps on the backstretch.”

NASCAR representative Vice President for Competition Robin Pemberton shared the more official perspective, saying that some teams were running tires with air pressures as low as 14 pounds, whereas Goodyear had commended tire pressures at 22 pounds for the race weekend.

And finally, Goodyear, echoing Pemberton’s assessment, advised that the problems were not tire-related but more team-related due to the very aggressive set ups.

“Every left-side tire that we’ve seen gone down or had issues with is kind of the same characteristics as (Saturday),’’ Greg Stucker, Director of Race Tire Sales for Goodyear, said.  “The common denominator being aggressive on air pressure.”

“You’re in race conditions, so everybody is running a little bit harder.”

Surprising:  For the second straight race, NASCAR official human error came into play. This weekend, a NASCAR official actually got his uniform stuck in the fence and he literally could not move to flip the pit road light switch to green.

Because of this error, Brad Keselowski, Jeff Gordon and Clint Bowyer did not pit because there was a red light instead of a green light.

All three drivers went on to suffer less than ideal finishes, with Jeff Gordon finishing the best of the bunch in 13th, Bowyer in 16th and Keselowski in 26th.

“We can’t seem to catch a break,” Bowyer said. “We lead for a while, we came back after confusion with the lights on pit road and were in contention to win at the end.”

“However, we started feeling a vibration with about four to go and it just didn’t make it,” Bowyer continued. “It just stinks for this team.”

Not Surprising:   Bosses sometimes do influence the workplace even at the track. One of NASCAR’s most notable bosses, team owner Rick Hendrick, played the encourager role with driver Jeff Gordon, who started from the back not once but twice, passing at least 70 plus cars.

Kurt Busch, who finished third, was also quite emotional about racing with his boss Tony Stewart. “The amount of emotions running well today and we were face and then to race your boss for the win,” Busch said. “Neither one of us got the win but it was a genuine moment for us to race.”

The Cup Series heads next to Martinsville Speedway for the STP 500.