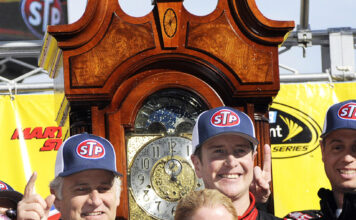 1. Dale Earnhardt, Jr.: After two straight races outside the top 20, Earnhardt finished third at Martinsville and reclaimed the lead in the Sprint Cup points standings. He leads Matt Kenseth by nine.

“I’m thinking about taking Graham Rahal’s Indy car for a spin,” Earnhardt said. “I doubt Junior Nation cares too much about seeing me in an Indy car. They don’t care about open wheels, just open containers.”

2. Jimmie Johnson: Johnson led 296 laps at Martinsville, but couldn’t hold off Kurt Busch down the stretch. Busch took the lead with ten laps to go and Johnson took second. Although winless on the year, Johnson is fifth in the points standings, 18 out of first.

“With eight wins at Martinsville,” Johnson said, “I’m practically a sure thing. Ironically, ‘automatic’ lost out to ‘automation,’ that being the No. 41 car sponsored by Haas Automation. I couldn’t hold Busch off. I drove the wheels off the No. 48 Lowe’s car. Kurt drove the hood off the No. 2 Miller Lite car.”

3. Carl Edwards: Edwards finished 13th at Martinsville, leading the way on a disappointing day for Roush Fenway Racing. He is third in the points standings, 10 out of first.

“Brad Keselowski and Kurt Busch had quite a battle,” Edwards said. “They exchanged sheet metal, insults, and fingers. And speaking of ‘birds,’ the No. 99 car with the Aflac duck on it should be one of the favorites at the Duck Commander 500 at Texas. If we win, you could call it the ‘Duck Commandeer 500.”

4. Matt Kenseth: Kenseth posted his fourth top-10 finish of the year with a sixth in the STP 500. He moved up three places to second in the points standings, and trails Dale Earnhardt, Jr. by nine.

“Denny Hamlin had some metal removed from his eye,” Kenseth said. “And that calls for some ‘cornea’ jokes. I think it was glass. That may explain the ‘Who shard-ed?’ buttons that the No. 11 team wore at Martinsville. Many are questioning Denny’s character, accusing him of only caring about himself. Well, let me tell you, Denny’s passed the ‘eye’ test, and he’s passed the ‘me’ test.”

5. Brad Keselowski: Keselowski’s No. 2 Miller Lite car suffered major damage early when Kurt Busch plowed into it as Keselowski was trying to leave the pits. With his front end wrecked, Keselowski finished 38th, 31 laps down, and fell three places in the points standings.

“Kurt won a grandfather clock for his win,” Keselowski said. “And trust me, his time is coming. When I see him next, there will be one hand on his nose, and one hand on his mouth.”

6. Joey Logano: Logano continued his strong year with a fourth at Martinsville, aided by a solid qualifying run of third. He is seventh in the points standings, 40 behind Dale Earnhardt, Jr.

“I doubt we’ve heard the last of the Brad Keselowski-Kurt Busch incident,” Logano said. “Brad’s angry. Kurt’s just as angry, if not angrier. How can you tell? Because he’s got his ears pinned back.”

7. Jeff Gordon: Gordon suffered front-end damage early at Martinsville and struggled the rest of the way, yet managed a 12th-place finish. He is fourth in the Sprint Cup points standings, 11 out of first.

“Texas is next on the agenda,” Gordon said. “They’re calling it the ‘Duck Commander 500’ in honor of Duck Dynasty. Robertson family patriarch Phil Robertson is set to wave the green flag. However, there’s no chance in hell he’ll be waving the ‘P-Flag.’”

8. Kyle Busch: Busch started on the pole at Martinsville and led some early laps before handling issues stifled his efforts. He eventually finished 14th and is now sixth in the points standings, 38 out of first.

“Congratulations to my brother Kurt,” Kyle said. “That was an impressive win. He held off Martinsville master Jimmie Johnson. This pasty white boy’s not hip to the current street lingo, but this seemed to be a case of ‘Bro’s Before Lowe’s.’”

9. Kurt Busch: Busch bounced back from early contact with Brad Keselowski to pass Jimmie Johnson with ten laps to go, and won the STP 500 at Martinsville.

“Unlike some drivers who are expecting children,” Busch said, “I don’t have a baby on the way. But there was a ‘baby’ in the way. I’m sure Brad will say I haven’t heard the last of me. That’s okay, because he has heard the ‘first’ of me.

“Kyle started in the lead, and I finished with the lead. That’s great publicity for Sprint’s new cell phone plan. But neither of us has any friends, so it’s not the ‘Framily’ plan, it’s just the ‘Family’ plan.”

10. Austin Dillon: Dillon posted a solid 15th in the STP 500, the top finish among rookies at Martinsville. He is ninth in the points standings, 48 out of first.

“I really wish I could have won the race,” Dillon said. “Then I would have a grandfather clock to go with my grandfather. Without Richard Childress, I doubt I would be in a Sprint Cup car right now. He’s no clock, but he tells me when it’s ‘time.’”