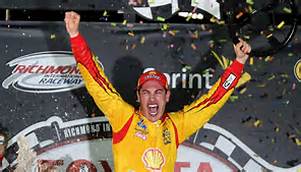 At the track which made Chase-altering headlines the last time the Cup Series came to town, here is what was surprising and not surprising in the 60th annual Toyota Owners 400 at Richmond International Raceway.

Surprising: While another racer with two wins has most often been known by this moniker, crew chief Todd Gordon dubbed his own winning driver Joey Logano ‘The Closer’ instead. Not only did Logano close the deal on his first win at Richmond but also closed on a Chase berth with his second win of the 2014 season.

“Joey does a really good job closing,” Todd Gordon, crew chief, said in the media center after the race. “I think that’s one thing that’s impressed me in the last year and a little bit.”

“I knew we had a shot at the win and it all kind of lined up for us.”

“We kind of thought with one win you’re going to be all but locked in, but this really secures you,” the closing 23 year old driver of the No. 22 Team Penske Shell Pennzoil Ford said. “Having a couple wins this early in the season and in two completely different racetracks makes you very confident for the rest of the season.”

Not Surprising: While Joey Logano punched his card to the Chase, both Marcos Ambrose and Casey Mears punched their tickets for NASCAR’s further review of the punches thrown in the pits at the conclusion of the race.

In fact, the normally good natured Aussie landed such a punch that Mears acknowledged he was still smarting from the day after the race.

“He got me good,” Mears said of Ambrose’s punch. “That’s one thing I can say that out of all the NASCAR fights or punches or when you see people swing, usually it’s a lot of fly-swatting.”

“But he actually connected.”

What was even more surprising is that those tire to fire issues happened four consecutive times right around lap 60 on tires.

One of the most dramatic tire to fire episodes impacted Reed Sorenson, driver of the No. 36 Tommy Baldwin Racing Chevrolet, who was pulled out of his burning car by a NASCAR official and a crew member from the No. 5 Kasey Kahne team.

“Seems like the rubber got to the oil lines and the brake lines and that was what was burning was the oil and the fuel,” Sorenson said. “So I got out of there as quick as I could and to try and not inhale all that smoke.”

“Definitely not what you want to be inside of.”

Not Surprising: While Jeff Gordon remained the point’s leader, currently five points ahead of Matt Kenseth, both drivers expressed the same feelings as far as prioritizing wins over position in the point standings.

“You’re right, I mean, normally I’d be ecstatic with leading the points and where we’re at and consistency, but right now those wins are just so important,” the driver of the No. 24 Drive to End Hunger Chevrolet said. “I mean, I’d rather be 12th in points right now with three wins than be leading the points.”

The driver of the No. 20 Home Depot Husky Toyota echoed Gordon’s sentiments.

“I’m disappointed I didn’t get the win,” Kenseth said. “I did everything I could do.”

“I was trying to win the race and at the end of the day I just didn’t get it done.”

Surprising: Some of the drivers with the highest driver ratings at Richmond International Raceway struggled the most mightily at the short track.

Denny Hamlin, who had the highest driver rating of 114.8 coming into the race, had an abysmal finish of 22nd after spinning out and being narrowly missed by many in the field.

Tony Stewart, who came to the race with a driver rating of 96.5, the fifth best, also struggled, finishing 25th, one lap down.

Two of the other drivers with good driver ratings, Kurt Busch in seventh and Jimmie Johnson in tenth, also had difficult nights finishing 23rd and 32nd respectively.

“We struggled tonight in the Haas Automation Chevrolet,” Busch said. “The car was loose in, tight in the center and loose off for most of the night.”

“Really thought we had a decent car and was going to run in the top-five, top 10 at the worst,” Johnson said. “Then we had one run where we cut a right-front and the next run another right-front.”

“That really just kind of put an end to our night.”

Not Surprising: Martin Truex, Jr. finally tamed the bad racing luck demons with his best result of the season, tenth, in his No. 78 Furniture Row/Denver Mattress Chevrolet.

“We finally finished one!” Truex said after the race. “Nothing fell out of the sky and hit us. We kept the air in the tires all night.”

“The biggest thing is finally shaking the bad luck.”

Surprising: While others may describe him in colorful ways, Kyle Busch had some interesting descriptors for himself after finishing third in the race.

“That last restart was intense,” the driver of the No. 18 M&Ms Toyota said after finishing third. “I thought that that was a bad call coming in and putting tires on, but man, when we went back green, everybody went fighting for the bottom.”

“Really crazy the way that ended up and just drove past everybody on the outside like a bad mofo, just getting my job done like I was supposed to, and kind of recovering our day and ended up third,” Busch continued. “Dave (Rogers, crew chief) made a very gutsy call there to come in and put four tires on it and restart 16th and I just was a bad ass and drove the hell out of it.”

Not Surprising:   After what happened in the fall Richmond race and then what happened at this race, Clint Bowyer no doubt would like to take the track completely off his dance card.

Instead of doing his own spinning, this time around Bowyer collided with the rookie pole sitter Kyle Larson on the very first lap, sending Larson spinning and sending himself into fiery tire hell.

“What a bad night,” the driver of the No. 15 AAA Insurance Toyota said after his 43rd place finish. “I was on fire and I really hate that happened with Kyle because I really like him and I’m a big fan of his.”

“It was just one thing after another and not a very good night.”

Surprising: Rookie Kyle Larson made a surprising comeback drive after starting from the pole and then having that first-lap incident with Clint Bowyer. The young driver of the No. 42 AXE Peace Chevrolet finished 16th and was yet again the highest finishing rookie of the race.

Not Surprising: Dale Earnhardt Jr. did his best ‘Frozen’ imitation, substituting ‘Let it Go’ with just ‘Get over It’ in response to all the tempers flaring after the race. Junior himself got over it by bringing his No. 88 National Guard Chevrolet home in the seventh spot.

Surprising: AJ Allmendinger celebrated his 200th Cup start in style, with his best finish to date. He brought his No. 47 Bush’s Grillin’ Beans Chevrolet to the checkered flag in sixth place.

“It was a good race,” the Dinger said. “Just a tough race track.”

“I was really happy with the car in general.”

Not Surprising: When all is said and done, NASCAR is a family sport. Thus there was an outpouring of love for the ‘King’ Richard Petty as he returned to the race track for the first time after the passing of his wife Lynda.

“I just felt like I needed to have a little time on our own so I have been gone for two or three weeks but I am back in the saddle again now,” Petty said. “I am just learning to live all over again.”

“I am surviving,” Petty continued. “The busier they keep me the better off I will be.

The ‘King’, along with the rest of the Cup Series will be busy as they travel next to the superspeedway of Talladega for the Aaron’s 499 on Sunday, May 4th.

SM Staff
Previous article
Can Austin Dillon Turn His Season Around?
Next article
Ben Rhodes Honored After Induction to NASCAR NEXT Program