Expect Trend of Nail-biting Finishes to Continue at ‘Dega 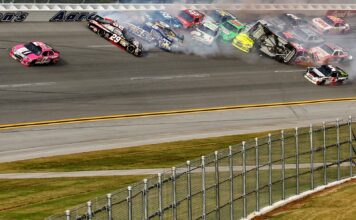 We are only a quarter of the way through the 2014 season and there have already been more memorable finishes than all of last year.

At Daytona, Dale Earnhardt Jr. held off a hard charging Denny Hamlin to win his second Daytona 500. Two weeks later at Las Vegas, Brad Keselowski passed Earnhardt Jr. on the last lap to score the victory. At Auto Club, a green-white-checkered finish allowed Kyle Busch to go from third to first on the last lap and beat rookie Kyle Larson by just 0.214 seconds.

The trend continued at tracks such at Martinsville, Texas, and Darlington. Last week at Richmond may have been the most edge-of-your-seat finish in 2014. In the closing laps, Jeff Gordon, Matt Kenseth, and Brad Keselowski battled hard while Joey Logano inconspicuously snuck past them all with only a few laps to go.

The reason for all of these nail-biting finishes is due to two factors, late cautions and the new points system. Four of the nine races so far have been decided by a green-white-checkered finish and the longest final green flag run was still only 42 laps at Las Vegas. These late cautions set up shoot-out style finishes that create the fantastic finishes you see week after week.

And since the new points system makes winning extremely important, drivers can be a lot more aggressive. Who cares if you crash? You can just try to win next week. That attitude will be turned up to 11 this week at Talladega, a track already known for its chaotic finishes. If this year’s Daytona 500 is any indication, pack racing is back.

Allow me to paint the picture in your mind for you. It’s a green-white-checkered scenario at the biggest and baddest track NASCAR has to offer. The big names, Kenseth, Gordon, Junior and Keselowski are all up front, behind them are restrictor plate aces such as McMurray and dark horse David Ragan. The green flag waves and all bets are off. The first lap is somewhat orderly, yet it’s still three by three all the way through the lead pack.

The white flag waves and the chaos begins. Drivers become more aggressive and bounce off each other. Restrictor plate experts Dale Earnhardt Jr. and Jeff Gordon battle for the race lead and coming off turn four, a large wreck takes out multiple drivers. It’s the big one.

Who wins? Probably whoever survives. That’s the kind of finish I expect to see at Talladega this Sunday. The ingredients are already there for an amazing finish and when you add the fact that winning means more than ever, you have the perfect recipe for the greatest finish of 2014. If you listen closely, you can hear a faint rumble in the background. That’s the calm before the impending storm.

SM Staff
Previous articleMarcos Ambrose and Richard Petty Discuss Richmond Post-Race Incident
Next articleThe Hot 20 – Get hot in NASCAR and it costs you $25,000, in the NHL it is 2 minutes