Surprising and Not Surprising: Aaron’s 499 at Talladega 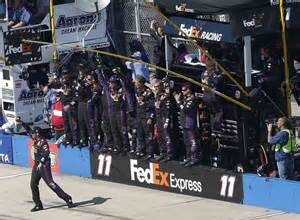 From the wild knock out qualifying that netted Brian Scott the pole position to the crazy green-white-checkered race finish, here is what was surprising and not surprising in the 45th annual Aaron’s 499 at Talladega Superspeedway.

Surprising: It is not often when two champions wreak such havoc in one race, even if it is on an unpredictable superspeedway. But both Brad Keselowski as well as Jimmie Johnson did just that, having uncharacteristically bad days that negatively impacted so many others in the field.

In fact Keselowski negatively impacted the field twice, once early on in the race while battling Danica Patrick for the lead and then later in the race causing a twelve car pileup that involved several other drivers, including the likes of past champions Jeff Gordon and Tony Stewart.

“I just spun out in front of the whole field,” the driver of the white Miller Lite Deuce said. “I don’t know why, if I just busted my butt on my own or lost a tire, but I feel bad for everyone that got torn up.”

Johnson, after suffering his own damage from the first Keselowski incident, had almost the identical problem as Keselowski, spinning out at almost the same exact spot on the race track and catching others in his wake.

“I got caught up in the first wreck and that did some damage; and I don’t know what happened when I spun out,” the driver of the No. 48 Lowe’s/Valspar Chevrolet said. “I just went out in front of everybody. The car just got real loose going into Turn 3 and turned around and collected a bunch of guys, unfortunately.”

Keselowski finished the race in the 38th position while Johnson finished 23rd and remains winless.

Not Surprising: In his 300th start and at a superspeedway not a short track, Denny Hamlin made a statement and won his first race of the season, his first race at Talladega, and his first point’s race at a restrictor plate track. Hamlin also all but sealed up a Chase berth, after missing the Chase completely last season for the first time in his career.

“It feels good to be back in Victory Lane in a points-paying event,” the driver of the No. 11 FedEx Express Toyota said. “We’ve come a long way. We couldn’t finish 22nd in superspeedway races for the longest time and now it seems like when we go, we know we have the knowledge and car that can win.”

“It feels good to come to these types of tracks and win.”

Surprising: Jeff Gordon surprisingly kept his point leads in spite of finishing 39th, as well as breaking his streak of 11 consecutive top-15 finishes. Gordon still leads by three points over Matt Kenseth, who came in just ahead of Gordon in the race, finishing 37th.

“Oh man, we had a great car,” the driver of the No. 24 Drive to End Hunger Chevrolet said. “I could see where the 2 came from the outside lane and came back down to the inside lane, or middle lane, then wiggled and got turned.”

Not Surprising: Whether they had a game plan in their heads or not, both Greg Biffle and Clint Bowyer scored their best ever finishes of the 2014 season.

Biffle, behind the wheel of the No. 16 3M Window Film Ford, finished runner up after leading the most laps at 58. Bowyer, driving the No. 15 PEAK Antifreeze/Motor Oil Toyota, finished third, scoring his first top-5 finish of the season.

“I had a game plan in my head,” Biffle said. “On our speedway program, they did a great job getting the car ready. This was our Daytona 500 car and we wanted to get up there and run with the guys.”

“I don’t think you ever really have a game plan,” Bowyer said. “But I like the situation I saw with Biffle. You know he was going to pull out and make a move. I had my teammate right behind me and I was looking forward to that opportunity.”

“After last weekend, we blew three tires and burned the car to the ground,” Bowyer continued. “To get things turned around on a positive note, we finished Talladega without a crash.”

Surprising: Risk was not worth the reward for Dale Earnhardt Jr., who elected to ride in the rear in the waning laps to avoid the craziness of the finish. Although Junior led the second-most laps in the race, he finished 26th in his National Guard Chevrolet.

“We already got a win and like I said, I’ve been in too many late-race wrecks,” Earnhardt Jr. said. “I didn’t want to be no part of it. And there were three or four there we dodged pretty good.”

“So, we’ve got a car in one piece,” Junior continued. “You have to have that track position at the end and we didn’t have it. We didn’t tear up our car and we will go to Daytona and try to manage the strategy.”

Not Surprising: Talladega makes for friendships formed on the fly and that is exactly what happened between AJ Allmendinger and Paul Menard, who finished fifth and sixth respectively.

“I really thought I had messed us up there and that last restart I’ve got to thank Paul Menard,” the driver of the No. 47 Bush’s Beans Chevrolet said. “He just kept shoving me all the way up through the inside of guys.”

“We had a really fast Richmond/Menards/Jack Link’s Beef Jerky Chevrolet all weekend,” Menard said. “It was really good at the end. On the last restart just pushed the hell out of AJ (Allmendinger) and wound up being okay.”

Surprising: Both David’s, Ragan (defending race winner) and Gilliland, who are traditionally good at plate racing, had a pretty rough day at the race track.

Gilliland’s engine gave way on his No. 38 Love’s Travel Stops Ford, while Ragan was involved in a very hard hit during one of the race’s many wrecks.

“I thought my car was good,” Gilliland said. “We got in that accident and I don’t know if the motor got a little warm when we opened up the duct work, but it just wasn’t our day.”

“It looked like someone got turned in the middle or the bottom lane and we were just kind of minding our own business up top and all I saw was some cars coming up toward us,” Ragan, behind the wheel of the No. 34 KFC Ford, said. “There was nothing you could do.”

“It’s just a shame that when somebody makes a mistake it takes out a bunch of race cars.”

Not Surprising:   Young Kyle Larson was the highest finishing rookie…again, this time bringing his car home not only in one piece but in the ninth position. This was the fifth top-10 finish for the driver of the No. 42 Target Chevrolet and he sits in the 13th position in the point standings.

“I spent most of the day just — well, pretty much all day just trying not to make any spectacular moves to put myself in a bad spot to get in a wreck,” Larson said. “Just wanted to stay out of trouble. We’ve been making up a lot of points throughout the year after Daytona, and to come back to another superspeedway, I was really nervous.”

“Glad to get a good finish and stay up there in points.”

Surprising: Danica Patrick had one major complaint about her race at Talladega. The driver of the No. 10 GoDaddy Chevrolet was, well, just plain hot.

“It was a hot day here in Talladega,” Patrick said after finishing 22nd. “I dropped back to get some clean air. Heating was definitely an issue. It really limited me to the bottom lane.”

“I was getting hot a lot,” Patrick continued. “I think you saw that from a lot of cars.”

Not Surprising: There were many drivers that were not only happy to have ‘Dega in the rear view mirror but were also glad for a good, safe finish to the race.

“It was crazy, but everybody did a really good job,” Carl Edwards, driver of the No. 99 Fastenal Ford said. “The racing was pretty good. It was really intense, but safe I thought relative to what we’ve seen in the past.”

“I expected a few of the big wrecks and tried to avoid those and did exactly that,” Aric Almirola, driver of the No. 43 Gwaltney Ford said. “We didn’t end up on our roof, so it was a solid day and we’ll go on.”

NASCAR next visits Kansas Speedway for some Saturday night racing under the lights in the 5-Hour Energy 400 Benefiting Special Operations Warrior Foundation.