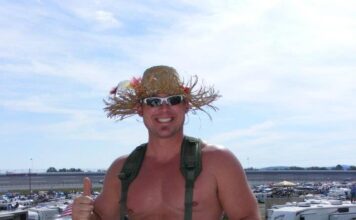 At Talladega this past weekend, one fan, wearing only a Goodyear, received some significant television time during the race broadcast. So, this week’s NASCAR Behind the Scenes simply had to focus on Chris MacNicol, the man otherwise known as the Talladega Tire Man.

MacNicol, surprisingly was not always a rabid, tire-wearing race fan. In fact, the native Floridian moved to Alabama to play baseball in college. One weekend, his baseball buddies suggested they check out the nearby NASCAR race track.

“A bunch of my teammates said to go to Talladega and I told them, “I’m not going to watch that. That’s silly,” MacNicol said. “But I’ve been to every race since. I always tell people who ask me about the races that it is really that different when you are there at the track.”

“It give me goose bumps to talk about it now,” MacNicol continued. “Once you stand next to the track and see 43 cars go by at 200 miles per hour, you are hooked. It’s unbelievable.”

Once MacNicol was hooked on racing, not only did he attend the Talladega races but he also went off to Daytona, which had been on his bucket list. And at Daytona, not Talladega, the Tire Man was actually born.

“One year, my dad, my brother, my best friend I grew up with and his dad said we were all going to meet at Daytona,” MacNicol said. “So, we met them in Daytona, which was on our bucket list in 2004.”

“I had just enclosed the carport on my house and that was my man cave, with all my baseball memorabilia and my NASCAR memorabilia,” MacNicol continued. “I was building an end table out of racing tires for the man cave and I had one tire that a friend gave me after he drove at the Richard Petty Driving School. So, we were walking around the infield at Daytona on Saturday after what was then the Busch race and a NASCAR truck pulled by and asked if we wanted to buy a tire.”

“And, of course, I wanted to buy one for my end table and asked how much,” MacNicol said. “So, for $5 I bought it. I rummaged through the truck trying to find some decent tire and I came across Joe Nemechek’s right front tire that he qualified with. I thought that was cool and so I bought the tire.”

“We were in Turns One and Two but we were camped in Turns Three and Four, which was a long way,” MacNicol continued. “So, I’m carrying my cooler and my beverage and I’m trying to roll this tire. And I’m spilling my beverage and I’m getting frustrated so I laid the tire down and sat down. I sat on the edge of the tire and my rear end sunk in the middle. And I had this epiphany that if I pulled the tire up on my hips that it would stick.”

“So, after I pulled it up, it pulled my shorts up too. It took us close to five hours to get back to our campsite because everybody started stopping and taking pictures. Instantly I knew that this would have to happen at Talladega too.”

“And here we are today.”

Once the Talladega Tire Man was born, MacNicol’s adventures continued, even to the point of having a brush with the law.

“One of my dad’s favorite stories to tell is after we finally get back to the campsite at Talladega and I’m standing there in my tire, a Sheriff’s officer came by in the car,” MacNicol said. “It was a lady Sheriff and she just rolled down her window far enough so we could see her eyes. She motions me to come to the car and she said “Please tell me that you’re wearing something underneath that tire.” I told her “Yes, ma’am and do you want to see?” And she said “Nope”, slowly rolled the window back up and drove away.”

MacNicol found out the hard way after his Daytona tire inauguration, that some modifications had to be made if he was going to be able to continue living out his stint as Tire Man at every Talladega race.

“I had to make some modifications to the tire,” MacNicol said. “Walking around Daytona, I actually got scars on my legs from where it rubbed me raw. When I pulled it up on my hips, the inner tire bead sat just below my hips so it actually was held up on the upper part of the legs. So, you can imagine walking around for a few days in a tire, it didn’t feel that great.”

“So, I got the bright idea from my wife’s granddaddy, who always wore these two-inch Dickies suspenders and I thought I could make it to hold the tire up,” MacNicol continued. “The tire has two U-bolts in the front and two in the back that I attach my suspenders to. I also cut out the bottom, but it was still jagged. So, one day I was walking through Home Depot and I saw this nice, cushy pipe insulation and I thought I could put that around the bottom of the tire. And it worked great.”

The Talladega Tire Man sensation really gained momentum, however, after being featured in a book and also through social media, especially Facebook and Twitter.

“I was approached in 2010, when NASCAR was really trying to put the race fans first, the business communications director for NASCAR at the time and a writer for the Sporting News contacted me about making the Talladega Tire Man part of a book on race fans,” MacNicol said. “The book was “The Weekend Starts on Wednesday”, which was a story all about NASCAR fans, from those like me who go to the race track and act silly to Afghanistan war veterans who have a purple heart and a doctor who climbed Mount Everest and planted a NASCAR flag.”

“There are some pretty amazing people in that book,” MacNicol continued. “Once that started, we thought that we should get involved with Facebook and Twitter. But we mostly did it because we wanted to share pictures with the fans. And it’s just blossomed from there.”

What may be most surprising, however, is that the Talladega Tire Man does not charge for pictures or receive any remuneration for his efforts. MacNicol simply does it for the love of racing and the race fans.

“My only thing is that I do this because I love it,” MacNicol said. “I love racing and I love the fans. I’m not in it for the money. Once it becomes a job, that’s not what I want. That’s not fun anymore. The Tire Man to me is somebody who is out, has passion for racing and is just like everybody else in the stands. I’m no different than anybody else that buys a ticket and comes to the race track.”

What has surprised MacNicol himself the most as he roams the Talladega infield is the warm reception that he gets each and every race.

“The most surprising thing is how gracious people are and how friendly people can be,” MacNicol said. “Sometimes when you walk up and there’s a half-naked man there, you may not get the best response.”

“But everybody is so nice and it’s been that way my entire experience at Talladega,” MacNicol continued. “I’ve made life-long friends and that friendship has just expanded with the Tire Man to an enormous amount of people all over the country. When they showed me on TV on Sunday, we got messages from people in Chicago, Nashville, Charlotte and all over the place.”

“So, that’s probably the best thing and the most inspiring thing to me to come back and do it every year.”

Now in his tenth year as the Talladega Tire Man, MacNicol realizes that he may not be able to do this forever. But he has already been thinking ahead and is well prepared for the future.

“I’m 40 now and pretty soon now, the Tire Man is going to have a little drag in his rear quarter panel,” MacNicol said with a laugh. “But I’ve got three boys, ages 11, 9 and 5, and last year, I made them their own tires.”

“I didn’t force them to wear them and they have to want to wear them,” MacNicol continued. “I didn’t bring them this past race but they said I had to bring them next race.”

Simply put, MacNicol wants all race fans to know one thing about the Talladega Tire Man.

“I just appreciate the opportunity and just love being able to convey a fan’s passion about NASCAR,” MacNicol said. “I am a huge race fan.”

“And basically I’m just me.”