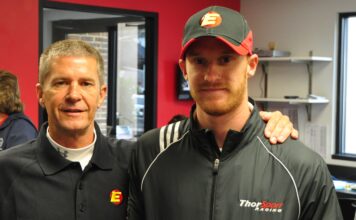 Jeb Burton, his father Ward, representatives of his new sponsor Estes Express Lines and his new team ThorSport Racing were all on hand at the Monster Mile this morning to share the news of their partnership in the NASCAR Camping World Truck Series.

And while father and son are ecstatic with the new opportunity, both admit that the road to this moment has been filled with turmoil and great emotion.

“I can tell you, from January when the rug was pulled out from under us until now, that was the most devastated I have ever been in my whole life,” Ward Burton said. “Those were weeks and the only time in my life when I could not find anything positive.”

“It was like this, if you had a child who was sick with cancer and the medicine was there to fix his medical problems but you either did not have the means to do it or the way to do it and you couldn’t save him,” Burton continued. “That’s how I felt.”

“And then we came back in 2013 and then that got pulled out from under us after they had initiated a 2014 contract and even made payments,” Burton continued. “So, you can imagine that Jeb has been through a lot of inner turmoil.”

“But the way I look at it, it’s going to grow his inner character and when he does have relationships like this, he’s going to work it hard and make it successful and he’s going to appreciate it so much.”

Jeb Burton was indeed most appreciative as he talked about his new opportunity with Estes and ThorSport Racing. The 21 year old acknowledged that not only would he be racing full-time in the Truck Series for 2014 but also with options for the future as well.

“It’s a really big deal for me and my family to be with Estes Express Lines,” Jeb Burton, driver of the No. No. 13 Estes Toyota Truck for ThorSport Racing said. “It means a lot to me and I look forward to the future with them.”

“Each time I get behind the wheel, I’m not only representing the Burton family and ThorSport Racing, now I have the privilege of representing everyone at Estes, which means a team of almost 15,000 employees including more than 6,000 truck drivers.”

In addition to Estes and ThorSports, both Jeb and Ward Burton were emotional when talking about the NASCAR Camping World Truck Series, seeing the Series as giving many young drivers the chance to make their mark. In fact, Burton has already made his mark in the Series, having competed in all four Truck races this year, producing two top-10 finishes and ranking eighth in the Series standings.

“Thank God for the Truck Series,” Ward Burton said. “Without the Camping World Truck Series, a lot of kids like Jeb wouldn’t have the opportunity either.”

“It’s such a small window for a driver to get a ride and then win races,” Burton continued. “So, the whole dynamic has changed and if it had been like this when I was coming up, I would have never had a chance. It would have never happened for me.”

“I didn’t have financial backing to bring with me,” Burton said. “And now, there are a few exceptions, but most for most of the kids don’t have it that way either. The economy and the way businesses have made financial decisions about the sport has just changed so much.”

Jeb Burton was also emotional as he talked about what he hoped to bring not only to the race track but also to his new Estes family.

“Last year I had a really good year and we had some good results,” Jeb Burton said. “Hopefully our results will pick up and we will get a win.”

“I’m really excited to meet all the Estes drivers, bring them to the race track and entertain them every week because I want to make them all NASCAR fans.”

But for both Ward and Jeb Burton, emotions spilled over as they acknowledged the new opportunity that would kick off at Dover International Speedway this weekend.

“Everything happens for a reason and I felt that our deal was that way,” Jeb Burton said. “I just keep trying to be patient and get better and improve.”

“Jeb and I both cried at our announcement with ThorSport and Estes on Tuesday,” Ward Burton said. “I don’t know any other way that I can tell you how much that means to both of us.”

“Luckily every now and then you meet some people who you have something in common with you and your hard work pays off.”