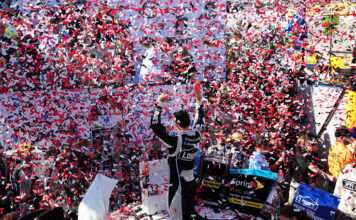 For the ninth time, Jimmie Johnson, driver of the No. 48 Lowe’s/Kobalt Tools Chevrolet stole the show at the Monster Mile, making it two race wins in a row and virtually guaranteeing himself a place in the Chase for the tenth consecutive year.

“It was an awesome race car,” Johnson said. “The first run I wasn’t sure we were really going to have the normal Dover magic here. Once the track ‘rubbered’ in our car came to life and it was so good.”

“It’s amazing that we can stay on top of things here with the different generation car, different rules, different tires,” Johnson continued. “This place just fits my style and Chad Knaus’ style.”

“I don’t even know where to begin,” Chad Knaus, winning crew chief, said. “We came in here with high expectations and things went really well for us right out of the gate. We were pretty optimistic at that point. Qualifying went well and we were excited to get into the event today.”

“At that point, we tried to manage the race and it turned out to be a pretty good day.”

Both Brad Keselowski, who started from the pole, and Matt Kenseth, who remains winless for the season, attempted to hang with the six-time champ, but finished second and third instead.

“We just had an up and down day,” the driver of the No. 2 Miller Lite Ford said. “We started up front and went to the back early in the race.”

“Then we took back off and had some strong runs,” Keselowski continued. “We were probably going to get a crack at Jimmie and then that last caution came out. We drove back up to second with the help of the restart and we were pretty even with Jimmie but it was just a matter of being out front.”

“It was a solid day for us,” the third place finishing driver of the No. 20 Dollar General Toyota said. “I did a poor job qualifying and so good adjustments and pit stops moved us forward. There was just that one group of cars that we couldn’t quite run with. We just need to be a little bit faster.”

Kenseth, who looked like he had a shot to win, actually struggled on the final restart with six laps to go, spinning his tires and then getting into the wall.

“The 48 spun them and I spun them a little bit,” Kenseth said. “I just need to do a better job and let the rear tires quit screaming so I could get going. And then Clint (Bowyer) hit me I guess trying to give me a push there.”

In addition to being a factor in the final restart with Matt Kenseth, Clint Bowyer was a factor in another incident early in the race with Kyle Busch, who looked strong as he tried to achieve the sweep of the race weekend after winning both the Truck and Nationwide races.

Bowyer and Busch tangled on Lap 126, putting Busch out of the race. Bowyer went on to salvage a good finish, bringing home his No. 15 Cherry 5-Hour Energy Special Ops Warrior Foundation Toyota home in the fourth position.

“I hated to be in that position with the 18,” Bowyer said. “I thought I was clear, obviously I wasn’t. Ruined his day.”

One of the other major incidents of the race involved AJ Allmendinger, Greg Biffle and Ricky Stenhouse, Jr., the latter of whom sustained hard hits on Lap 135.

“Inside of the car I didn’t really know what happened,” the driver of the No. 16 3M Ford Fusion said. “I just knew that the 47 got into us pretty hard and turned us into the fence. After watching the replay I see what happened.”

“They were racing hard back there and he stuck it into a hole that maybe there wasn’t room for,” Biffle continued. “There definitely wasn’t room come three-quarters of the way around the corner I guess and he slid off the bottom and got his right-rear caught by the 17 and up into us. It was a chain reaction. This place is tight and fast and when you get racing that hard back there on a restart stuff like that is going to happen.”

“We were really loose,” Ricky Stenhouse Jr. said. “The 47 jumped to the inside of us there and I tried to stay out of his way and he got me. We met right-rear to left-front and it got him sideways and everything else happened after that.”

“Our Nationwide Insurance Ford was really, really loose all race long and we were trying to hang on with it,” the driver of the No. 17 Nationwide Ford Fusion said. “We didn’t want it to end that way and we got our teammate caught up in it and tore up a lot of cars.”

“That is now what we wanted to do. It is a tough end to our day,” Stenhouse Jr. continued. “It is a bummer.”

In one of the more bizarre incidents and for just the third time in the last few years, once in April 2004 at Martinsville and once in 2010 at the Daytona 500, the red flag was displayed after a piece of concrete dislodged from the race track and hit Jamie McMurray’s car.

The red flag lasted six minutes and 39 seconds and while McMurray could not work on his car during that time, repairs were made when the red flag was lifted and the driver of the No. 1 Cessna Chevrolet got the ‘lucky dog’ break, soldiering on to a respectable 13th place finish.

Robin Pemberton, NASCAR’s vice president for competition, addressed the media after the race, advising that NASCAR was not aware of the concrete hole prior to the race and then addressed it immediately after the issue occurred with materials that are utilized regularly for repair work.

“We do a track walk after every race and in the morning and at the time, that had been a previous patch, but our staff did not see anything wrong with it,” Pemberton said. “The hole was two or three inches deep and six or eight inches by ten inches, so it was pretty substantial.”

“Our team has equipment and product at every facility in case there is a need for it. It’s an epoxy type filler that we use and is the same material we use whether it be asphalt or concrete.”

Many of the drivers praised NASCAR’s handling of the concrete repair, including Brad Keselowski.

“I think NASCAR did a good job or whoever fixed it did a good job of repairing it,” Keselowski said. “It’s hard to come back up there at the end and it was definitely an issue when it happened. You knew it was going to get worse if it wasn’t repaired and a small hole was going to turn into a big hole. I give NASCAR credit to realize that, stop, and fix it.”

Kyle Larson, behind the wheel of the No. 42 Cottonelle Chevrolet, was the highest finishing rookie yet again. With the third place finish of Matt Kenseth and the 15th place finish by the No. 24 Drive to End Hunger Chevrolet Jeff Gordon, Kenseth gained the points lead over Gordon and is now in P1 by two points.

The full race results are as follows: