Carl Edwards And The AFLAC Duck Win At Sonoma 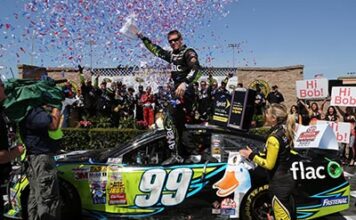 Carl Edwards won his first road course in Sonoma, California Sunday. He ended a five race Hendrick Motorsports win streak that started in Kansas. Edwards took the lead from Marcos Ambrose with 25 laps to go and never looked back. Edwards locked himself into the chase with the second win of the year. Edwards, who won the race in a Roush-Fenway Ford was the only Ford in the top seven spots.

Edwards commented to his crew “That was awesome. Thank you, guys,” at the checkered flag.

The triumph had special meaning for Edwards precisely because it was Gordon who was chasing him to the finish line.

“That’s a moment I’ll never forget, to be standing in Victory Lane and to have held off Jeff Gordon, with all the success he’s had here and in our sport,” Edwards said after climbing from his car. “It’s just really, really special.

“I’m living proof right here that, whatever it is you’re doing, just keep doing it, and don’t ever give up, because somehow things can work out. I’m just very fortunate.”

Jeff Gordon, who finished second,  made a late race charge but was unable to catch Edwards, “I wish I could have had those last five laps to do over again because I think if I could have not made a couple mistakes, I would have been on him with more like two laps to go, and I think I would have had a shot,” Gordon said. “But hey, that’s the way it goes.”

Dale Earnhardt, Jr., who came across the line third, was involved in heavy contact with Matt Kenseth toward the end of the race. Earnhardt took responsibility for the situation stating on Twitter, “It was a little bit messy,” Earnhardt said. “I’m sick to my stomach about getting into Matt there. I just hopped that curb and it threw me right into him. I shouldn’t have been running him hard, I guess. I just got into the curb and it launched me over into the side of his car.”