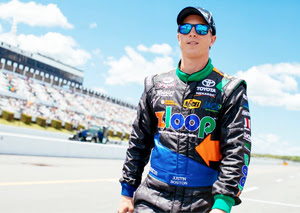 Boston will drive VMS’s familiar No. 25 ZLOOP Toyota Tundra in his series debut. His team owner Billy Venturini will serve as crew chief.

“We’re all stoked to head to Bristol to make our series debut,” Boston said. “ZLOOP is the presenting sponsor for the race so it gives us a little added excitement for the day. I feel really confident going in because as a team we’ve always ran well on the short tracks, especially the two high-banked half-miles the ARCA Series runs on, Salem and Winchester.”

Boston’s biggest challenge will be transitioning from the low-slung ARCA cars to the bigger, boxier Truck Series machines.

“It’s going to be interesting to see how differently they drive from one another,” he said. “The bodywork is obviously completely different, but as a driver it should be the same for me inside the car. It’s just going to be learning the sight lines from the cockpit and getting the feel of how close you can run to the other trucks out there. If this race is anything like the ARCA races at Salem and Winchester I expect it will get really physical so I’ll need to know where the limits are.”

Despite the obvious challenges, with a familiar voice on the radio Boston expects the transition into the Truck will go smoothly.

“It’s awesome to have Billy on the pit box for this race,” he said. “He knows what I look for in the ARCA car and he’ll really help get me up to speed in the truck too. His experience as a driver helps relate to the feedback I give. It’s great to have that chemistry with your crew chief. He almost knows what I am going to say before I say it, and that’s going to be huge as we try to adjust to a new type of racecar, a new track, and a new racing series.”

Although widely known for their success in ARCA, VMS has competed in all three national ranks of NASCAR (Sprint Cup, Nationwide, and Camping World Truck Series) during their storied 32-year history with owner and driver Bill Venturini and most recently in 2013 with John Wes Townley in the Nationwide Series.

“This is a great opportunity for our team to showcase our ability to compete at the next level. We’re extremely excited to carry on our relationship with Justin (Boston) and his sponsor ZLOOP,” said Billy Venturini, co-owner of Venturini Motorsports. “Expanding our organization’s efforts into the NASCAR Truck series has been a total team effort and a chance to build our future. We’re grateful to our partners for giving us the chance to achieve our goals.”

“Justin and I have worked closely together in the ARCA Series the last two years and have developed a strong relationship. I have a ton of confidence in his ability and believe our chemistry will translate into further success on the track at the next level.”

Over the years, VMS has evolved from a small, family-operated race team to become one of the premier NASCAR driver development teams in the country. In 2012, the Venturini family was inducted into the Italian American Sports Hall of Fame for their years of positive contributions to the racing industry.

Practice for the UNOH 200 Presented by ZLOOP runs from 10-10:50 A.M. Eastern and 12-1:30 P.M.Eastern on Wednesday, August 20; Keystone Light Pole Qualifying is scheduled for 4:40 P.M. Eastern and the green flag on round 13 of the 2014 NASCAR Camping World Truck Series season is slated for shortly after 8:30 P.M. Eastern. The race will be televised live on Fox Sports 1 and broadcast live on selected affiliates of the MRN Radio network as well as Sirius XM NASCAR Radio.

About Venturini Motorsports
Venturini Motorsports (VMS), fielding cars for over 30-years in the ARCA Racing Series presented by Menards, is one of the premier NASCAR driver development programs in the country. Multiple team championships and consistent on-track success, VMS has evolved into one of the most recognizable names in motorsports. Since 2007, VMS has assisted in the career development of notable NASCAR drivers such as Joey Logano, Justin Allgaier, Ryan Blaney, Alex Bowman, Brian Scott, Kevin Swindell, John Wes Townley and Erik Jones. Over the years the Venturini name has become synonymous with modern-day racing in America. In 2012, the Venturini family was inducted into the National Italian American Sports Hall of Fame (www.NIASHF.org) and now find themselves enshrined with such sports icons as Joe DiMaggio, Mario Andretti, Vince Lombardi, Tommy Lasorda and Rocky Marciano.

About ZLOOP® Computer and Electronics Recycling Centers
ZLOOP® Computer and Electronics Recycling Centers (ZLOOP) makes eWaste recycling easy for anyone. Founded in Hickory, North Carolina in 2012, ZLOOP guarantees eWaste is recycled domestically and that all data devices are permanently destroyed of all information. Zloop provides consumers, small businesses, corporations and Government entities peace-of-mind by providing: Flawless ExecutionTM – from start to finish, Zloop’s unique and proprietary processes provide: 100% TransparencyTM – every step in our process is documented and auditable 24/7; 100% Domestic TransformationTM – all commodities created leave our facilities as feeder stock, ready to be made into new products; and Zloop is 100% Landfill FreeTM – everything we create is either used for new products or used to create clean energy. ZLOOP is compliant with all federal (DOD and NSA), state and local government regulations for the safe and secure destruction of highly sensitive data, and is working toward certifications from the Responsible Recycling Practices for Electronics Recyclers (R2:2013) as well as Basel Action Network’s eStewards. For more information on ZLOOP’s eWaste recycling services, call today at 1-855-ZLOOP-IT (1-855-956-6748) or visit zloopit.com. eWaste is Serious Waste. Recycle®.