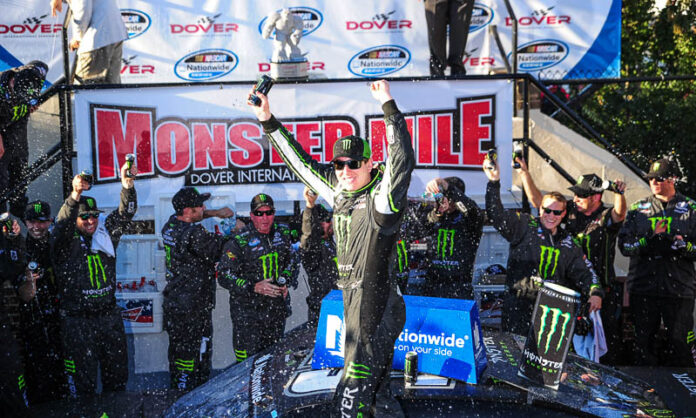 Kyle Busch behind the wheel of the No. 54 Monster Energy Toyota, scored his fifth Nationwide season win to take the 29th Annual Dover 200 at the Monster Mile. And with that fiver, he also broke a tie with Joey Logano to become the all-time win leader at Dover.

“Our day was really good,” Busch said. “We were a little skeptical of it yesterday but the guys did a good job of making adjustments for today.”

“From the start of the green flag, we had a good race,” Busch continued. “I was biding my time early and we missed that first wreck. We were able to pit, get out front and set sail from there.”

“It was nice to put together a good run and hopefully carry that into tomorrow.”

Joey Logano, who led laps early in the race, finished second in his No. 22 Hertz Ford. This was his ninth top-10 finish at Dover and his eighth top-10 finish for the season.

“The first half of the race went perfect and we were able to go out there and lead a lot of laps and be very, very fast,” Logano said. “But as the race went, we put four tires on and lost the lead. Our car was really tight from there on out. I’m not really sure what happened but we will try to figure it out.”

“We just stayed tight there the last run,” Logano continued. “Overall, it’s second but we come here and expect to win. We began the race well but we lost the handle.”

Chase Elliott, in the No. 9 NAPA Auto Parts Chevrolet, finished third and also was the highest finishing rookie. Elliott did, however have his share of adversity, getting into a wreck early and suffering some damage that hindered his progress forward.

“I’m proud and frustrated at the same time,” Elliott said. “We had a super-fast car from the get-go.”

“We were just biding our time that first run,” Elliott continued. “I made a mistake following those guys way too closely and that was completely my fault. I drove ourselves into a wreck and then we couldn’t get back up to the front.”

“We had a really good car from the drop of the green and the guys did a fantastic job getting it taped back up in a way that the fender wasn’t going to fly apart on us.”

“We tried to battle as hard as we could but it just wasn’t enough.”

“That was a lot of fun,” Buescher said. “We were really good on pit road and nice and consistent. Every week you have to get better and our consistency has been there. This is our best finish since Mid-Ohio.”

Elliott Sadler, behind the wheel of the No. 11 SportClips Toyota, rounded out the top five, a position that he had not been in for quite some time.

“It’s been too long for this race team,” Sadler said. “We made a lot of adjustments today. Top five at Dover is the best we’ve ran here.”

Kyle Larson overcame two penalties, one for leaving the pit box with equipment and the other for speeding, came back to finish sixth in his No. 42 Cartwheel by Target Chevrolet.

Another driver that had a world of trouble was Brendan Gaughan. The driver of the No. 62 South Point Chevrolet had a rear suspension issue, sending him to the garage and putting him nine laps down to finish 28th.

With his third place finish, Chase Elliott maintained his lead in the championship point standings, now 26 points ahead of teammate Regan Smith.

The full Nationwide Series results for the Dover 200 are as follows: