For Dalton Sargeant, Everything is Brand Spanking New 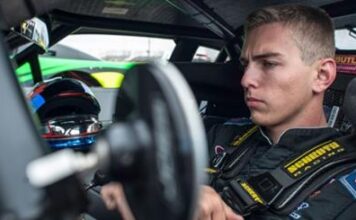 For Dalton Sargeant, who is running in the NASCAR K&N Pro Series this season, everything is brand spanking new, from his new sponsor to his new crew chief. And with that, Sargeant simply cannot wait for the drop of the green flag in his new rookie season.

One of the biggest new things in the life of this up and coming driver is his sponsor. GALT, Global Asphalt Logistics and Trading, has stepped up to sponsor the Sargeant’s No. 51 Chevrolet for the full K&N East Season. GALT is a leader in asphalt trading around the world and will start their new sponsorship at the season opener on February 15>th at New Smyrna Speedway.

“GALT was one of our partners when I was living in Europe,” Sargeant said. “They wanted to help out with my future moving forward. I had a good relationship with them through my father.”

“It’s so exciting and refreshing to have GALT come on board with us in every single motorsports discipline we’ll be participating in during the 2015 racing season,” Sargeant said. “GALT has a great group of people behind them and it’s been a pleasure working towards this goal with them.”

“I can definitely draw so many parallels between a company like GALT and an organization like HScott Motorsports with Justin Marks. It was evident after the first time our friends at GALT stepped into the facility at HScott Motorsports with Justin Marks and saw the resources and equipment that they were just as excited about the 2015 NASCAR K&N Pro Series racing season as we were.”

“It was really refreshing to see that kind excitement with GALT and their associates and their level of involvement just grew from there. They realized this wasn’t just another race team but an organization that could push their brand to a whole new level.”

“I’ll try to help them mobilize their name, particularly in America, because they are more of a European company. So, I hope to help them gain in popularity.”

Along with his new sponsor, Sargeant also has a brand new crew chief in Kris Bowen, whose resume includes a New Hampshire win, two poles and 16 top-5 finishes under his belt in his three seasons atop the pit box.

“I’m very excited to work with Kris,” Sargeant said. “He’s been a driver himself and has worked with some good drivers as well. He’s a great guy and he will play a vital role in my career prospects.”

“We’re definitely very similar. We like to joke around a little bit and have fun off and on the track. I’m really excited to work with him.”

Bowen is equally as excited to get started with his brand new driver.

“This is such a great opportunity for not only myself but also for such a talented driver like Dalton Sargeant,” Kris Bowen said. “I’ve been watching Dalton since he made his debut on the late model stock car scene in 2014 and have been impressed with his results with such little stock car and oval experience for that matter. He came from a background in karting which is where I began my racing career as well, he’s a perfect example of a driver who’s taken all the attributes of being a successful driver in karts and has applied them in stock cars with great success.”

“With a great driver and all the tools, cars and equipment that I could ever ask for from a great organization like HScott Motorsports with Justin Marks, I’m really looking forward to this opportunity and can’t wait to get started at New Smyrna Speedway.”

In addition to the K&N Series, Sargeant also hopes to weave in other new opportunities for getting seat time and time behind the wheel, especially on tracks where he lacks familiarity.

“I’m going to be running the full K&N East Series and I’ll also try to fit in a few K&N West races, although we haven’t determined which ones yet. Whenever I have off, we’re going to fill in with some other stock races,” Sargeant said. “It’s tough because they changed the testing policy. It will definitely make things more tricky for the rookies coming in this year. I’ve already gone to several of the tracks before in the past and I’m going to try to run Super Late Models and stock races at those tracks prior to my K&N races.”

“I think the biggest challenge will be figuring out the new car with no time to test and no time in it.”

While everything is brand spanking new for the young driver who caught everyone’s eye after finishing runner up in the Snow Ball Derby, Sargeant is definitely set for the 2015 race season.

“I definitely have high expectations for myself going into this new season,” Sargeant said. “I definitely want to run really well. The pressure is not really high.”

“I’m just another guy from South Florida,” Sargeant continued. “I have kind of a cool background coming from open wheel cars, which is kind of different. But at the end of the day, I want to get out there and do the best that I can.”

“This winter break has definitely been too long. I’m ready to start the new season and go racing.”