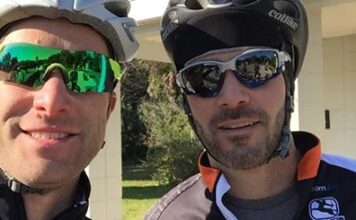 “I’m excited about running both the Truck and Xfinity Series at Daytona,” Lagasse said. “Daytona doesn’t tend to be a physically demanding track. So, I don’t know that there is anything in that regard that I’m concerned about.”

“I would tell you that I think it is actually an advantage to do more racing.”

“We’ve all been off for a couple months. You do everything you can to stay sharp and be sharp with your starts, but the more seat time you get, the better you are, especially on the plate tracks which is so unique. So, I think it’s an advantage to be able to run both.”

Lagasse also thinks that doing double duty will assist him in planning for the mental strategies needed in both races on the high-banked track and in the draft.

“I think strategies will be similar across the board between the Truck and Xfinity Series,” Lagasse said. “I think it’s going to be more about learning the individual vehicles. Last time I drove the race truck, they sucked up so much more aggressively than the cars. So, learning and adapting to what each vehicle wants to make it go is going to be the task. I think overall, general drafting principles will apply across the board.”

As Lagasse prepares for double duty at Daytona, his two race teams are preparing as well. But Lagasse said that dual preparation started well before the race truck and car headed to Daytona.

“My work with both teams has been going on for about a month or so since I found out I would be working with both teams,” Lagasse said. “The great thing is that I’m with two great groups who are experienced. NTS is a great Truck program and you are going to see them win a lot of races this year I believe; hopefully with me in them. And then what Mark Smith is doing at Tri-Star is just really impressive to me. Mark has got some great people in there and he has really ramped the program up.”

“The people are what matters the most at the end of the day. I’m excited to be with both groups, both teams and both crew chiefs and I’m looking forward to it.”

While Daytona is not an audition per se, Lagasse admits that in spite of the double duty, his future on the track is still a bit up in the air.

“I know it will not be a full schedule in the trucks,” Lagasse said. “I don’t know that answer yet. I know there are a lot of people working to make things happen but I don’t know if timing wise if that will happen.”

“I’m looking forward to doing both races,” Lagasse continued. “I grew up racing all different kinds of things and I think it makes you better that away. So, whether it’s dirt, asphalt, road racing, I’ll run whatever opportunities are there where I can be competitive.”

“My goal is to do a great job for both organizations and grow from there.”

In addition to the double duty at Daytona, Lagasse is doing double duty off track, with his cycling safety program and his adventure as a new father.

As far as his cycling program, last week, the driver participated in a 40-mile bicycling event, from Marineland to Daytona International Speedway to raise awareness about safety for cyclists and pedestrians through the Alert Today Alive Tomorrow Safety Program.

“Last Friday’s cycling event turned out to be way more fun than I anticipated and we made some great friends out of it,” Lagasse said. “We rode out from St. Augustine to the Speedway. It was supposed to be more drivers but schedules got difficult at the end.”

“So, it was just two of us, myself and Jimmie Johnson. And then we had some professional cyclists, Tim Johnson, Christian Vande Velde and Dirk Bockel, an Ironman and professional triathlete.”

“The goal was to raise some awareness and to really humanize cyclists. I think from both sides there is a disconnect between cyclists and drivers, both of whom believe the road is theirs. And at the end of the day, we’re going to have to work together.”

“We hope everybody will to be safe. That was the goal of it and it turned out to be a lot of fun. In fact, I’ve been texting back and forth with Christian and now he is coming to the track to check out some racing. So, hopefully we have made some new fans for our sport too. We need to see people like that enjoy our sport.”

During the bike ride, Lagasse not only gained respect for his fellow cyclists, including six-time NASCAR champ Jimmie Johnson, but also gained a whole new perspective of the track.

“Jimmie is a monster,” Lagasse said. “He’s in killer shape. There was probably fifteen of us and everyone pulled their load.”

“The highlight of it was a last minute surprise with a lap around the race track on our bikes. That was a totally different perspective. I’ve been around on rental cars but to cruise around on a bike and to stop and climb the banking was pretty neat.”

“Tim Johnson rode the bike on the bank but he’s nuts. The rest of us rode around the bottom. Tim was up there playing. You don’t realize how much banking there is until you try to climb it. It was great and I thank the speedway for that opportunity. I hope that is the beginning of an annual event. So, hopefully we’ll be able to do it again next year.”

Lagasse’s other double duty off track is the one of which he is most proud, new dad. He and his wife welcomed Emelia, born just a month ago.

“She has me completely wrapped around her finger already,” Lagasse said. “It’s our first and she has pretty much figured out how to control me already. It’s been an amazing experience and I’m having a lot of fun with it. I’m lucky that I’m sleeping more than a lot. For the most part, she’s been very good.”

“She is going to come down and stay on Saturday night after the race to hang out. She’s still pretty young so we won’t spend too much time around the track.”

“I’m excited to race at Daytona International Speedway in the NEXTera Energy Resources 250 and the Alert Today Florida 300,” Lagasse said. “I enjoy racing at Daytona because it is the home track for me and the team.”

“I am also honored to have the ‘Alert Today, Alive Tomorrow’ on both cars during Speedweeks. The campaign is to raise awareness for bicyclists, pedestrians and motorists. As an avid cyclist it’s an honor to be able to carry the ‘Alert Today, Alive Tomorrow’ safety message. My goal is to get everyone to just take a couple extra seconds to think about the safety of others on the road.”

“It’s just humbling for sure to be a part of it all.”