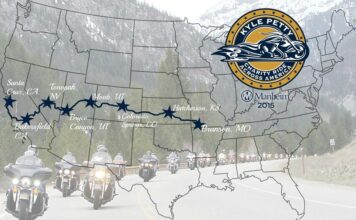 With the Charity Ride Across America celebrating its 21st anniversary, this week’s edition of NASCAR Behind the Scenes focuses on Kyle Petty, who founded the unique motorcycle event that raises money for a charity near and dear to his heart, Victory Junction Gang camp.

According to Petty, the ride began very simply 21 years ago, with a few NASCAR friends and avid motorcyclists joining together to share a trip across country. And then it took on a life of its own once charity came into play.

“We had done a ride before with a couple friends, Eddie Gossage and Robin Pemberton, and we talked about it then and not long after that we rode from North Carolina to Phoenix,” Petty said. “We just started picking up people along the way. So, we thought, what a cool idea if we just rode across country and picked up people as we went like a bike-a-thon.”

“Well, that didn’t go over too good because I was driving a race car at the time and you only get two off-weekends a year. So, everybody got mad because you didn’t want to spend one of your off weeks riding motorcycles across country.”

“So then we came up with the idea to do it for charity, stop at children’s hospitals and give money away, and try to help local communities. That first year, we thought it would never get any better than that and we were never going to do it again.”

As Petty reflected on the 21 years of the ride, there were so many highlights to remember. But it was really the people involved that has made it so very special to him and his family.

“The highlight in the beginning was the ride,” Petty said. “Riding is just a highlight unto itself.”

“But besides riding, the highlight was stopping at some of the children’s hospitals and seeing the kids. Coca Cola has always been a big sponsor of the ride and they’ve got motorcycles that have side cars that look like Coca Cola bottles. The kids would come out and they would love that. I think that was a big part of it in the beginning.”

“As we all got older and we rode more, I think the big part of the ride is the people that ride and meeting people along the way.”

“We met so many race fans and so many cool families, kids and people along the way. They come out along the way or at a gas stop and just talk about motorcycles, racing and camp. I think the highlights have been the people. That is what has made it special.”

Of course, in 21 years of riding across the country, there have been a few challenges and funny stories with the trek as well.

“The first year, the very first fuel stop, there were only 35 of us. When we pulled into this gas station, there was a lady running it and she cut off the power and locked the doors. She thought we were a motorcycle gang,” Petty said. “She would not sell us any gas. So, we had to work our way back through traffic.”

“When we got to Vegas, they asked where we were going next and they said they would go with us to Phoenix and then go back to California. And the next thing I know, they’re in North Carolina with us.”

“Every night they would go to Walmart or Kmart and buy more clothes. They just kept riding with us. Their name is Dave and Renee Bartell and they’ve been with us for every ride.”

“This will be their 21st ride. They’ve been with us every year.”

“One of the strangest things, we were somewhere in New Mexico and we had ridden about 70 miles and we hadn’t passed a house or seen anything in miles,” Petty said. “Terry Labonte was with us on this ride. We came to an intersection and there was a family standing in the back of a pickup truck with all their Terry Labonte T-shirts on and Terry Labonte hats on.”

“They had driven three and a half hours just to one intersection because they knew we would be coming through there in hopes they would get a glimpse of Terry Labonte. So, we stopped and all of us had pictures taken with them. We spent about twenty minutes alongside the road and then left and went on.”

“There has been some strange stuff that has happened but it has been fun.”

The 21st anniversary also includes some special tributes, one to Richard Petty, ‘The King’ who will be riding for a portion of the event, as well as to Don Tilley, who has mapped out the ride every year until this year when he was killed in a motorcycle accident this past summer.

“The King bought me my first motorcycle when I was five and we’ve been riding ever since,” Petty said. “He’s always ridden and has always had bikes. When he has time, he goes and I think this year he is only going for three or four days because he has to be at the race track. But he goes as often as his schedule permits.”

“For twenty years, we’ve had a gentleman named Don Tilley, who owns Tilley Harley Davidson in Statesville, North Carolina and he’s always drawn our route out,” Petty continued. “He told us what were the pretty roads and he knew more roads than Rand McNally, I’ll tell you that. He would draw out maps and he drew one out for this year.”

“But last summer, he was in a motorcycle accident and passed away. For 21 years, Don Tilley has drawn the route so this will be the last year and our last ride that he will route.”

“Someone else will have to do that and we’re looking for somebody. But I think he’s pretty irreplaceable.”

While there have been so many highlights, funny stories, and tributes in the 21 years of the Kyle Petty Charity Ride, there is nothing more important to its founder than the purpose of the ride, raising money for Victory Junction camp.

“For camp, the ride is critical,” Petty said. “We’ve raised $16 million the last twenty some years.”

“The ride is one of the founders of camp. It’s so important to be able to send kids to camp free. That’s the whole point of Victory Junction that these kids with chronic and life-threatening illnesses can come to camp and it doesn’t cost their parents anything to send them.”

“We’re constantly raising money at camp and to have a fundraiser like the Kyle Petty Charity Ride is really big for camp. The water park, where the swimming pool is, was donated by the ride. So, camp and the ride, even though they are two separate entities, it’s important for camp to continue the ride.”

Petty hopes that all race fans will participate in this year’s 21st anniversary ride, which kicks off May 2nd, in whatever ways they can. But most importantly, he hopes that fans will actually come out and cheer the riders on in person as well as making any kind of contribution.

“Fans can follow us on Facebook (www.facebook.com/KPCharityRide) and Twitter (@KPCharityRide), which everyone has now,” Petty said. “But if we come close to your area, we want people to come out to the gas stops or the hotels at night and say hey, get autographs from Harry Gant, Herschel Walker, myself, my father when he is with us, and just hang around and talk camp and racing.”

“And please make a donation to the ride because that money goes right to camp.”

So, just what does this ride mean to Kyle Petty personally?

“I think that’s hard to put into words,” Petty said. “In the beginning it started as a fluke and it has turned into something far beyond my wildest dreams and imagination.”

“It’s kind of like camp. You build a bunch of buildings at camp and you think, what a cool looking place. But it’s really nothing until the kids come.”

“And then it has a spirit and it picks up a heartbeat of its own. It becomes alive.”

“And I think the ride is the same thing,” Petty continued. “You take one bike and then there’s two and four and eight. And the next thing you know, you have 140 or 150 riders and everybody believes in the same thing, giving back and caring.”

“And the ride takes on a life of its own. I think it is just the spirit of the ride and the people of the ride.”

“The caring and the giving of the ride is what it means to me. That’s what it represents.”