CHEVY NSCS AT PHOENIX ONE: Post Race Notes and Quotes 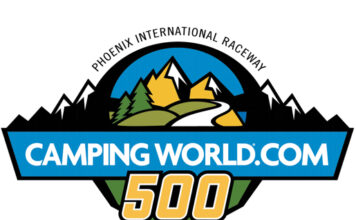 KEVIN HARVICK, NO. 4 JIMMY JOHN’S/BUDWEISER CHEVROLET SS – RACE WINNER
“The restarts were just really slippery and I learned that in the race yesterday. You had to really maintain your entrance speed and really slide the thing through the center of the corner to try to help keep it pointed up off. But I just want to thank the fans. This is a really special place of all these West Coast race for us to win. I want to thank everybody who helps us on this car and everybody at SHR for uh, man. These things are incredible and really fun to drive.”

FOR THE SECOND STRAIGHT YEAR, YOU ARE THE FIRST REPEAT WINNER. AND YOU SAID THERE WOULD NOT BE ANY CHAMPIONSHIP HANGOVER AND THAT YOU WOULD KEEP BUILDING AND THAT YOU HADN’T PEAKED YET
“I think when you look at the start of this year, we know each other so much better. We have a lot of things different than what we had last year and we had that experience of everything that we did to race for the championship. So, I just feel like the bond between this team is really special. Rodney Childers (crew chief) and myself and the engineers and everybody gets along so good. It’s almost scary how well things are going. You don’t want to talk about it too much because you want it to keep going. But I’m just really proud of these guys on this team and everything that they do.”

JAMIE MCMURRAY, NO. 1 CESSNA CHEVROLET SS – FINISHED 2ND
WHAT A GREAT RUN TODAY
“Yeah, it was a really good day for our Cessna/McDonald’s Chevy. We ran 5th and 8th all day long. Matt McCall (crew chief) made a really good decision at the end to stay out and got us on the front row. That was a fun battle with Kevin (Harvick). Those are the kinds you wish you could do over again, because I would have slid up earlier. It’s similar to plate racing with the engine package we have now, where if you don’t get the guy cleared he can kind of stall you out a little bit. And I saw Kevin coming and I thought I could slide up in front of him, but I also knew it was for the win and that we would probably have wrecked there. But it was a good team effort with great pit stops all day. Our team is as good or better than where we left off last year, and it’s a great feeling.”

RYAN NEWMAN, NO. 31 QUICKEN LOANS CHEVROLET SS – FINISHED 3RD
IT SEEMED THE RESTARTS WERE A BIT CHALLENGING TODAY
“Yeah, our Quicken Loans Chevrolet was good but just not quite good enough on restarts, especially with cold tires. But it was an awesome job by the guys, especially the pit crew. We’re knocking on the door. That’s two Top 3’s in a row. But it was a good points day. We’re four races in and we’ve got two Top 5’s. It took us until June last year to get our first one. So, we’ll keep digging.”

KASEY KAHNE, NO. 5 FARMERS INSURANCE CHEVROLET SS – FINISHED 4TH
TOP FIVE FINISH IN YOUR 400TH CAREER START TALK ABOUT YOUR DAY:
“It’s neat to have 400 starts in NASCAR, straight starts, I hope I get 400 more. It felt really good just not quite as fast as a couple of those guys. That changed throughout the race. Harvick was the only one better than us the entire race. Other than that it was guys switched throughout the race. It was surprising kind of how that changed up, but my Farmers Insurance team did a great job and we keep gaining each week.”

“We’ve had momentum all season. We’ve run in the Top 10 and have had cars that can finish in the Top 5 each week, so I’m really happy with our Farmers Insurance team. It’s pretty neat. A top-five it’s been a little while. So, we’ve got to keep working hard to catch up to Kevin (Harvick). Kevin drives a great race and they have a lot of speed. They have for a while. We’re working hard. Keith (Rodden, crew chief) is doing a great job and the team really stepped-up throughout the race again today. So, that was nice. We lost a little bit with adjustments and got it back at the end.”

KURT BUSCH, NO. 41 HAAS AUTOMATION CHEVROLET SS – FINISHED 5TH
WHAT DOES THIS PERFORMANCE MEAN TO YOU, PERSONALLY?
“It means I’ve got a strong team. And personally it’s great to get back to them and produce a result like this on our first day back. It’s a quality car. Haas Automation and Gene Haas and everybody that’s there; I went over and visited the headquarters this week and I can’t thank them enough for believing in me. The truth will be shown later on. But, the way that we raced today, it was with heart. And I thought there had been enough good will in the bank to try bring home a win. But Kevin (Harvick, race winner) was tough. Congratulations to my teammate, Kevin Harvick for winning. We had a great day. To run up there and almost lead a lap; I was just too loose on restarts and couldn’t quite capitalize on some of those positions that I needed to gain early in a run. But thanks again to all my sponsors and Chevrolet and everybody that’s part of our team and the whole group at Stewart-Haas. Thank you.”

MARTIN TRUEX, JR., NO. 78 FURNITURE ROW CHEVROLET SS – FINISHED 7TH
TALK ABOUT YOUR DAY IT SEEMED KIND OF UP AND DOWN:
“It was good. We had a lot strong car I think than seventh. We got that one set of tires that one pit stop and we restarted fourth or fifth. We were just completely sideways that whole run and the whole next run. We got tore up on pit road and had to go back to 24th. It was a hell of a rebound. A really good pit call by Cole (Pearn, crew chief) to stay out on the last pit stop. We were able to pass a couple of cars there at the end and get a top 10. I felt like we had a better car than that, but with the circumstances today, with 50 to go I felt there was no way we were going to finish top 20. To get a top 10 feel good.”

JEFF GORDON, NO. 24 DRIVE TO END HUNGER CHEVROLET SS – FINISHED 9TH
ON HIS DAY:
“It was a really great team effort. A nice job in the pits. We had a decent race car and we showed that as we got track position. It certainly wasn’t easy, but I’m real proud of everybody. There at the end it was just kind of a judgement call whether to come in and take tires or not. As it turned out that might not have worked in our favor, but hey some of those are going to go your way and some of those aren’t.”

KYLE LARSON, NO. 42 TARGET CHEVROLET SS – FINISHED 10TH
ON BOTH CHIP GANASSI RACING WITH FELIX SABATES CARS FINISHING IN THE TOP 10:
“It was a good day for everybody at Chip Ganassi Racing. Jamie (McMurray) did a great job to finish second there. I was pulling for him there at the end, but I was happy to get a top 10. 10th to 12th is about where we should of ended up. Lost two spots there that last lap, but it was a hard fought day. Our car wasn’t the greatest, but we kept working on it and got it better and salvaged a pretty good finish.”

JIMMIE JOHNSON, NO. 48 LOWE’S CHEVROLET SS – FINISHED 11TH
BIZARRE DAY FOR YOU INVOLVED IN A CRASH ON LAP 1 AND THEN CONTACT ON PIT ROAD ALL IN ALL A GOOD DAY TO DRIVE THROUGH THE FIELD TWICE:
“Just terrible luck today and killed the fronts. Lap 1 we had damage we had to go to the back and then at the three-quarter mark of the race I don’t know what happened on pit road. We were like three wide and then somebody came out of the pits and we got damage again. Decent car we should have been top five, but just frustrating to have to go to the back twice like that.”

DALE EARNHARDT JR., NO. 88 NATIONWIDE CHEVROLET SS – Blew a right rear tire in Turn 2 on Lap 181
WHAT HAPPENED?
“The car was really, really loose today and just wore the right rear tire out, and blew the tire.”

ARE YOU OKAY?
“Yeah. We’ll try to get it fixed up and get back out there.”

WHAT HAPPENED OUT THERE?
“We blew a right-rear tire, just real loose wore the tire out.”

IS THERE A PROBLEM WE SAW SAM HORNISH HAVE THE SAME PROBLEM?
“No, you can’t wear the tire out. You have to get your car handling better.”

IS IT JUST HOT OUT THERE? ARE YOU GUYS SLIDING AROUND AND STUFF?
“Well it’s going to be hot a lot of races. We just have to get the balance better where we don’t burn the tire off of it.”

DID YOU HAVE ANY WARNING AT ALL?
“They never tell you they are going to blow out (laughs), never. You don’t ever have a warning. It will be alright.”

About Chevrolet:
Founded in 1911 in Detroit, Chevrolet is now one of the world’s largest car brands, doing business in more than 140 countries and selling more than 4.8 million cars and trucks a year. Chevrolet provides customers with fuel-efficient vehicles that feature engaging performance, design that makes the heart beat, passive & active safety features and easy-to-use technology, all at a value. More information on Chevrolet models can be found at www.chevrolet.com.