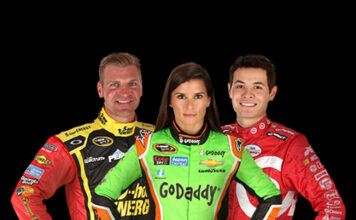 You never know who will win. That’s what makes voting so important. Polls are open for the 2015 Sprint Fan Vote – and unpredictability will take center stage until the NASCAR Sprint All-Star Race on Saturday, May 16. Fans can vote their favorite Sprint Fan Vote-eligible driver into the All-Star Race by casting ballots daily. Voting closes at 7 p.m. ET on Friday, May 15, one day before the green flag.

For the first time in program history, votes shared via Facebook and/or Twitter will count as double towards a driver’s total. Fans can vote daily with a maximum of one vote per day per unique email address by downloading the NASCAR MOBILE application or visiting NASCAR.com/SprintFanVote. Eligible voters can also enter into the Sprint Fan Vote sweepstakes, in which one lucky Sprint Fan Vote participant will win a trip for two to any 2015 Chase for the NASCAR Sprint Cup race.

The winner of the Sprint Fan Vote will be announced in Victory Lane following the conclusion of the Sprint Showdown at Charlotte Motor Speedway onFriday, May 15.

To date, 32 drivers are eligible for the 2015 Sprint Fan Vote. Eligibility for participation is restricted to those drivers who have been approved by NASCAR for NASCAR Sprint Cup Series competition and have met all other eligibility requirements. Amongst those eligibility requirements, drivers must have attempted to qualify for the 2015 Daytona 500 and race in the Sprint Showdown. Any eligible Sprint Fan Vote candidate who wins a NASCAR Sprint Cup Series race during the 2015 season will automatically earn a spot in the NASCAR Sprint All-Star Race and the driver’s name will be removed from the Sprint Fan Vote ballot with their existing votes voided.

To engage in the #SprintAllStar Race conversation throughout the #SprintFanVote window, fans are encouraged to follow @MissSprintCup,@CLTMotorSpdwy and @NASCAR on Twitter.

Fans can catch the entire weekend of May 15-16 All-Star action for just $99, including the Sprint Showdown, North Carolina Education Lottery 200, Rayovac presents Little Big Town pre-race concert, NASCAR Sprint All-Star Race qualifying and the biggest all-star event in sports, the NASCAR Sprint All-Star Race. For an additional $20, fans can purchase a special Golden Ticket for early stagefront access to the Little Big Town concert. Tickets can be obtained by calling 1-800-455-FANS (3267) or online at www.charlottemotorspeedway.com.

The 32 drivers (as of March 19) eligible for the Sprint Fan Vote include:

No purchase necessary to enter or win. Void where prohibited. Open to legal residents of the fifty (50) United States and the District of Columbia who are at least 18 years of age at the time of entry. Sweepstakes/Promotion entry period begins at 12:00:01 a.m., Eastern Time (“ET”), on March 8, 2015 and ends at 7:00:00 p.m., ET, on May 15, 2014. For complete rules, visit http://www.nascar.com/sprintfanvoterules.  Sponsor:  Sprint Communications Company, L.P. NASCAR, Inc. is not a sponsor of the Sweepstakes/Promotion.

Sprint (NYSE:S) is a communications services company dedicated to delivering the best value in wireless. Sprint served 55 million customers as of September 30, 2014 and is widely recognized for developing, engineering and deploying innovative technologies, including the first wireless 4G service from a national carrier in the United States; leading no-contract brands including Virgin Mobile USA, Boost Mobile, and Assurance Wireless; instant national and international push-to-talk capabilities; and a global Tier 1 Internet backbone. Sprint has been named to the Dow Jones Sustainability Index (DJSI) North America for the last four years. You can learn more and visit Sprint at www.sprint.com or www.facebook.com/sprint andwww.twitter.com/sprint.

For more than 50 years, Charlotte Motor Speedway has set the standard for motorsports entertainment for fans of all ages.  Charlotte Motor Speedway is the only race vacation destination where fans can immerse themselves in the heart of NASCAR country.  Visitors can attend one-of-a-kind race spectacles such as the NASCAR Sprint All-Star Race, Coca-Cola 600 and Bank of America 500; take behind-the-scenes speedway and race shop tours; explore the NASCAR Hall of Fame; and drive an 800-horsepower stock car. Through every event and every decade, Charlotte Motor Speedway puts FANS FIRST with a never-ending commitment to enhance the fan experience.  That tradition continues with unmatched value through affordable season tickets, unparalleled pre-race entertainment and more opportunities for fans to see their favorite drivers.