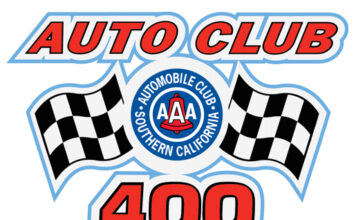 Ganassi at ACS: As a car owner in the NASCAR Sprint Cup Series (NSCS), Chip Ganassi has fielded cars for 11 different drivers that have made a start at Auto Club Speedway (ACS).  Of those drivers, they represent eight different states (California [2], Florida, Georgia, Indiana, Missouri, New Jersey, Pennsylvania and Tennessee. and two foreign countries (Scotland and Colombia). In 53 starts, Ganassi drivers have completed 12,190 laps (24,380 miles) and led 186 laps around the two-mile oval.

Follow CGR on Twitter:  Be sure to follow CGR on their official team Twitter page.  Find in-race updates and weekly news on the No.1 and No. 42 teams throughout the 2015 season by following “@CGRnascar”. You can also connect in the social conversation throughout the season with team hashtags – #TeamTarget, #TeamMcD

@KyleLarsonRacin: Worked hard all day to get a top 10. Not my best track so a top 10 is okay but we need to get better. Congrats @KevinHarvick you’re unreal.

@jamiemcmurray: Solid weekend for us. Complete team effort…great cars, setups, pitstops and calling the race. @CGRTeams is going to have a great year

WHAT YOU NEED TO KNOW FOR AUTO CLUB SPEEDWAY

Jamie McMurray and No. 1 McDonald’s Team

Phoenix Recap: The fourth stop on the 2015 NSCS season at Phoenix International Raceway (PIR) offered some hot competition in the “Valley of the Sun”, as the No. 1 Cessna team capped-off a strong run with a late-race battle en-route to a season-best second-place finish in the Arizona desert.

McMurray at ACS: McMurray will make his 20th career NSCS Start this weekend at ACS. In his 19 previous starts McMurray has two poles, six top-10 and three top-five finishes, with an average start of 19.9 and average finish of 17.2.  McMurray has never had a DNF (Did Not Finish) at the Southern California track, where he has a best finish of fourth on two occasions (2004 & 2005).

Phoenix Results: As NASCAR’s west coast swing continued, teams returned to Phoenix International Raceway (PIR) for the fourth race of the 2015 NASCAR Sprint Cup Series (NSCS) season. While the weekend would provide some challenges, Kyle Larson and the Target team worked hard throughout the race to secure a 10th-place finish.

Larson at Auto Club: Larson will be making his second NSCS start at ACS this weekend. The race weekend last year served as somewhat of a coming party for the Northern California native. Larson scored his first win in the NASCAR XFINITY Series (NXS) at ACS last year, and followed that up the next day by narrowly missing out on his first NSCS win, finishing second, to winner behind Kyle Busch. It was the first runner-up finish for Larson, who started the race in 11th position. Larson has two previous starts at ACS in the NXS, where he has a first and sixth-place finish.

Pretty Sporty: Larson, who is from Northern California and stayed near home during the west coast swing, found plenty of time to check out other sports over the past couple of weeks in between races. Larson kicked off his sports tour by checking out the San Jose Sharks game against the Pittsburgh Penguins, which is owner Chip Ganassi’s hometown team. Larson moved from the rink to the diamond in Phoenix, where he threw out the first pitch at the Los Angeles Dodgers’ spring training game against the Cincinnati Reds. Finally, it was a stop to the court in Sacramento, where Larson spent time with his hometown Sacramento Kings prior to their game against the Atlanta Hawks. Larson took time while at the Kings’ game to speak with media, promote the June 28th NSCS race at Sonoma Raceway and give away some passes for the race to several lucky fans.

A Shopping Bullseye: If you have made it to the race only to find out you’ve forgotten to pack a few necessities, there’s no need to worry.  For all your last minute needs, and forgotten items, Target has all of the essentials and more. Target is located at 16964 Slover Avenue, Fontana, CA 92337 and can be reached at (909) 356-4242. Call ahead and make sure they have what you need.

Official Release
Previous articleHot 20 Heading to California, The List of who is Not Hot is an Impressive one
Next articleLet The Fans Be Heard: Sprint Fan Vote Returns