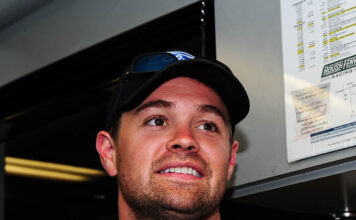 The driver of the No. 17 Ford EcoBoost Ford for Roush Fenway Racing took to the links for the Artie Kempner Drive for Autism golf tournament event on Thursday prior to practice and qualifying on Friday at the Dover track.

“It’s really neat,” Stenhouse said. “This was the third or fourth year that I’ve been involved with the Drive for Autism golf tournament. Artie Kempner is a great guy in our garage and very well-respected.  He really enjoys us coming and schedules it at a perfect time so we can attend.”

While Stenhouse enjoyed the golfing, for him the Drive for Autism tournament is all about the kids, many of whom are on the autism spectrum, who are there to see their racing heroes.

“We sign in and then we get to meet all the kids,” Stenhouse said. “You see how excited they are for you to be there and to be helping to raise money for autism. All of the kids are sitting at tables and everyone goes around and signs autographs. We do hero cards so they can have those.”

“Then then you see how much everyone raises in that golf tournament alone and how much it is used to help kids with autism, especially for kids who are transitioning out of school and into adulthood and getting jobs.”

Stenhouse will also be carrying the puzzle piece Autism logo on his No. 17 race car, as are most of the other drivers in the Roush Fenway stable.

“We just play a small part in calling attention to autism,” Stenhouse said. “We don’t think we’re helping that much by putting a sticker on the car but in other people’s eyes, it is a big thing.”

“So we really enjoy helping out.”

While Stenhouse and his team, including fellow driver Danica Patrick, did well in the Drive for Autism golf tournament, he was most proud of his team’s performance during the putting contest.

“The golf game was good,” Stenhouse said. “We shot really well as a team – Danica and three other guys that are very good at golf. We had a lot of fun and ended up shooting sixteen under.”

“We birdied every hold but two and then we got to the putting contest. And Danica won that contest so that was really exciting.”

“She was the only one out of every group that got that putt. It was probably a 40 foot putt to the right. A couple of us got really close; I think mine hit the edge of the cup and kept going past. I had a little too much speed on mine. Hers was dead center.”

“So, the golf was fun, the event was fun. We had to stop one time because of lightning but it never rained. We had a good time.”

After conquering the golf event, Stenhouse Jr. turned his attention to the second part of the Dover double down by taking the track at the Monster Mile. He was fourteenth in the first practice with a speed of 162.104 and a time of 22.208.

“It is a tough track,” Stenhouse said. “We’ve had some decent runs here in the Cup car and in the Xfinity car, with some top-fives. The Cup car we haven’t been real fast but we’ve gotten some solid finishes out of it.”

“So, this week so far I think we’ve got a better race car than what we had here last year. It’s a real fine balance of if you get your car too tight or too loose and where in the corner is your car good. You’d like to be dead on the bottom and run around there. But in the race, that line gets all rubbered up and real slick.”

“So, the first practice went really well and hopefully we can continue from there.”

Stenhouse also acknowledged the importance of qualifying, the difficulty of pit road and the changes in the tires and set up that happens at the Monster Mile.

“I think the toughest thing at Dover is you have to qualify well because it’s hard to pass,” Stenhouse said. “But the biggest thing is getting to pit road under green. It’s really tricky. I’ve seen some crashes right around me coming to pit road. So, I always like to be a little cautious coming to pit road, especially the first few times under green flag conditions.”

“The tires are different,” Stenhouse continued. “But it’s the same for everybody. “When you go out in practice and you see say Jimmie Johnson being at the top of the leaderboard, he’s got the same tires you’ve got. So, you just work on it and try to be the fastest with that set of tires.”

“It’s a challenge every year having different stuff but it’s good for us when we’re changing our cars around. I feel like we’re getting better cars. And a different tire makes everyone change their set ups around. So, maybe we can catch up a little quicker when they do change tires.”

Another factor that will apparently rear its potentially ugly head at the Monster Mile and have an impact on Stenhouse’s double down is the weather.

“It looks like Sunday may not be very good weather but we got cloud coverage now for practice,” Stenhouse said. “Hopefully it will stay like that all weekend. I would say the cloud cover or not is the biggest thing with race tracks. The sun really seems to affect the race track quite a bit.”

“Right now, I think we feel everything will be comparable with the cloud cover that we have.”

In spite of the potential weather and other challenges, Stenhouse Jr. expressed his hope that this is a lucky weekend with good odds for a stellar finish for his Roush Fenway team.

“We were good in practice and we were close,” Stenhouse said. “So, a little bit more and we could be really good but we don’t want to over-adjust it. We’re making small changes and trying to keep us in the game.”

“Greg (Biffle, teammate) has been really good here and Roush Fenway has had some really good runs here as well,” Stenhouse said. “So, we’ve got a lot of good notes.”

“Now that the horsepower is down, similar to the XFINITY cars, we’ve got a lot of laps at these tracks in low horsepower. We feel really good about what I need to feel out on the race track to be fast.”

“We’re a little bit closer this weekend than the last two times here so I’m looking forward to a good run.”