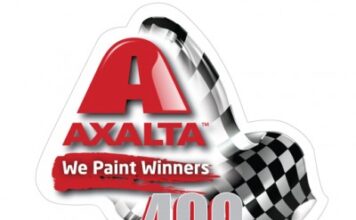 Menard ranks 11th in the Sprint Cup Series championship point standings, trailing current leader Kevin Harvick by 174 points, while Newman ranks 15th and Dillon 24th.
Martin Truex Jr., earned his first win of the 2015 season and was followed to the line by Kevin Harvick, Jimmie Johnson, Joey Logano and Kurt Busch.
The 15th race of the 2015 Sprint Cup Series season is the Quicken Loans 400 at Michigan International Speedway on Sunday, June 14, 2015, which is scheduled to be televised live on FOX Sports 1 beginning at 1 p.m. Eastern Time and broadcast live on the Motor Racing Network and SiriusXM NASCAR Satellite Radio, channel 90.Austin Dillon Earns Season-Best Qualifying Effort Enroute to 19th-Place Finish at Pocono RacewayAustin Dillon and Richard Childress Racing’s No. 3 team once again honored veterans at Pocono Raceway this weekend by running a special patriotic paint scheme that featured names of 370 Dow employees who are veterans of the U.S. military on a silver, red, white and blue No. 3 Chevrolet SS. Dillon earned his best NASCAR Sprint Cup Series starting position of the season – sixth – for Sunday’s 400-mile race at the Long Pond, Pa.-based track. The Welcome, N.C.,

The Welcome, N.C., driver noted a loose-handling condition on his initial run and slipped to 14th in the running order. The Gil Martin-led team took advantage of pit stops under green-flag and caution-flag conditions to make right-side wedge adjustments to the No. 3 Chevrolet in an effort to improve handling conditions. By the race’s halfway mark, Dillon was scored 10th in the running order. Following a caution on lap 87, the Dow Racing team opted to stay on the racing surface in order to gain additional track position. They were credited with leading five laps before pitting under green-flag conditions on lap 94 for four tires, fuel and additional right-side wedge adjustments. Following the pit stop, Dillon was scored in the 24th position but the team gambled by pitting for right-side tires during subsequent pit stops in order to gain track position. Dillon was scored in the 13th spot with 35 laps remaining but battled a tight-handling condition in traffic, eventually finishing 19th in the Dow Chevrolet. Dillon will race the No. 3 American Ethanol Chevrolet in the Quicken Loans 400 at Michigan International Speedway live on FOX Sports 1 at 1 p.m. Eastern on Sunday, June 14.

Following the pit stop, Dillon was scored in the 24th position but the team gambled by pitting for right-side tires during subsequent pit stops in order to gain track position. Dillon was scored in the 13th spot with 35 laps remaining but battled a tight-handling condition in traffic, eventually finishing 19th in the Dow Chevrolet. Dillon will race the No. 3 American Ethanol Chevrolet in the Quicken Loans 400 at Michigan International Speedway live on FOX Sports 1 at 1 p.m. Eastern on Sunday, June 14.

“We were just too tight in traffic at the end of the race today. I hate it for the Dow Chevrolet team. Our car was so good on Friday and I was really hoping to parlay that into a great finish on Sunday, but overall we are making progress and I am excited for Michigan International Speedway next weekend. We’ve had some great success there in the past.”A Series of Unfortunate Events Earns Paul Menard a 31st-Place Finish at Pocono RacewayPaul Menard drove the No. 27 Schrock/Menards Chevrolet to a 31st-place finish at Pocono Raceway after a pit road violation and cut-down tire thwarted a strong finish. The Eau Claire, Wisc.-native started the 400-mile race from the 16th position and battled a loose-handling condition during the first green-flag portion of the event. Menard used the driver-adjustable track bar to fix the handling of his machine until a green-flag pit stop on lap 25. The Menards/Schrock driver brought his neon yellow Chevrolet SS to the attention of his crew for four fresh Goodyear Racing tires, fuel and a chassis adjustment. NASCAR deemed Menard too fast  exiting on pit road, therefore forcing the driver to complete a pass through penalty. While serving the penalty, he was once again deemed too fast and then needed to complete a stop-and-go penalty. Upon leaving the pit stall, a lug nut sliced the inner valve stem resulting in a cutdown left-side tire. It  forced Menard to return to pit road for a third time. The caution flag flew on lap 49 allowing Menard to take the wave around and receive one of his laps back and restart in the 41st position. Crew chief Justin Alexander used strategic pit calls throughout the remainder of the race to move Menard higher in the running order. The afternoon’s final caution flew on lap 134. Good on fuel to the finish, the Chevrolet driver stayed out under this yellow flag. Menard restarted 33rd with 16 laps remaining and moved up to take the checkered flag in the 31st position. The No. 27 Menards Chevrolet team moved up to 11th in the NASCAR Sprint Cup Series championship point standings.

“Hopefully, we got all of our bad luck out of the way today. It was a tough day for the Schrock/Menards team as a series of events didn’t go our way. I’m proud of the calls Justin (Alexander) made and the work the guys did on pit road. Now on to one of my best tracks, Michigan International Speedway.”

Ryan Newman drove Richard Childress Racing’s No. 31 Grainger SS to a 39th-place finish in Sunday’s Pocono 400 at Pocono Raceway. The South Bend, Ind., driver started 13th, raced into the top five by lap 50 and cruised comfortably in the top 10 at halfway of the 188-mile event. Interim-crew chief Todd Parrott implemented a pit strategy to help maximize track position. On the lap-124 restart, Newman lined up 20h and climbed to 11th before a caution flag waved on circuit 128. The driver of the Grainger Chevrolet received instructions to conserve fuel.  Shortly after the restart on lap 139, a competitor made contact with Newman while he raced in 10th position. The damage sustained by the wreck was too much to overcome forcing the Grainger team to the garage and a finishing result of 39th place. Next Sunday the NASCAR Sprint Cup teams will be back in action for the Quicken Loans 400 at Michigan International Speedway.

Quicken Loans will be the primary partner on the No. 31 Chevrolet.

“My Grainger team gave me are car capable of a top-10 finish, and then some. Unfortunately we weren’t able to see it come to fruition because we got involved in a wreck. It’s a shame that we couldn’t get the finish we deserved for Grainger, so now we’ll have to focus on the Quicken Loans 400 and rebound like I know we can.”

Official Release
Previous articleBiffle Leaves Pocono 12th in the No. 16 Ortho Ford Fusion
Next articleSurprising and Not Surprising: Pocono Axalta We Paint Winners 400